The artillery strike took place near the city of Zaporizhzhia in the south-eastern Ukrainian region of Zaporizhzhia Oblast.
By Lee Bullen May 2, 2022
Facebook
Twitter
Linkedin
Email 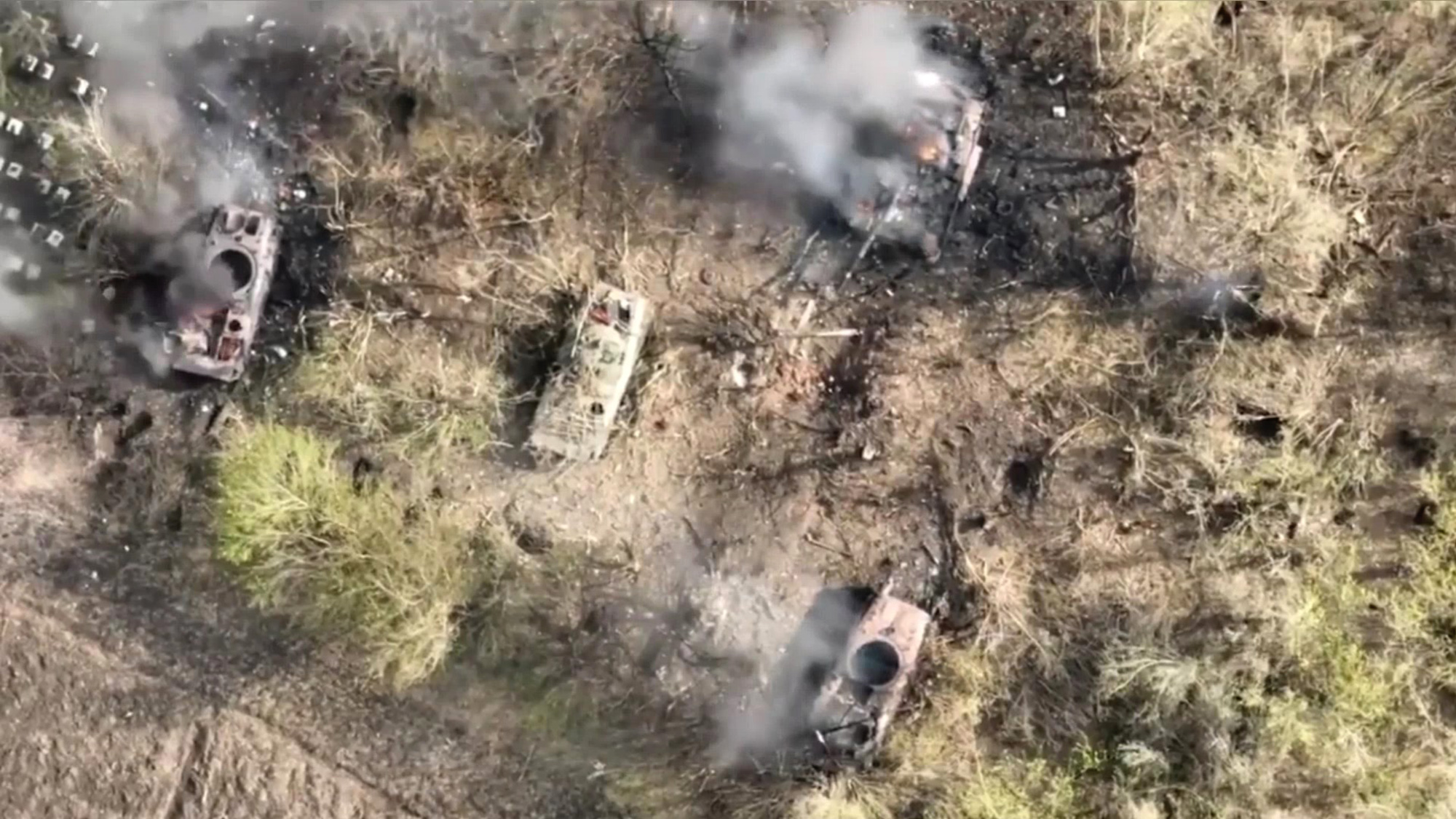 Ukrainian Armed Forces destroyed tanks and vehicles of the Russian Army in the Zaporizhzhia direction, Ukraine, in April, 2022. (General Staff of the Armed Forces of Ukraine/Zenger)

Russia’s tank troops are said to have suffered severe casualties after a precision blitz by Ukrainian artillery.

Footage of the aftermath shows a group of Russian tanks on fire and several that have had their turrets blown right off.

“The result of Ukrainian artillery. Let’s win together!”

The footage shows smoke billowing from several armored vehicles after apparently being struck by Ukrainian missiles.

Russia invaded Ukraine on 24th February in what the Kremlin called a “special military operation”. Today marks the 63rd day of the invasion.

Yesterday, one of the last remaining Ukrainian commanders holed up in the Mariupol siege told of the nightly gauntlet of air raids and artillery.

And he bitterly blamed Russia for the waste of the billion USD it had poured into the siege, which could have been used to build “schools, hospitals, universities”.

In an accompanying statement,  the Azov Regiment – a unit of the National Guard of Ukraine based in devastated Mariupol, in south-eastern Ukraine said (in Ukrainian): “Address from the Deputy Commander of the Azov Regiment, Captain Svyatoslav Palamar, Kalina, regarding the situation in Mariupol today.

“This night is just a colossal number of air strikes, phosphorous bombs, missiles, artillery and everything that a barbarian can use against humanity.

“For all military words and actions are one and the same. Therefore, it is difficult for us to understand why we are promised and not acted upon.

“In total it is 1,111,200,180 dollars without expenses for fuel, equipment, medical evacuation, food and other things.

“Think that this money is equal to the opportunity to build 163 schools, or 273 kindergartens, or 12 modern hospitals, 32 maternity hospitals or 82 pharmacies. This is only Mariupol. I’m not talking about Ukraine as a whole.

“Do not believe in our statistics – ask the official authorities in Russia how many died on the cruiser Moskva?

“I call on the military-political leadership to take decisive action to release or evacuate all those who hope and believe in the Homeland.

“Today I will say that Mariupol is not Ukraine, but Ukraine is Mariupol.”

In Captain Palamar’s address, he says (in Ukrainian but with subtitles in English): “We calculated approximate cost that Russians wasted on war in Mariupol instead of building schools, hospitals, universities or at least provided a decent aging for the pensioners.

“These numbers are colossal.

“It is unimaginable for a normal person to understand the logic of this war in Ukraine.

“The compensation for wounded and killed soldiers in Mariupol will cost Russian government 661 000 000 USD.