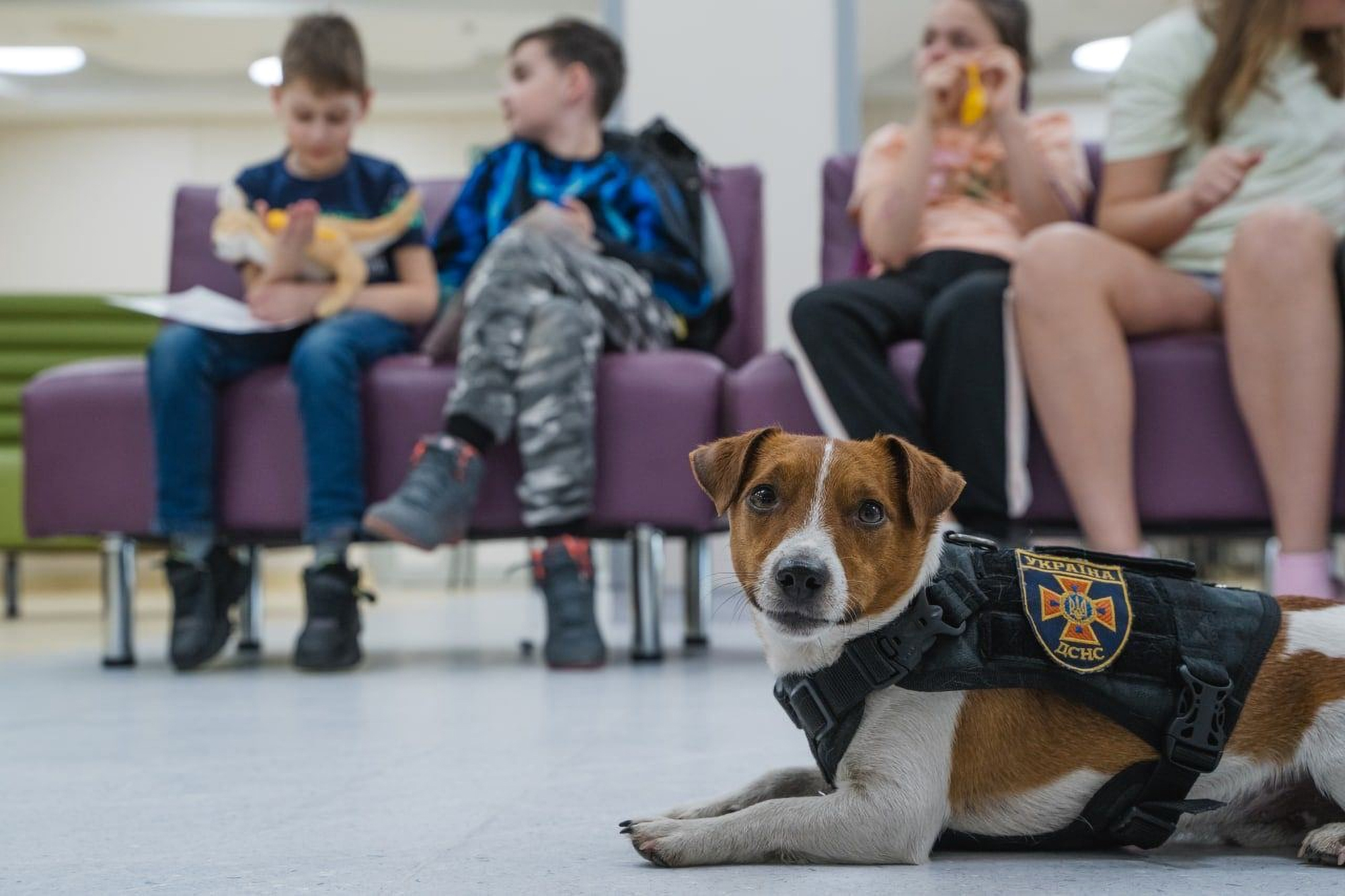 Patron and the team visited children at the hospital, in Kiev Ukraine, to teach them about the dangerous consequences of military actions, on 28th April. (State Emergency Service of Ukraine/Zenger)

The two-year-old Jack Russell Terrier was there to make the kids smile and also to educate them on the danger of landmines.

The Ukrainian SES said: “Even if you are small and circumstances independent of you force you to fight for your life and place under the sun – DO NOT GIVE UP.

“Go to the end, fight and never let go. Dig the ground on the way to your dream and do not let circumstances despair.

“This is exactly what our baby Patron told children in the capital’s OKHMADIT [Children’s Hospital] today [Thursday], as well as about the current threats to children’s safety.”

They added: “To do this, he came from Chernihiv, where he helps his master every day in the fight against the explosive consequences of hostilities.

“The little dog, who has already become a real symbol of the fight against the giant Kremlin killing machine, has traveled several hundred kilometers and met with those who are just as desperate for support in this terrible time.

“The war will surely end, and every boy and girl who will finally be able to walk freely on their favorite streets should know that the enemy has left behind many insidious ‘gifts’.

“That is why the SES Emergency Prevention Specialists conducted this important security event.”

Patron the sniffer dog has become a symbol of hope and defiance amid the deadly conflict currently engulfing Ukraine.

And he was also seen enjoying his well-earned reward of fresh cheese at the end of a hard day cleaning up landmines.

The pooch is said to be the star landmine finder and mascot of the Chernihiv bomb disposal squad of the Ukrainian SES.

Though Russian troops withdrew from around Chernihiv and Kyiv earlier this month to regroup in eastern Ukraine, several Russian airstrikes hit the capital yesterday.

Enemy attacks were also reported in Fastiv and Odesa, despite the focus of the Russian invasion now ostensibly being on the Donbas region.

In its civilian casualty update on 27th April, the Office of the UN High Commissioner for Human Rights reported 2,787 killed and 3,152 injured since the invasion began.

Of the deceased, 202 were children, and 302 children are among the wounded.

Russian troops invaded Ukraine on 24th February in what the Kremlin is now calling a “special military operation” to “protect Donbas”. The invasion is now in its 65th day.