Researchers at the University of Bonn, Germany, have completed a new study of the remains, originally unearthed 30 years ago.
By William McGee May 2, 2022
Facebook
Twitter
Linkedin
Email 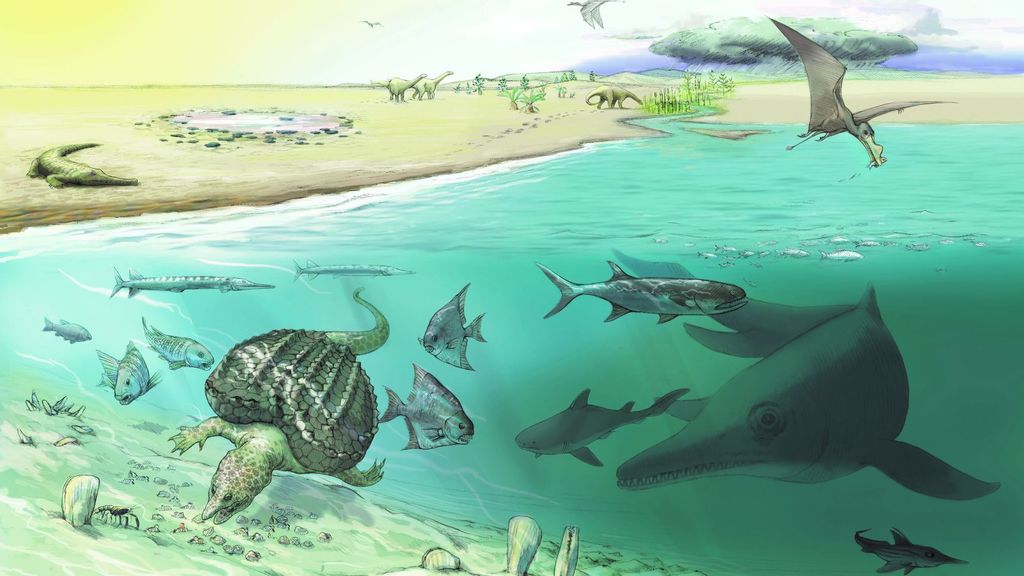 A monster dinosaur that ruled the world’s seas 250 million years ago has been discovered at the top of the Swiss Alps.

The fossil comes from a 60-foot ichthyosaurus and includes a giant tooth, from a razor-sharp set that could have snapped an alligator in half with a single bite.

Researchers at the University of Bonn, Germany, have completed a new study of the remains, originally unearthed 30 years ago.

Experts believe the remains – from three different specimens – were originally at the bottom of a prehistoric ocean but were forced up to the top of the newly-formed Alps tens of millions of years ago.

It was more than three decades ago that researchers from the University of Zurich first found the vertebrae, ribs and tooth in the High Alps of eastern Switzerland.

Given their shape, they had to originate from large marine ichthyosaurs, but little more was found at the time.

But now, a more precise classification of the species has been possible.

And the researchers have revealed that the tooth – which has a root diameter of six centimeters – is twice as large as the largest aquatic dinosaur tooth previously found.

At least one species survived until 90 million years ago.

Ichthyosaurs weighed an estimated 90 tonnes and were over 20 meters in length. Despite this, the fossil remains of the marine reptiles are scarce.

Dr. Martin Sander, Professor of Vertebrate Palaeontology at the Institute of Geosciences at the University of Bonn, said: “Why that is remains a great mystery to this day.”

However, he added: “Maybe there are more remains of the giant sea creatures hidden beneath the glaciers.”

The fossils studied were found in Switzerland’s Grisons canton between 1976 and 1990.

They were recovered by Dr. Heinz Furrer of the University of Zurich and students during geological mapping in the Koessen Formation.

The recovered material was all but forgotten, but the appearance of further giant ichthyosaur remains prompted a new analysis of the Swiss finds.

The study determined that the fossils belong to three different ichthyosaurs that lived around 205 million years ago.

From one of the specimens, a vertebra and 10 rib fragments are preserved, with their sizes suggesting the marine reptile was probably 20 meters long.

From a second specimen, only a series of vertebrae were recovered. After comparing them to better preserved skeletal finds, the researchers determined this second ichthyosaur was probably around 15 meters long.

But the most exciting discovery concerns the tooth.

Prof. Dr. Sander said: “Because this is huge by ichthyosaur standards: Its root was 60 millimeters in diameter – the largest specimen still in a complete skull to date was 20 millimeters and came from an ichthyosaur that was nearly 18 metres long.”

Dr. Furrer said: “The publication has confirmed that our finds at the time belonged to the world’s longest ichthyosaur; with the thickest tooth found to date and the largest trunk vertebra in Europe!”

Prof. Dr Sander warned, however: “The tooth diameter cannot be used to directly infer the length of its owner.”

This is because it is assumed extreme gigantism and a predatory lifestyle – requiring teeth – are not compatible, according to research.

Therefore, it is technically possible that the tooth did not come from a giant ichthyosaur but from an ichthyosaur with huge teeth.

«Previous Post
Binoculars Of War Vet Returned To His Family By Collector»Next Post
COVID 19: How Your Genes Affect Your Survival