Sarah, was diagnosed with bone cancer at the age of 11, then eight years later, Katie developed a brain tumor at the age of 25.
By Anamarija Brnjarchevska May 2, 2022
Facebook
Twitter
Linkedin
Email 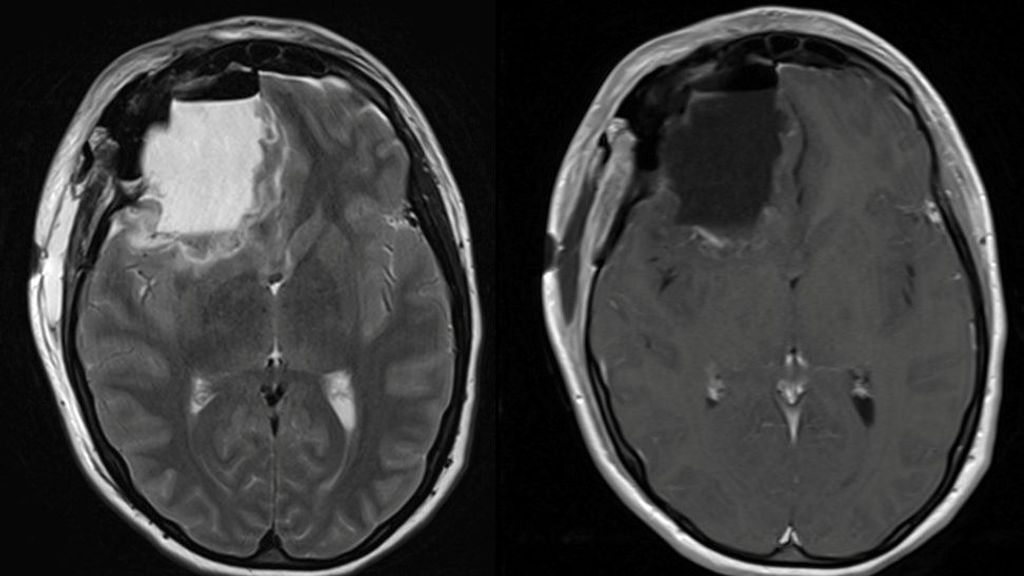 A mum has told of the random bad luck her family suffered when her two daughters were both diagnosed with cancer eight years apart. (Matthew Newby/Zenger)

A mum has told of the “random bad luck” her family suffered when her two daughters were both diagnosed with cancer eight years apart.

Both are now doing well after receiving treatment – including Katie who had the same surgeon who operated on US senator Ted Kennedy’s brain tumor – Dr Allan Friedman.

The tumor left a hole that took up nearly a quarter of her brain when medics removed it, Katie’s shocked mum said.

Now aged 31, Katie lives in Florida and was a varsity athlete on a US scholarship when she was struck down with a malignant brain tumor the size of a baseball in March 2016.

Sarah Ardrey is now aged 25 and “doing absolutely fine” after being treated for bone cancer at the age of just 11 in 2008.

Katie was living in North Carolina when she was diagnosed with a high-grade anaplastic glioma, having settled in the US after moving on a hockey scholarship at the age of 18.

She was “as fit as a fiddle” before being hit by a sudden migraine that made her feel “terribly sick” and she went to see a doctor for the first time in years.

Within 36 hours she received her diagnosis and just days later underwent brain surgery to have the tumor removed.

She went on to have six weeks of radiotherapy followed by 12 rounds of chemotherapy and is now being monitored with six-monthly scans.

Because of her age and the potential for her treatment to damage her reproductive system, Katie also underwent fertility treatment to enable her eggs to be harvested and stored.

Zoe, 55, of Shepperton, Surrey, said: “Talk about hitting us like a tonne of bricks. It makes me cross that they both had to go through this at such a young age.

“We had all the genetic tests done but were told it was completely random and just bad luck, but it certainly was a kick in the teeth.”

Describing her pride at her daughter’s response to their diagnoses, Zoe added: “I’m glad she [Katie] was there [the US] when she was diagnosed because she got the very best treatment.

“Katie always said ‘if Sarah can get through it, then so can I’. The two of them fill me with so much pride because I don’t think I could handle it as well as they did.”

Zoe, who works as an accounts department manager, described cancer as an “indiscriminate disease”.

She said: “It’s an indiscriminate disease – it doesn’t matter if you’re six months old or 60 years old, it can get you.

“If you’d said here’s a group of people with Katie in the middle and asked me who was most likely to get a brain tumor, I’d never have said Katie because she was so fit and healthy and never had anything wrong with her before this, but that’s the point isn’t it?

“Her tumor was the size of a baseball. Almost a quarter of her brain was a massive hole after they took it out. Cancer makes me so angry that I just want to do whatever I can to get rid of it.”

Motivated by her daughters’ fighting spirit and the recent death of The Wanted singer Tom Parker, who was Sarah’s favorite band, Zoe plans to dust off her running shoes to help raise money for brain cancer research.

She said: “I did a Royal Parks Half Marathon in 2014 and used to run quite a lot, but I’ve had several back and hip surgeries since then.

“I also now play hockey and don’t have time to run but I thought this challenge was the perfect opportunity to get going again.

“I’m quite fit so it’s not something that’s filling me with dread, it’s just needing to get my backside into gear to go out and run.

“To start with I’ll probably do up to three miles in one go but, as I get into the swing of it, I may be able to go a bit further.”

Zoe signed up to take part in the Brain Tumour Research charity’s Jog 26.2 Miles in May Challenge.

Katie Ardrey-Beatley added: “I’m not surprised that my mum is running in support of Brain Tumour Research as she has supported me and my sister with everything we’ve been through over the past few years.

“I know that by raising awareness through her fundraising efforts she hopes to prevent others from having to go through everything we have as a family.”

To take part in the challenge, join the Jog 26 Miles in May Facebook Group and follow the three simple steps to get started.

Once registered, Brain Tumour Research will send a free gift and printed mile tracker and anyone who raises £274 or more will get a special medal in June, once the challenge is completed.

Charlie Allsebrook, community development manager for Brain Tumour Research, said: “Katie’s story is a stark reminder of how indiscriminate brain tumors are, affecting anyone at any age.

“They kill more children and adults under the age of 40 than any other cancer yet historically just 1 percent of the national spend on cancer research has been allocated to this devastating disease.

“We’re determined to change this and are so grateful for the support of people like Zoe whose fundraising efforts enable us to continue funding vital research and to, ultimately, find a cure.”