All 10 of the world's hottest locations are in India and Pakistan. India's PM warns high temps will increase the danger of fires.
By Zachary Rosenthal May 2, 2022
Facebook
Twitter
Linkedin
Email 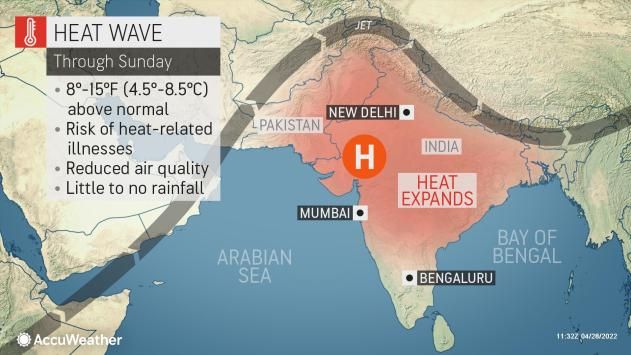 Temperatures have been consistently above normal this April in Indian cities such as New Delhi, home to more than 30 million people. Some Indians are blaming climate change for the scorching temperatures. (AccuWeather)

While parts of the eastern United States are dealing with lower-than-normal temperatures, thousands of miles away, India is baking under a new round of heat.

Worse, residents of the Indian subcontinent can expect the brutally warm air to linger.

It isn’t unusual for parts of India and Pakistan to have some cities among the top 10 hottest places in the world. What is unusual is how they are dominating the list. Looking at 24-hour daily highs, all 10 of the hottest locations were found in India and Pakistan, and the hottest temperature recorded on Earth at official weather stations Thursday was 116.6 degrees Fahrenheit (47 Celsius) in Jacobabad, Pakistan.

On Thursday, New Delhi nearly ranked among the world’s top 10 when it topped out at 109 degrees, about 5 degrees shy of the all-time record high temperature for April there, which is 114.1 F (45.6 C), measured on April 30, 2019, according to Jason Nicholls, AccuWeather senior meteorologist and lead international forecaster.

In contrast, Death Valley, California, famous for its reputation as one of the hottest places on Earth, hit a high temperature of 99 on Wednesday.

“We are getting a return gift from nature in the form of heat. Humans have worsened our environment. Owing to our increased use of air-conditioners and cars, I feel that the heat will keep rising,” Parul Bakshi, a resident of Chennai, India, told Reuters. “We see the climate changing rapidly.”

Meteorologists from the India Meteorological Department (IMD) found that March 2022 was the hottest March for India as a whole since 1901, with average highs jumping to a staggering 3.35 degrees Fahrenheit (1.86 degrees Celsius) above the climatological average.

India is no stranger to exceptional heat. Throughout the country, there are street vendors in major cities selling special fruit that supposedly helps protect people from the potentially damaging effects of above-normal temperatures.

“Instead of the regular synthetic fruits, you know, the ready-made fruit juice which is harm[ful] to the health, these are good for your health. These are the only way to manage the heat, especially the eye irritation, heartburn,” Muttharamalingam Subhramaniam a resident of Chennai, India, told Reuters.

At India’s zoos, the animals are also finding ways to cool off. Officials at a zoo in India’s Bihar state have installed new cooling equipment, including sprinklers and fans, to help birds, ostriches and white tigers cool off, according to Reuters.

“We have installed sprinklers to spray water on all the birds and to help maintain the temperature of the place,” a zoo employee told the news service. “We provide them all the chemicals they need for developing their immunity. Similarly, fans, coolers and exhausts have been installed in the animals’ areas, too.

The heat has also increased the demand for power in the country, which has resulted in electricity shortages in some regions. At least three Indian states have imposed power cuts on industrial activity, according to Reuters. At the same time, hospitals are seeing increased demand from patients suffering from heatstroke.

Indian Prime Minister Narendra Modi also warned that the heat wave, which has come earlier than many of India’s worst, is increasing the fire danger in the country. Burns at landfills also contribute to poor air quality, especially in urban areas like New Delhi, where the air quality on Thursday was at dangerous levels.

“We are seeing increasing incidents of fires in various places — in jungles, important buildings and in hospitals — in the past few days,” Modi told Reuters.

AccuWeather forecasters are not expecting much relief from the heat anytime soon, perhaps not until the monsoon season begins in June.

“A brief change in the weather pattern can bring some relief around next Tuesday or next Wednesday,” said Nicholls. “Any relief looks to be brief as heat is expected to return for the first full weekend of May.”

A similarly hot forecast is in store over in Jacobabad, which was Thursday’s global hotspot. The 116 reading may just be the “coolest” high temperature notched there until next Tuesday as hazy sunshine is expected to send the mercury soaring past the 120-degree mark on multiple days, according to the AccuWeather forecast.