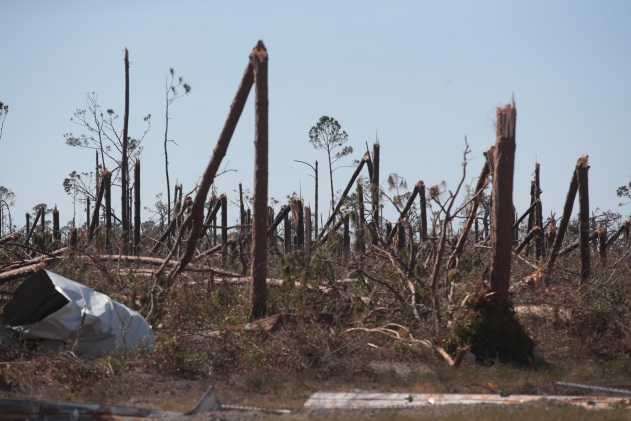 Hundreds of trees were snapped in pieces on Tyndall Air Force Base in the wake of Hurricane Michael on Oct. 17, 2018, in Panama City, Florida. (Scott Olson/Getty Images/Zenger)

How does one of Florida’s famed vacation destinations recover from devastation? For the citizens of Panama City, the answer is one tree at a time.

In October 2018, the vicious Hurricane Michael clobbered the Florida Panhandle, becoming the first Category 5 hurricane to do so in the state’s beleaguered weather history.

The most severe impact took place on the coastline, where Panama City and its more than 36,000 residents bore the brunt of it. Brutal winds, rain and storm surges took a heavy toll, with multiple fatalities recorded as well as the destruction of the local environment.

Over 26 square miles of tree canopy — an area four square miles larger than Pensacola, FL — was destroyed by the storm, with an estimated 1 million trees being downed in Panama City alone, according to a report by the Florida Forest Service. Millions of dollars worth of harvestable timber was lost.

Mass tree loss and deforestation, according to The Humane League, can have several negative aftereffects, such as the transfer of pathogens from displaced animals to humans and food insecurity.

Panama City has also experienced an uptick in flooding, according to WJHG, as a result of the loss of 80 percent of its tree canopy.

The devastation wrought by Michael left the city in a bind — one that prompted the creation of the ReTree PC initiative. Launched not long after Michael hit, the initiative was intended to unite the community one tree at a time. Through collaboration with a network of volunteers, ReTree PC aims to plant 100,000 trees in the Panama City area by the year 2025.

“It behooves both the city and the citizens that we serve to help replace that canopy,” said Panama City quality of life director Sean DePalma, who helps guide the ReTree PC program’s efforts.

To mark the annual celebration of Arbor Day (April 29), the organization is once again hosting a “tree care workshop.” Each year, ReTree PC hosts the event to educate the public on subjects such as protecting tree roots, tree planting and tree pruning. All participants in the workshop take home a seven-gallon Winged Elm tree, helping to bring plant life back to the community.

The workshops, DePalma said, increase the general public’s knowledge and act as extra training for specialists and city employees that support ReTree PC.

“We want our staff to be really qualified and knowledgeable on how to maintain and mitigate…tree care and tree health,” DePalma said. “We’re not just planting trees; we’re planting them the right way, planting them in the right place.”

DePalma also stressed the importance of involving Panama City’s youth, who are learning about the positive effects of planting trees, such as the prevention of erosion on the waterfront and protection from vicious storm surges.

To track progress with the 100,000-tree goal, ReTree PC received a grant worth $40,000 from the U.S. Department of Agriculture for iTree census technology. This software tracks and maintains a “tree census” in the city, allowing the organization to keep abreast of the number of planted trees and their locations.

The technology works not only on public land but on private properties as well, where much of the tree loss took place during the hurricane.

“As we develop new properties [in Panama City] and larger developments come in, we’ll start to add [them] to the [iTree] database,” DePalma said. He added that the software identifies the tree, its location, its condition, its type and size and the status of maintenance efforts applied to it.

“There’s a component of the tree program that gives an estimate of impact [showing] how that tree is helping us,” he said.

Thus far, ReTree PC has planted approximately 8,000 trees in public areas, such as local parks. Although the trees are new, some tangible effects can already be seen in the city.

“We’ve already started to see [progress]. …Trees are living beings,” DePalma said. “We lost, of that 80 percent [of tree canopy], a tremendous amount of trees that were 80-120 years old throughout some of our neighborhoods. We’re starting to see very small improvements, but we’ll start to see larger improvements [over] time.”