Sets of tracks were uncovered in a cemetery near Kiel, Germany, dating to the 3,400 years to the Stone Age Neolithic period.
By Martin M Barillas April 29, 2022
Facebook
Twitter
Linkedin
Email 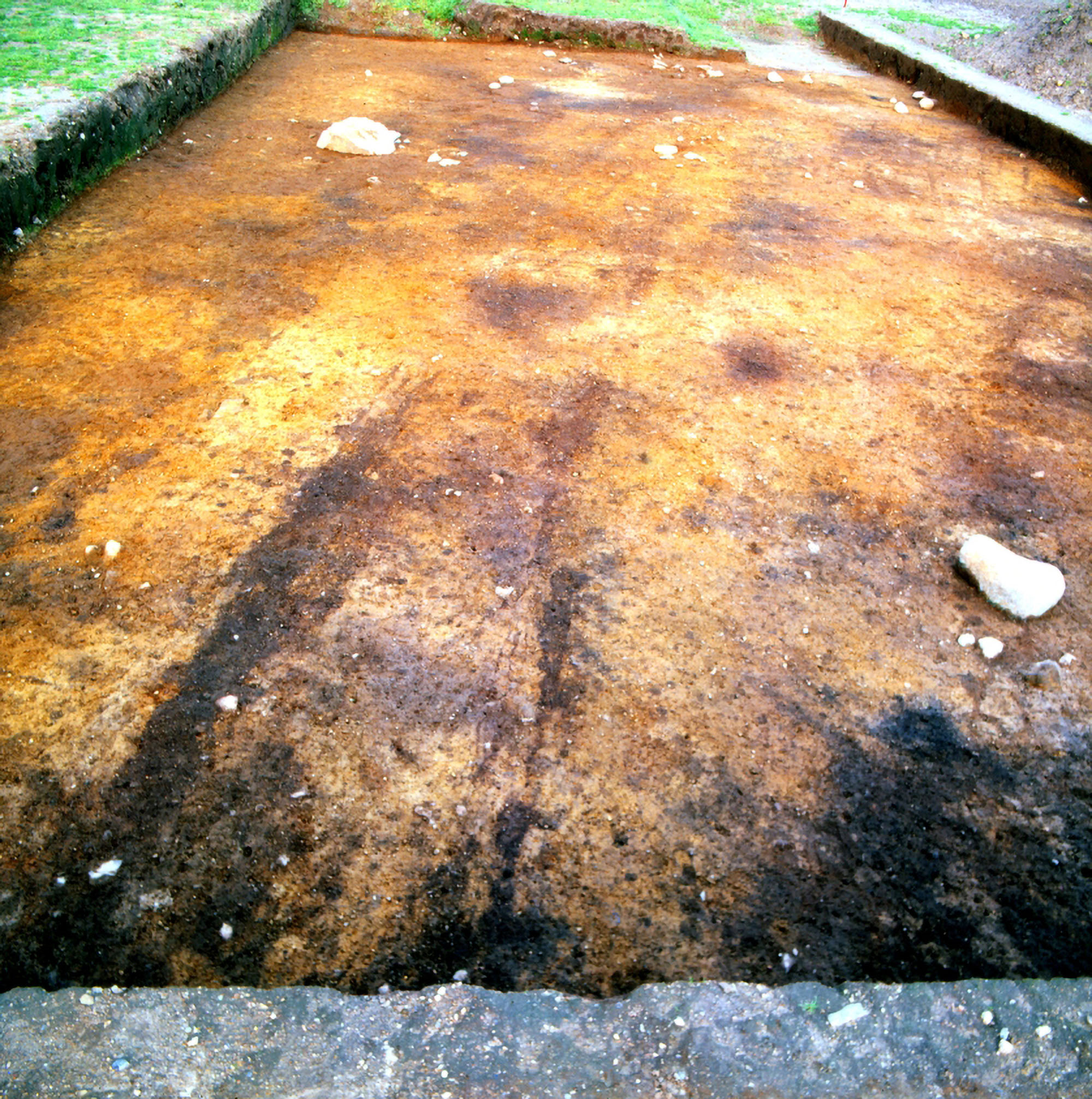 Both dark linear discolorations are the wagon tracks that the researchers discovered in one of the long barrows (LA3) of the Flintbek Sickle, Germany. (Dieter Stoltenberg/Zenger)

Archaeologists have unearthed what they say is the earliest use of wheels and wagons in northern Europe.

Sets of tracks were uncovered in a cemetery near Kiel, Germany, dating to the 3,400 years to the Stone Age Neolithic period.

In one of the largest cemeteries in Europe dating to the era when Stone Age humans were erecting stone monuments, scientists found two brown and otherwise inconspicuous lines inscribed in the earth that correspond exactly to the width of Neolithic wooden cart wheels.

The distance between both grooves corresponds exactly to the width of Neolithic wagon axles.

Based on the evidence, scientists have concluded in a new paper that the technology was new for the time and dates back as early as 3,400 BC.

However, a wooden wheel found in the Ljubljana Marsh near the capital of Slovenia in 2002 has been thought to be older, having been shown by radiocarbon dating to be about 5,150 years old.

The technology of wheels, axles, and wagons drawn by cattle may have been used to build the structures at the Flintbecker Sichel cemetery near Kiel in northern Germany’s moorlands.

According to the archaeologists, they have uncovered the earliest use of this innovation in Europe, which was not present there or in Southwest Asia until the fourth millennium BC.

Archaeologists have long presumed that the first animal-drawn carts originated in the Middle East, where cattle were first domesticated about 10,000 years ago.

The finding, however, suggests that early Europeans may have developed the technology in parallel.

Archaeologist and co-author Johannes Müller of Kiel University said, “It is clear that the people in Central Europe were high-tech just as early as those in the Middle East,” and adding that it “puts Flintbek at the center of one of humanity’s defining innovations.”

There are dozens of megaliths at the Flintbek burial grounds: crude stone grave monuments dating from the Neolithic to the Bronze Age (12,000 BC to 1,200 BC).

Megalith, or ‘great stone’ in Greek, refers to the many structures found in a large swath of Europe and parts of the Middle East, which include sites such as Stonehenge in England, Carnac in France, and Knockiveagh in Ireland.

At the cemetery, seven so-called long barrows or Stone Age megalithic graves were found in addition to 14 other burial mounds.

Using carbon-14 dating, the archaeologists verified that the first burials at the crescent-shaped Flintbek cemetery date to as early as 5,800 BC.

In their earliest form, graves appeared there as long barrows or mounds that were steadily enlarged by Stone Age people through successive additions of so-called dolmens: stone chambers made of at least two upright megaliths capped by a third.

Around 3,000 BC, the style of the chambers changed when stone entrances were added to the chambers, which after that served for centuries as collective burial places, much like modern mausoleums.

Co-author Doris Mischka believes that each family had its own burial place at the site, which she concludes makes Flintbek a ritual centre for the entire region.