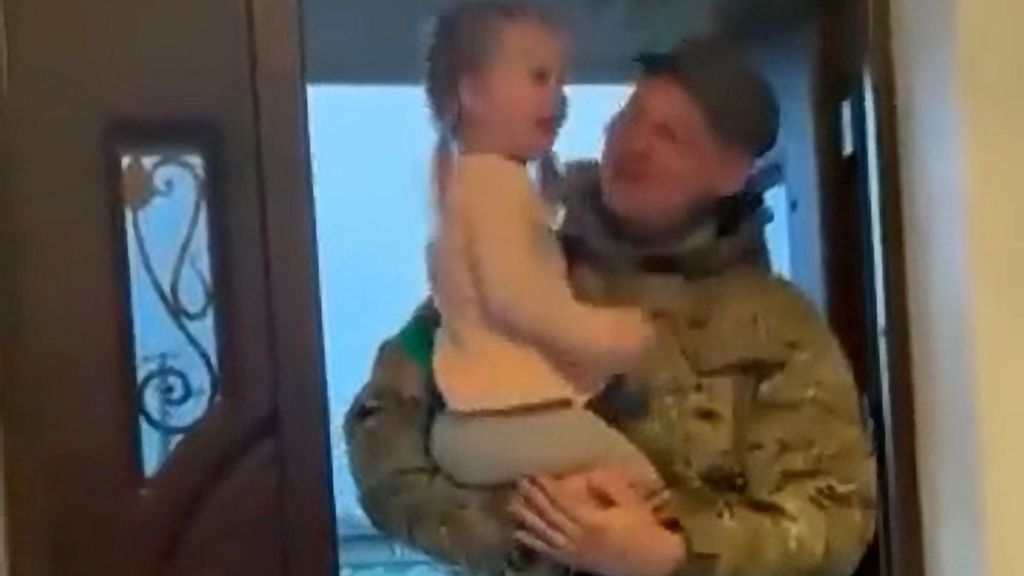 A little girl sees her father, a solder in the Ukrainian Army at home, in April, 2022. (National Guard of Ukraine/Zenger).

A little girl’s adorable homecoming welcome for her war-veteran dad has emerged from Ukrainian military chiefs.

The NGU said: “A girl meets her dad-defender at home.”

The footage shows the excited youngster standing in the doorway of the family home hopping from foot to foot as she waits for her dad to appear.

Then, as she hears his voice, she starts jumping with joy.

And – as he steps into the open doorway – she hurls herself into his arms as he tenderly hoists her into the air while she squeals: “Daddy!”

The dad – not named by officials – is still in his uniform and is carrying a doll for his daughter and what looks like a bag of groceries.

The NGU did not specify where in Ukraine the feel-good moment had been filmed.

The National Guard said in a separate statement: “We wish for all our defenders to return alive and well to their loved ones.

“We are fighting for the most valuable thing: the right to live and love in your home according to your own customs.”

Ukrainian President Volodymyr Zelenskyy said last week that about 2,500 to 3,000 Ukrainian soldiers had been killed over the course of the invasion thus far.

Russia, however, claimed on 25th March that its forces had killed 14,000 Ukrainian troops.

The Office of the UN High Commissioner for Human Rights recorded 5,939 civilian casualties in Ukraine – 2,787 killed and 3,152 injured – in a report yesterday.

Russian troops invaded Ukraine on 24th February in what the Kremlin is now calling a “special military operation” to “protect Donbas”. The invasion is now in its 64th day.

The Donbas region, in eastern Ukraine, is home to a large number of Russian speakers, whom Russian President Vladimir Putin has claimed Kyiv has been carrying out a “genocide” against.

US officials have dismissed these claims as propaganda.

The Donbas region is comprised of Donetsk and Luhansk Oblasts, parts of which have been under pro-Russia separatist occupation since 2014.

The breakaway regions style themselves the Donetsk and Luhansk People’s Republics. They were officially recognized by Russia days before the invasion.

Russia is the only UN member state that recognizes the breakaway regions as independent nations.

The General Staff of the Armed Forces of Ukraine (AFU) reported earlier today that Russia had lost around 22,800 troops over the course of the invasion thus far.

«Previous Post
VIDEO: Ukrainian Mum One Of First To Get A Job In UK»Next Post
Herr It Comes Again: Comeback For New Model Of Nazi Germany Aircraft