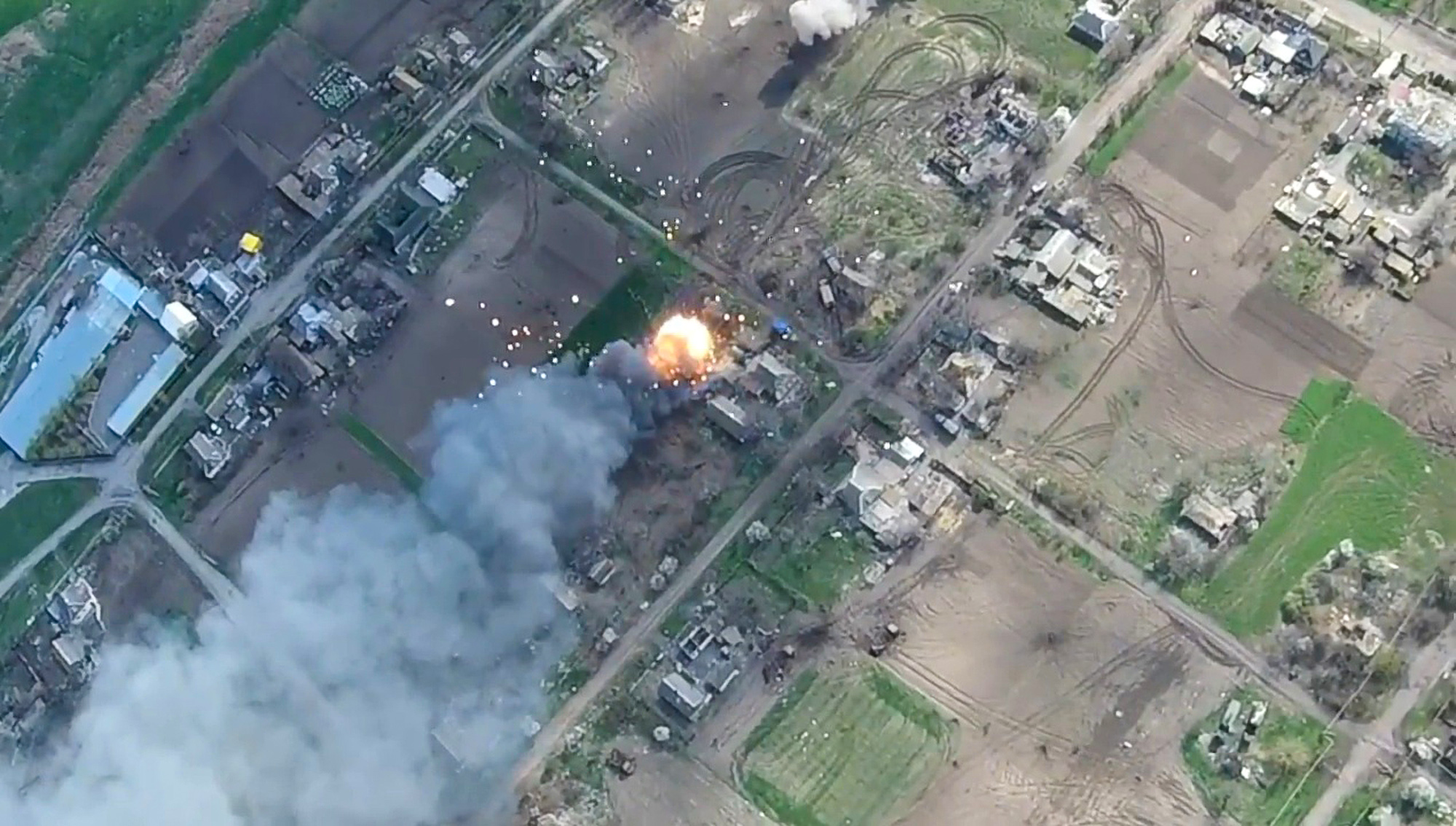 Soldiers of ath 53rd separate mechanized brigade named after Prince Vladimir Monomakh destroyed a stockpile of ammunition of the Russian Army, in Ukraine, in April, 2022. (@53brigade/Zenger)

This is the moment Ukrainian soldiers blew up a Russian ammo depot in a small village. No nearby homes were damaged.

The 53rd Separate Mechanized Brigade, named after Prince Vladimir Monomakh, a brigade of the Ukrainian Ground Forces, said it was a “huge task” to destroy the Russian facility while not damaging surrounding civilian infrastructure.

The Ukrainian brigade stated: “Soldiers of the Separate Mechanized Brigade named after Prince Vladimir Monomakh recently destroyed a stockpile of ammunition of the occupying forces of the Russian Federation.

“The enemy stationed his deadly iron warehouse on one of the entrances to a Ukrainian village.

“It was a huge task to hit the occupier’s stockpiles and not cause serious damage to civilian infrastructure. However, the soldiers of the prince’s brigade managed it.

“The intricate strike instantly blew up the stock they were planning to kill with.

“Enjoy! This is exactly the case when something is terribly beautiful.”

The brigade added: “Believe in our soldiers, believe in the Armed Forces of Ukraine! Let’s win together!”

The drone footage shows multiple explosions at the ammo depot as Ukrainian soldiers apparently shell the building. Massive clouds of dark smoke billow into the air as fire sparks from the strikes. While the attacks on the Russian warehouse are intense and persistent, it can be seen how the coordinated attack did not hit surrounding areas, including homes.

From February 24th to April 29th, the total combat losses of Russian troops stand at around 23,000 personnel, according to the General Staff of the Armed Forces of Ukraine.

Meanwhile, President Putin has reportedly agreed “in principle” to the evacuation of civilians from the Azovstal steel plant in Mariupol, to representatives of the United Nations and the International Committee for the Red Cross.

Russian forces have been heavily attacking the plant for weeks now. A reported 150 employees have already died, while thousands have been unaccounted for. The Azovstal steel plant has produced steel for some of the word’s most significant landmarks, including Hudson Yards in New York City.
Putin made the concession to UN Secretary General Antonio Guterres during a meeting in Moscow.