Some Like It Hot: Get Ready For A Blazing Summer 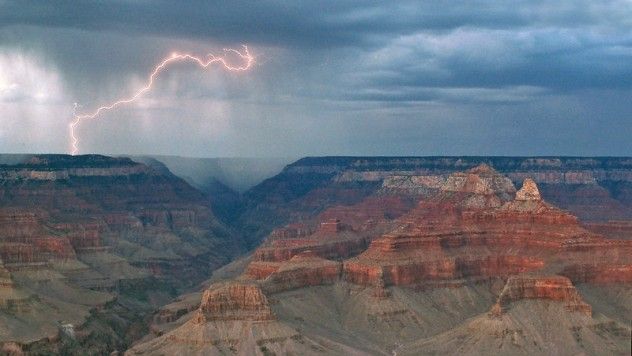 A lightning bolt streaks over the Grand Canyon during a summer thunderstorm. (NPS/Grand Canyon National Park)

The start of summer is fast approaching, and AccuWeather meteorologists have forecast climbing temperatures in the United States.

The first taste of summer arrived months ahead of schedule in Southern California, where temperatures reaching the 80s and 90s F were reported during the first half of February. Residents of the northern Plains, meanwhile, are wondering if winter will ever end, with multiple rounds of Arctic air and blizzard conditions appearing throughout April.

The roller-coaster ride that is spring will continue to blur the lines between the seasons in the coming weeks, but a long-lasting warmth is on its way.

AccuWeather’s senior meteorologist Paul Pastelok has created a forecast for the contiguous United States for the upcoming season.

Meteorological summer is slated to begin on Wednesday, June 1, just two days after the Memorial Day weekend, often touted as the unofficial start of summer. Astronomical summer will commence less than three weeks later on the solstice, which occurs this year at 5:13 a.m. EDT on Tuesday, June 21.

Lawnmowers will have their work cut out for them this summer across the Northeast and Midwest. But finding windows of opportunity to head outside could be tricky, with a storm pattern on tap.

“In the Northeast, we’ve had ample amounts of moisture here to start off 2022,” Pastelok said.

This wet weather pattern is predicted to continue across the country into the summer, with frequent rain disrupting many outdoor summer activities, including yard work.

“We may not have to water the lawn too often,” Pastelok said. “The thing is — you’re going to have to probably cut the lawn often.”

More moisture will also mean increased chances for severe weather from the Atlantic Coast through the Great Lakes.

The Midwest faces the highest risk of severe weather this summer, particularly in June and July. Damaging storms and tornadoes will also be possible across the Northeast throughout the summer, including the heavily populated Interstate 95 corridor.

Pastelok noted the long-term weather pattern this year bears some similarity to 2012, a summer that produced a disastrous derecho across the Ohio Valley and mid-Atlantic.

A derecho is a long-lived complex of thunderstorms that produces destructive wind gusts of at least 58 mph over an area spanning at least 240 miles. Wind gusts often exceed the 58-mph benchmark, and the storm system is sometimes referred to as an “inland hurricane.”

The areas at highest risk of experiencing the impact of a derecho are the Midwest, Ohio Valley and parts of the mid-Atlantic.

Nearly every major city across the Northeast and Midwest experienced more 90-degree days than normal last summer. Boston typically counts 14 of these days throughout the year, but last year, it reported 24. This year, AccuWeather is predicting 15 to 18 of these days for the city.

Last summer in the nation’s capital, the mercury hit 90 F on 48 occasions, above the long-term average of 40 days. A repeat could unfold this summer in Washington, D.C., with 42 to 46 days expected to reach 90 F this year.

Chicago is another city forecast to have more 90-degree days than normal this year, similar to what unfolded in 2021. Last year, the city counted 22 days when the mercury reached 90 F, above the long-term average of 16 days. This year, AccuWeather is predicting the Windy City will experience 18 to 24 days with a temperature of at least 90 F.

Pastelok noted that although daytime temperatures will average near normal in the East this summer, overnight temperatures will be well above normal. This means there will be less natural cooling at night, increasing the energy demand during the overnight hours.

Those planning a trip to a beach along the Atlantic Coast this summer to get some relief from the heat are in luck but not every day will be picture-perfect.

“It’s going to be a decent, but not a great beach summer,” Pastelok said. For people heading to a beach in the mid-Atlantic or the Carolinas this summer for a seven-day vacation, he said there will likely be rain on two or three of those seven days.

One wildcard in the beach forecast is an early-season tropical system, which could have multi-day, far-reaching effects, including rough surf, rip currents, wind and rain.

Last summer, there were four tropical systems that spun up near the U.S. coast between mid-June and mid-July, with Tropical Storm Claudette, Tropical Storm Danny and Hurricane Elsa all making landfall. Tropical Storm Bill was the only one that did not make landfall, but spun up just off the coast of the Carolinas. It was close enough to land to create disruptions on the beaches.

The areas at highest risk for an early-season tropical impact include the central Gulf Coast and most of Florida. But other regions, including North Carolina’s popular Outer Banks, cannot be completely ruled out.

Between 16 and 20 named storms are forecast to develop this year, with multiple U.S. impacts predicted, according to Dan Kottlowski, an AccuWeather hurricane expert.

As thunderstorms frequent the East Coast and Midwest and tropical troubles brew near the Southeast, rain could be hard to come by across the nation’s heartland.

Drought conditions are widespread from Texas through Montana, with most of the High Plains experiencing severe to extreme drought, according to the U.S. Drought Monitor. The worst conditions are focused on the Texas and Oklahoma panhandles and western New Mexico.

“The High Plains is going to end up being drier and drier as we go into the first part of the summer season,” Pastelok said. “So, I don’t see any relief coming that way from any big [thunderstorm] complexes developing.”

The heat and dryness will not only put a strain on crops across the region but will also lead to a higher-than-average cooling demand across the region. Americans living in metro areas of San Antonio, Dallas, Kansas City and Denver can expect substantial home-cooling costs this summer.

“We do think it’s going to be a pretty decent monsoon season,” Pastelok said. He added that it could begin slightly earlier than normal, in late June or early July. The monsoon in the Southwestern typically begins in July and lasts into September.

Rain from the monsoon will help to douse short-term drought concerns across the region, but the monsoon-induced rain will be a double-edged sword.

“Unfortunately, when the monsoon season starts, you can get [the] development of more fires triggered by lightning strikes. Then, you have to deal with the mudslides afterward in the burn area. So, it’s not all good news, but it is good news as far as water goes,” Pastelok said.

The fire season in the Four Corners got underway during the second half of April with multiple blazes breaking out, including the Tunnel Fire near Flagstaff, Arizona, and the Calf Canyon Fire near Santa Fe, New Mexico.

Thunderstorms associated with the monsoon could disrupt outdoor plans all across the interior West during what is expected to be the busiest summer travel season since before the coronavirus pandemic.

Millions of people are set to visit national parks, from the Grand Canyon in Arizona to Zion and Arches in Utah and eastward into Rocky Mountain National Park in Colorado. All will be subject to rounds of turbulent weather during the monsoon season.

The start of this summer will differ from last year for part of the West Coast, but the overall theme of the season will be the same, according to AccuWeather’s long-range forecasters.

Last June featured all-time record heat across the Pacific Northwest and into Canada, melting away longstanding temperature records in dozens of cities. Portland, Oregon, set a new all-time high temperature three days in a row during the peak of last summer’s intense heat wave, with the mercury topping out at 116 F.

This June will be almost the exact opposite, with temperatures more typical of early summer and even some brief shots of rain and some high-elevation snow. Temperatures throughout the month are predicted to be 6-8 degrees F lower than those seen in June 2021, from Seattle down to the south and east through Salt Lake City.

The summer heat will make quick work of California’s snow pack, a vital resource for filling water reservoirs during the dry season. Mountain snow across California was well below normal this past winter, so there will not be as much snow melt feeding already-depleted reservoirs.

Pastelok said water restrictions and limited hydroelectric power is anticipated across the region following the dry winter months, especially with the limited snow pack across the region’s mountains.

However, rain from the monsoon will be far short of ending the long-term drought being experienced across the interior Southwest. Earlier this year, the water level in Arizona’s Glen Canyon Dam, one of the most critical water reservoirs in the western United States, dropped to its lowest level since the dam’s creation in the 1960s. If the water level continues to drop, hydroelectric power generators at the reservoir could be affected.

“We had some greening taking place in December in Northern California and then again here, late in the season. That’s bad news. When that dries out, that’s going to set more fuel to the fires out there as we get later in the season,” Pastelok said.

Wildfire season in Southern California could ramp up in June before the threat becomes more widespread across the western United States throughout July and into August.