If Atlantic hurricane-naming sequence reaches “I,” the name will be “Ian.”
By Adriana Navarro April 29, 2022
Facebook
Twitter
Linkedin
Email 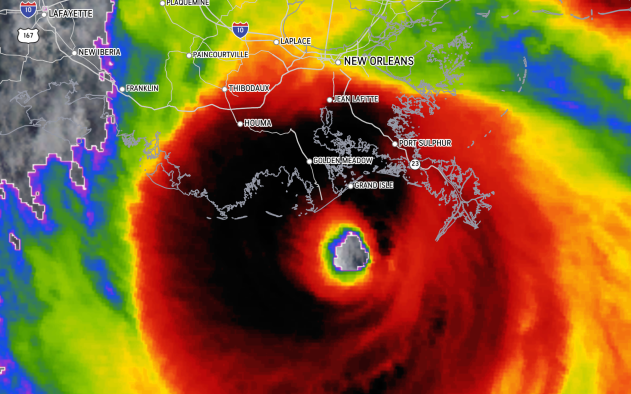 AccuWeather's RealVue™ Satellite image shows Hurricane Ida's eye as it was nearing landfall late in the morning of Aug. 29, 2021. (Courtesy of AccuWeather)

Ida will join the ranks of retired storm names after the Category 4 hurricane claimed dozens of lives and caused widespread destruction across the United States in late August 2021, even when weakening into a tropical rainstorm.

The World Meteorological Organization (WMO) Hurricane Committee maintains a rotating list of names that are used in each tropical cyclone basin. It will remove a name in the case of a particularly deadly or costly storm. Hurricane Ida met the criteria twofold.

With a catastrophic path that carved hundreds of miles from Louisiana through New Jersey, Hurricane Ida caucused 91 deaths, the U.S. Centers for Disease Control and Prevention found.  The hurricane has been ranked the fifth-costliest storm on record at $76.5 billion, according to the National Oceanic and Atmospheric Administration’s National Centers for Environmental Information and the National Hurricane Center. AccuWeather Founder and CEO Dr. Joel N. Myers had estimated in late August of 2021 that the total damage and economic loss from the hurricane would fall between $70 billion and $80 billion. After the storm caused catastrophic damage in the Northeast, he revised his estimate to $95 billion.

Ida is the 94th retired storm name and the 12th “I” name to be retired since 1954, further cementing it as the most-retired letter. Only “C”- and “F”-named storms come close to challenging the number of retired I-named storms, both tied at nine, according to data compiled by Brian McNoldy, a senior research associate at the University of Miami’s Rosenstiel School of Marine and Atmospheric Science.

Hurricane Ida made landfall near Port Fourchon, La., on Aug. 29, 2021, as a Category 4 storm, with maximum sustained wind speeds of 150 mph, about 40 miles west of where Hurricane Katrina made its first landfall. While the levee systems held up, communities outside of the levee system were hit by the full force of the hurricane’s storm surge, and more than 10 inches of rain fell in parts of Louisiana and Mississippi within the first 48 hours of landfall.

More than 1 million customers across Louisiana were without electricity the day following landfall. Power was almost entirely restored by Sept. 10, but storm-caused outages in less-populated areas persisted for more than a month, according to radio station WWNO.

To add to the weather misery, a heat advisory was issued for parts of Louisiana and Mississippi in the days following the storm, with RealFeel® Temperatures hovering at or around 100 degrees Fahrenheit on Aug. 31 in New Orleans and Houma, La.

About 17 of the 91 deaths (18.7%) attributed to Ida were generator- or power outage-related, the CDC found.

Overall, 28 people were killed in Louisiana due to the storm, with another two deaths each in Mississippi and Alabama. But the threat to life that Ida posed didn’t end in the South.

Ida claimed at least 59 lives in the Northeast. At least 52 of them were due to drowning,

While Ida had long been downgraded into a tropical rainstorm by the time it reached the Northeast, it had fed on the contrast between warm, humid air south and east of the storm’s center coupled with cooler air to its northwest, AccuWeather Senior Meteorologist Bob Larson explained in September 2021.

The resulting deluge prompted the issuance of the first flash-flood emergency to include New York City.

More than 1,000 miles from where it had made landfall, Ida dumped 3.15 inches of rain within 60 minutes over New York’s Central Park, shattering the previous one-hour rainfall record set two weeks prior by Tropical Storm Henri. Many of the deaths that were reported in New York and New Jersey were those of people who were unable to escape the basement or first-floor apartments where they lived.

AccuWeather forecasters are predicting another overly active hurricane season for the Atlantic basin in 2022, noting a high chance for a preseason storm to develop. Similar to the 2021 Atlantic season, AccuWeather is predicting the basin could generate 16 to 20 named storms, with six to eight hurricanes, three to five of which could develop into major hurricanes (Category 3 or higher).

If the basin reaches the letter “I,” the storm will be named Ian.

Ida had delivered more than five inches of rainfall across at least 14 states, 10 of which had sites that recorded over 7 inches of rainfall from the storm, according to AccuWeather Senior Weather Editor Jesse Ferrell, citing the National Weather Service rainfall map.

AccuWeather meteorologists rated Ida a 4 on the RealImpact™ Scale for Hurricanes, which is used to highlight the threat of dangerous flooding and destruction along the storm’s path.