Cold Comfort: Neanderthals Chilled Out In Summer By Heading North 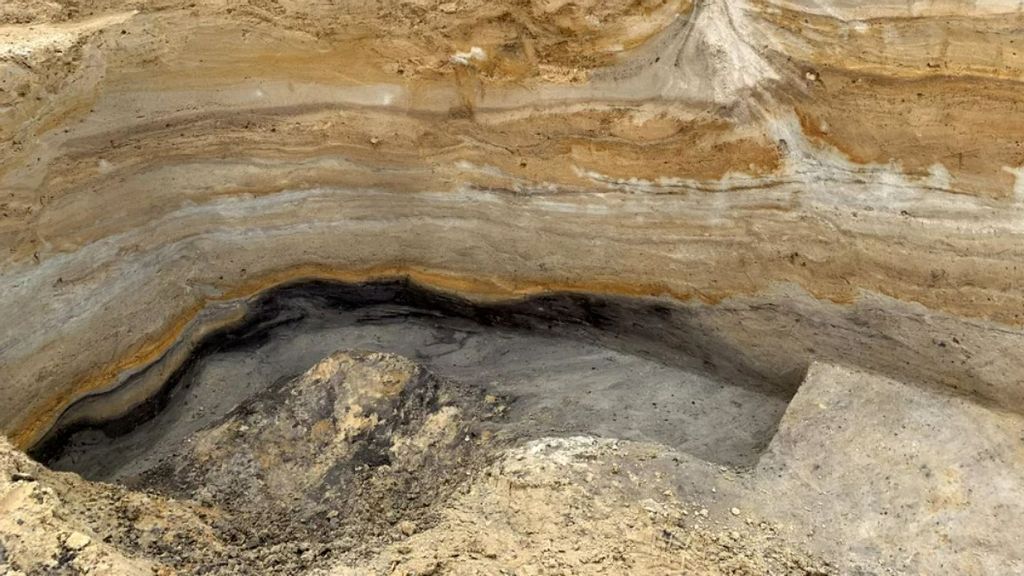 Lake shore (black organic layer) from 90,000 years ago superimposed by cold climatic sediments according to the Max Planck Institute for Evolutionary Anthropology in the German city of Leipzig. (M. Weiss, M. Hein/Zenger)

Man’s Neanderthal ancestors used to escape warm summers to chill out in the icy climates of northern territories , a new study has revealed.

Scientists have discovered that Neanderthals showed remarkable flexibility to environmental changes around them and would travel to where they were most comfortable.

The team investigated whether Neanderthals were well adapted to life in the cold or preferred more temperate environmental conditions.

Based on examinations in Lichtenberg in the Wendland region in Lower Saxony, the scientists determined that during the last Ice Age, Neanderthals visited their northernmost settlement areas even during cold phases.

However, they preferably went there in the summer.

Using an integrative research approach, the researchers from the different German science institutions have combined analytical methods from archaeology, sedimentology and micromorphology with the study of pollen to explore in detail the relationship between human presence in the north and changing environmental conditions.

The Max Planck Institute explained it was vital to focus on Neanderthal sites on the northern periphery of their range since this was where various environmental developments had been most noticeable, especially as a result of repeated ice advances from Scandinavia.

A region particularly suitable for such investigations is northern Germany, with its numerous documented Neanderthal sites.

Michael Hein, a geographer at the Max Planck Institute’s Department of Human Evolution in Leipzig, said: “Archaeological excavations are a window into environmental history.

“Based on sediments and pollen grains they contain, we can reconstruct the vegetation and environmental conditions of the time.

“For this, the most accurate dating possible is required, which – in the case of Central Europe – is still lacking for many climatic phases of the last Ice Age.

“In Lichtenberg, we have now succeeded in dating quite accurately the end of a pronounced warm phase – the so-called Broerup Interstadial – to 90,000 years.

“Thus, the cooling of the continent would have coincided with the climate change in the Greenland ice and the North Atlantic. A direct coupling had so far only been suspected – but not proven – for northern Germany.”

The study also found that Neanderthals occupied a lightly wooded lakeshore about 90,000 years ago in a relatively temperate climate. Stone tools found at the former campsite attest to a variety of activities, such as woodworking and plant processing.

In the excavations, the layers of this former campsite are located above the lakeshore campsite, which is associated with a temperate climate period, and date to a time about 70,000 years ago, when the last Ice Age’s first cold maximum began. The researchers were thus able to prove that Neanderthals had indeed inhabited the northern regions even during cold phases.

Marcel Weiss, an archaeologist at the University Erlangen-Nuremberg, said: “Changes in stone tools indicate that Neanderthals adapted in line with changing environmental conditions.”

He added: “In Lichtenberg, we were able to show that they repeatedly visited northern Central Europe – which developed from a heavily forested environment during the last warm period, to sparser forests of a cold-moderate climate period at the beginning of the last Ice Age, to the cold tundra of the first cold maximum.”

In this context, the stone tools, especially knives made of flint, show that the Neanderthals’ lakeshore site may have served a hunting party for a short stay.

Evidence from other sites from the same time period indicates that during cold phases Neanderthals likely visited their northern dwelling grounds mainly during the summer months.

Neanderthals are an extinct group of humans and the closest evolutionary relatives of humans living today.

The oldest known Neanderthals are about 400,000 years old. They became extinct around 40,000 years ago. Neanderthals lived in Europe and in the Middle East as well as in western Siberia and Central Asia.

Their name comes from the site where workers in a limestone quarry discovered parts of a skull and bones in 1856 – the Neandertal near Duesseldorf, the capital of the German State of North-Rhine Westphalia. ‘Tal’ means valley in German.

Although the skull was as large as that of a human being living today, it also showed clear differences.

Compared to present-day humans, the Neanderthals had more pronounced eyebrow bulges and a fleeing forehead. Neanderthals also had a chinless face with peculiar nasal cavities, which made it easier to warm up cold air when inhaling.

The cause of their extinction remains highly contested. Demographic factors like small population size, inbreeding, and random fluctuations are considered likely factors.