The ring-tailed lemur is a large strepsirrhine primate and the most recognized lemur due to its long, black and white ringed tail.
By Thomas Hochwarter April 28, 2022
Facebook
Twitter
Linkedin
Email 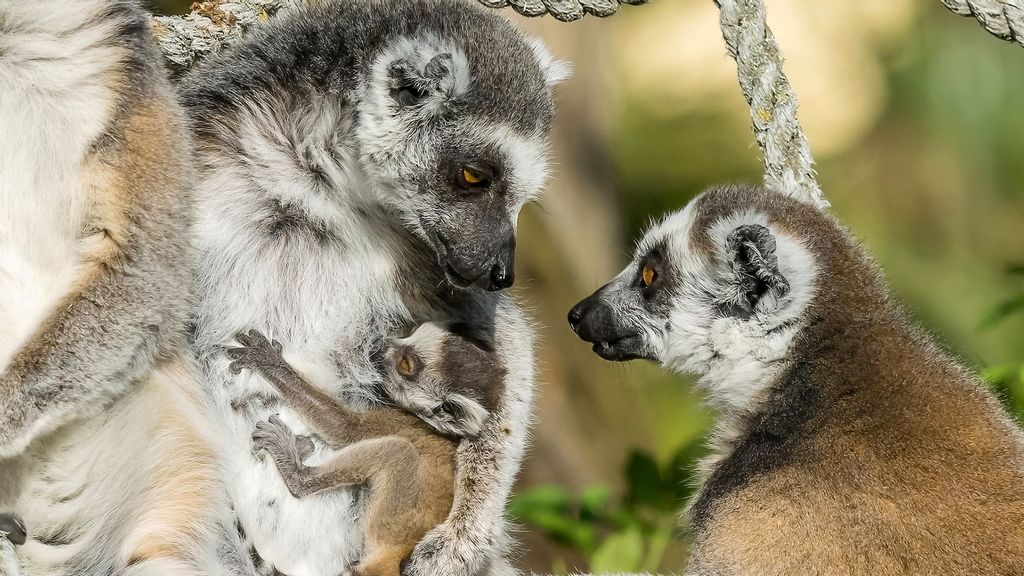 Ring-tailed lemurs with their young at the Vienna Zoo in Austria. (Daniel Zupanc/Zenger)

This two-week-old baby ring-tailed lemur tried to get to grips with its new life as a zoo celebrity.

But as it faced the limelight for the first time at Austria’s Tiergarten Schoenbrunn zoo in Vienna, all it really wanted to hold onto was its mum.

Expert keeper Nicolas Carbon explained: “The mother animal is being supported by the other seven female members of our group of ring-tailed lemurs.

“The males don’t engage in raising the kids.

“Lemurs are matriarchal societies. It’s the female animals who are the decision-makers.”

The ring-tailed lemur (Lemur catta) is a large strepsirrhine primate and the most recognized lemur due to its long, black and white ringed tail.

It belongs to Lemuridae, one of five lemur families, and is the only member of the Lemur genus.

Like all lemurs, it is endemic to the island of Madagascar and is endangered.

It is omnivorous and the most terrestrial of extant lemurs. The animal is diurnal, being active exclusively in daylight hours.

Despite reproducing readily in captivity and being the most populous lemur in zoos worldwide, numbering more than 2,000 individuals, the ring-tailed lemur is listed as endangered by the International Union for Conservation of Nature’s (IUCN) Red List due to habitat destruction and hunting for bushmeat and the exotic pet trade.

The IUCN is an international organization working in the field of nature conservation and sustainable use of natural resources headquartered in Gland, a municipality in the Swiss canton of Vaud.

Their population in the wild is believed to have declined by 25 percent within the past 25 years to around 2,000 individuals in 2017.

Habitat loss, poaching and hunting are the main reasons for this development.

Tiergarten Schoenbrunn was established by the royal Austrian-Hungarian Habsburg Family in the magnificent park of Schoenbrunn Palace in the Hietzing district, in western Vienna, back in 1752.

Today the institution is the world’s oldest zoo still in operation.

The zoo has been registering over two million visitors every year since 2006.