‘Tornado Alley’ May Be Shifting East

There has been a directional change in tornadoes. While the Great Plains is routinely hit, so are other parts of the U.S.
By Allison Finch April 28, 2022
Facebook
Twitter
Linkedin
Email 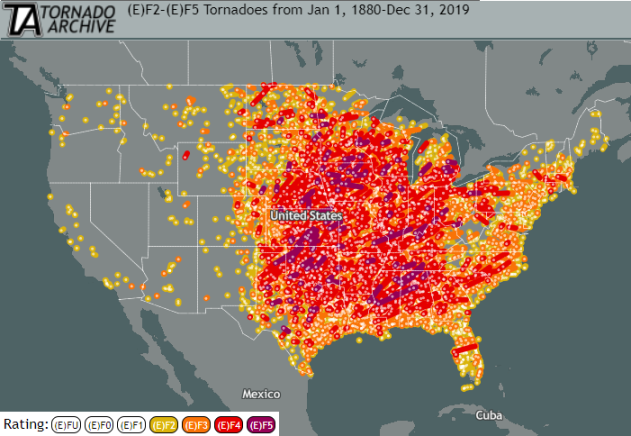 The graphic looks at significant (EF2+) tornado tracks from 1880-2019. (TornadoArchive.com)

Tornado Alley may have a new address.

On average, 1,200 tornadoes hit the United States each year, according to the Storm Prediction Center (SPC). While twisters can happen at any time and in any state, the prevailing wisdom held that most occur in Tornado Alley, an expansive area within the central U.S. designated by meteorologists in the mid-20th century.

That definition may be taking an eastern tilt.

Since then, the term has stuck as a way to describe the area that encompasses parts of Texas, Oklahoma, Kansas, Nebraska and South Dakota, where it was believed tornadoes were the most frequent.

With powerful tornadoes decimating areas in the Midwest and the southeastern U.S. over the past 20 years, there now may be a reason to believe Tornado Alley has shifted east.

“When you look at the trends in where tornadoes have occurred in recent years, it’s very clear there have been more tornadoes farther south and farther east away from what people have typically known as the Tornado Alley across the Plains,” Jonathan Porter, AccuWeather chief meteorologist, said.

A study conducted in 2018 and published in the journal Nature showed that the ingredients required to produce long-lived twisters were flourishing more in the Mississippi River valley in the last 20 years than parts of the original Tornado Alley.

Further, the number of days with meteorological conditions conducive to tornadoes has declined for parts of the original Tornado Alley, while the number of tornado days has increased significantly east of the Mississippi River, the study said.

“I believe it’s physically real that we’ve seen this increase in the mid-South region in the last 40 years,” said Dr. Harold Brooks, the senior research scientist at the National Oceanic and Atmospheric Administration (NOAA).

In February 2022, another research paper concluded that large tornado outbreaks have shifted geographically when considering the years from 1989 to 2019 vs. 1950 to 1980. “Spatial analysis of [large tornado outbreaks] reveals that their nucleus has been shifting to the Southeast during the recent 31 years compared to the earlier records,” according to the study.”

AccuWeather’s analysis of this, and other research, shows the area of the most common tornado occurrence, i.e. Tornado Alley, has moved from the Plains to the Southeast and parts of the lower Mississippi River Valley over the last few decades. This shift is illustrated best when comparing the 35-year period of 1985-2019 to 1950-1984.

Paul Pastelok, AccuWeather lead long-range meteorologist, attributed tornadoes becoming more frequent to the east of Tornado Alley to the lack of moisture in the original Tornado Alley, which can be traced back to the 20-year mega–drought gripping much of the Southwest.

“You’re going to see higher pressure aloft over the Southwest, and that will bring drier air into the Plains and force the storm track and the worst of the tornadoes to develop farther east into the Mississippi and Tennessee Valley,” Pastelok said. “You’re going to need to break that drought to get more consistent action going on in Tornado Alley.”

Along with the decreased amount of moisture across the Great Plains, Porter said the warmer water in the Gulf of Mexico has increased the moisture in the atmosphere in the Mississippi and Tennessee River valleys.

“That’s been a contributing factor as to why we’re seeing a higher frequency of tornadoes farther east,” Porter said.

Defining Tornado Alley over a longer period of time is not universally agreed on by all meteorologists. AccuWeather asked Brooks where he thought the most tornadoes occurred, and he pointed to his research paper from 2000 showing how many “tornado days per century” Earth might experience.

“What you see, whatever time period you look at, is sort of an L-shaped feature that goes through the Plains and pivots … into the Southeast.” The highest concentration of tornadoes, he said shifts around in each 15-year period (see animation below), moving from Arkansas to Oklahoma, and back to Mississippi. But the overall coverage of tornadoes stays the same, and always has.

In the longer term, where exactly Tornado Alley actually exists is up to meteorologists’ interpretation.

“There are a lot of different ways to slice and dice the data,” Jesse Ferrell, AccuWeather meteorologist and senior weather editor, says. “I think it’s fair to replace the ‘Ye Olde Tornado Alley’ map with the combined areas shown on AccuWeather’s ‘Shift in Tornado Alley’ map, which covers the entire period of record of consistent data, and is the most up to date. People just need to realize that tornadoes can occur outside these areas. And although the area has shifted in the last 35 years from the Plains to the Southeast, it may shift again.”

Where did that “Ye Olde Tornado Alley: map, as Ferrell calls it, originate? The map is still carried in the SPC’s Tornado FAQ today, but the scientific data is a bit of a red herring in the discussion of where tornadoes occur.

Brooks says he never thought the map in question was an accurate description of where the most tornadoes occur, but rather an area to show where tornado season is consistent from year to year, something that only happens in the Plains with the spring tornado season. Outside that area, tornadoes can occur at different times of the year.

“People will [take] the [original Tornado Alley map] and then compare it to a figure which is the just occurrence [of tornadoes] and say that it’s shifted — when they are really comparing two different things,” Brooks said in an interview with AccuWeather. “There are new data that we could add to [the original Tornado Alley map] and if we added to it, it wouldn’t substantially change the figure at all.”

Although there might not be meteorological consensus on a more modern definition of Tornado Alley, storm chasers have noticed a shift in the pattern. They have had to change their game plans for pursuing twisters in recent years, and some fear this might be a permanent change.

Chimera Comstock, who has been chasing storms for almost 20 years, told AccuWeather the shift in Tornado Alley has made storm chasing more challenging and more dangerous.

Unlike the flat, open landscape and gridded road network in the Plains, forests and limited road options make storm chasing extremely difficult for Comstock and other chasers. She explained that instead of chasing the storm, she must now get into position ahead of the storm and hope the storm passes her location, potentially putting her or other chasers in immediate danger.

“In [the South], you really need to know and understand storms and how to read radar and have a somewhat working knowledge of the area to be able to be safe when you’re chasing these twisters,” Comstock said.

Brooks also noted the difficulty of collecting and communicating information on twisters in parts of the Southeast.

“There are a large fraction of tornadoes that occur after dark, with the addition of more trees, visibility is a lot worse, which makes collecting information about the tornadoes harder,” Brooks said.

Brooks also said families and residents of the Southeast are more vulnerable to tornadoes because there is a higher level of poverty and more people living in manufactured homes.

One thing almost everyone can agree on is that it will be important to define the region where the most tornadoes occur to keep people informed and safe. Having a higher amount of people living in the Southeast, compared to parts of the Plains, means that more people are now adversely affected by these violent storms.

“Rural population densities in Alabama are more than 10 people per [square kilometer]. In western Oklahoma, western Kansas, it’s less than 1/10 of a person per [square kilometer]. So you can put a tornado over western Oklahoma for a considerable distance and basically hit nothing or very little. You cannot do that in the mid-South and Southeast. Any tornado on the ground for more than a few miles will hit structures,” Brooks said.

Understanding that tornadoes can strike anywhere, at any time is crucial. Porter said it is essential to have a plan in place in case a tornado strikes — no matter where you live.

“It’s important to understand about the tornado hazard. There is a risk anywhere in the U.S., and you have to have a simple plan about what you and your family or your business is going to go if you’re immediately threatened by a tornado,” Porter said. “Sometimes, you only have a matter of a couple of minutes to react, so I always tell people a bit of planning goes a long way. Have a conversation with your family about where is the safest part of our house.”