A KKL-JNF delegation met with the Guatemalan president to discuss water management and development in desert areas of his country.
By Abigail Klein Leichman April 28, 2022
Facebook
Twitter
Linkedin
Email 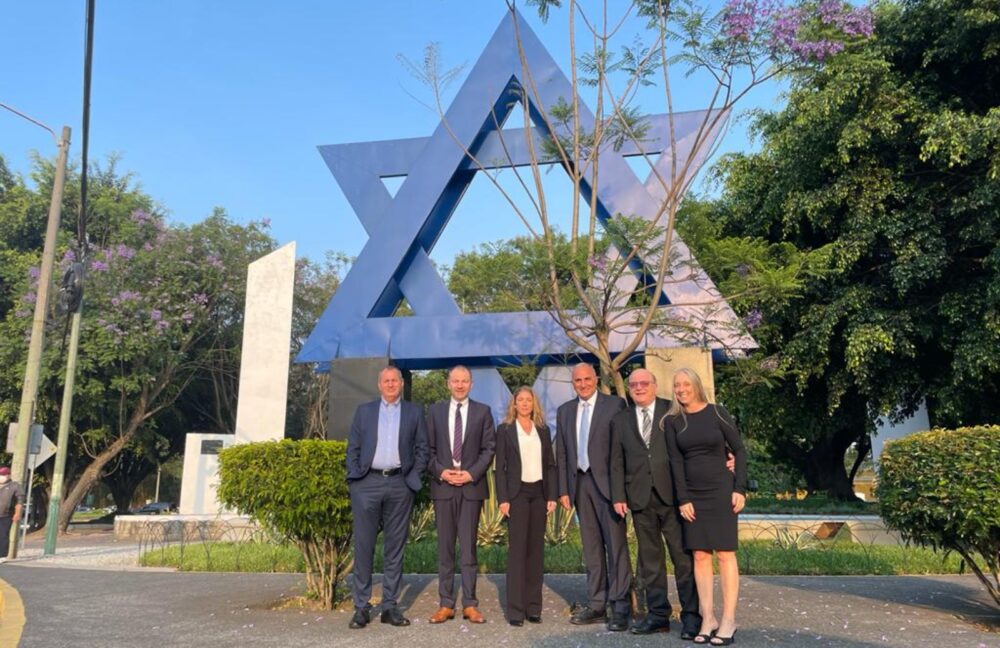 A KKL-JNF delegation is seen visiting Israel Square in Guatemala City in March 2022. The Israeli team had come to the Central American country to discuss helping with the water crisis and ways to deal with climate change. (Courtesy of KKL-JNF)

Israel’s Keren Kayemeth-Jewish National Fund (KKL-JNF), billed as the world’s oldest “green” organization, may put its expertise to use in lands where contaminated water is a pressing present-day problem and is called “agua contaminada.”

A delegation from Jerusalem-based KKL-JNF, headed by CEO Amnon Ben Ami, flew to Guatemala in late March to discuss with President Alejandro Giammattei and Foreign Minister Mario Bukaro the possibility of using the firm’s expertise and technology to deal with Guatemala’s “Dry Corridor” and ongoing water crisis.

“Guatemala’s wealth of natural resources includes abundant water from streams and lakes that provide water supply coverage to 94 percent of the country. However, surface water is unevenly distributed, seasonal and often polluted, and only 61 percent of the water supply comes from a safely managed source,” the U.S. Agency for International Development says.

“Improving the management of water resources in Guatemala is made even more difficult because of the lack of a national-level water management policy or law,” the agency added in a statement on its website.

Its findings seemingly reiterate the reason for KKL-JNF’s interest in Guatemala.

“Our visit in Guatemala was very successful, and we hope to sign a mutual memorandum of understanding in the near future. We look forward to hosting the Guatemalan delegation in Israel,” said Ronnie Vinnikov, head of KKL-JNF’s Resource Development and External Affairs Division.

During the same trip, the KKL-JNF delegation held a congress in Mexico to update hundreds of officials from Latin America, Spain and Portugal on the company’s goals for the near future and on the prospects of working together to deal with the challenges posed by global warming.

“It’s a great privilege for KKL-JNF to share its broad knowledge it has accumulated over the years regarding management of water and agriculture in arid areas,” Vinnikov said.

KKL-JNF says it has been working since 1901 to advance water management, forestry and environmental education and technology in Israel.

According to the Water Engineers for The Americas organization: “785 million people around the globe lack access to basic water services. Contaminated water and poor sanitation increase the risk of diseases that can result in death such as cholera, diarrhea, dysentery, hepatitis A, typhoid and polio.”

In Guatemala, the organization echoes other groups in saying “water has become an important issue as the country has experienced below-average levels of rainfall due to drought conditions.”

Posted in association with ISRAEL21c.