Lucie Smith, 21, has been living alongside sickening mold and damp in her social housing accommodation in St John's.
By Anamarija Brnjarchevska April 28, 2022
Facebook
Twitter
Linkedin
Email 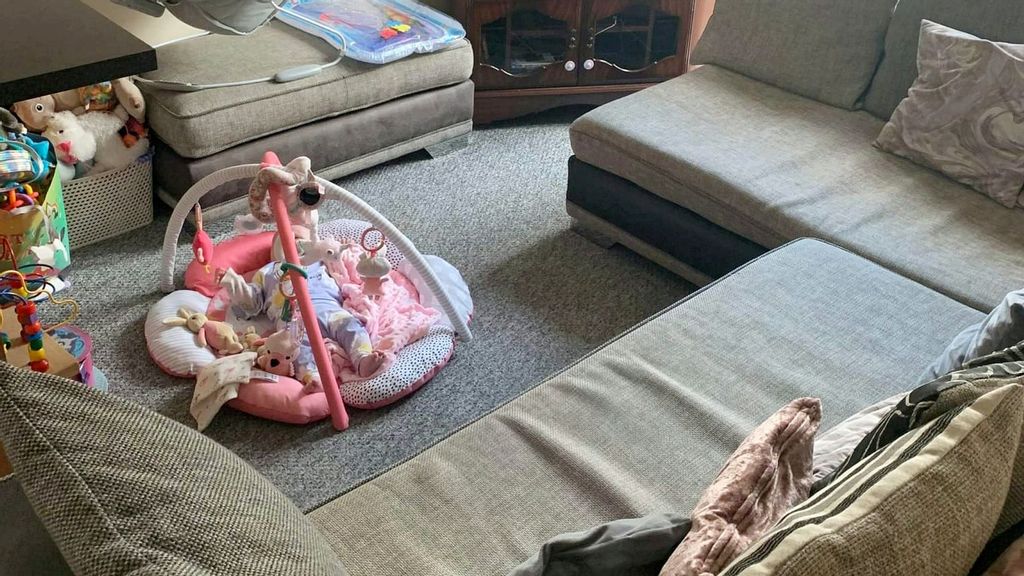 A desperate mum says she and her young daughters are suffering from constant illness after being forced to live in a disgusting mould-ridden flat for the last six months. (Steve Chatterley/Zenger)

A desperate mum says she and her young daughters are suffering from constant illness after being forced to live in a disgusting mould-ridden flat for the last six months.

Lucie Smith, 21, has been living alongside sickening mold and damp in her social housing accommodation in St John’s, Worcester since October last year.

She claims her two children, Isla Grace, three, and five-month-old Willow Rose have been left with multiple chest infections and coughs as a result of the issue.

Lucie and her daughter all suffer from asthma and now also want a bigger flat as they are forced to sleep in three beds crammed into one room inside the property.

She began begging housing providers Platform Housing for help resolving the problem last year and even reported the matter to Environmental Health.

But Lucie says she was told to keep the windows open in her flat to fight the mold despite it being winter until the property was eventually visited two weeks ago.

Lucie, a chef at Wetherspoons, who has lived at the flat since 2019, said: “Mine and my children’s physical health is failing due to Platform Housing’s mistakes.

“My daughters and I have three beds in one room of this tiny flat, and all suffer from asthma.

“The mould has caused multiple chest infections for us all as well as general chesty coughs.

“We originally shared this with Platform back in October but the issue was only acknowledged in January as I was told they had no record of me lodging the complaint.

“The mould growth became so bad that we had to report it to Environmental Health.

“When somebody eventually came they scraped away the mold and Platform later provided a sum of compensation for the delay.

“The compensation was not what I was reporting this for, it is myself and my children’s health that has suffered due to the situation.

“I have been trying to get out of this property now for the last three years.”

Lucie claims she was told in January the issue would take no more than six weeks to be rectified but it was 16 weeks before anyone attended the property.

Somebody eventually came out to scrape off the mold, which has since grown back to back forcing Lucie to try and clean it herself despite having asthma.

Lucie’s partner Carl Thomas, 33, who lives in Evesham, Worcs., added: “The children are on antibiotics, the baby has a really chesty cough at the minute.

“When they eventually came out, all they did scrape the walls and put on some mould sealant, they didn’t let Lucie leave or open any windows.

“It’s disgusting. Lucie has had to clean it three or four times herself, and she’s asthmatic. They told her to scrape it. It’s a family home and she pays the rent for it.

“The home is no longer suitable either due to the size of the property. The three-year-old has cut her head on the breakfast bar in the middle numerous times.

“It got to that bad they had to sleep in the front room. The three of them were coughing in the night.

“They’ve had bites here too. They were like little black and white mites on the mould. It’s grim and in no state for a family to live in.

“They told us to keep the windows open to fight the mould but it was winter and freezing cold. We didn’t even have working heating.

“It took 16 weeks to just send someone out to scrape the mould, with everyone in the flat and then left the window dirty. It’s not acceptable.”

Mould and dampness are caused by excess moisture, which can be caused by leaking pipes, rising damp, or rain seeping in because of roof or window damage.

According to the NHS, mold produces allergens, irritants, and, sometimes, toxic substances.

Inhaling or touching mold spores may cause an allergic reaction, such as sneezing, a runny nose, red eyes, skin rash, and asthma attacks.

Marion Duffy, chief operations officer at Platform said: “We are really sorry to hear about this situation for our customer.

“Looking after the health and wellbeing of our customers is paramount.

“One of our operatives has visited our customer at her home and has arranged with them for the works required to be carried out.”