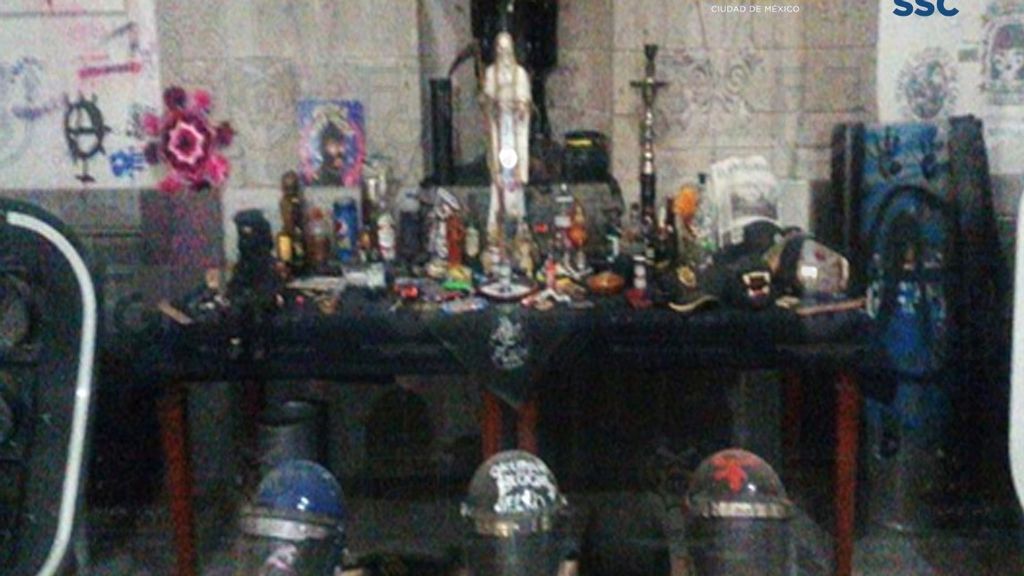 Altar to Santa Muerte found during the recovery of a property in Mexico City, Mexico. (@FiscaliaCDMX/Zenger)

Astonished police discovered a hoard of explosives and drugs at a shrine to a Goddess of Death occupied by a group of militant feminists.

Three suspects at the lair – inside a former National Human Rights Commission in Mexico City – were arrested on April 15 on assault and narcotics charges.

Inside the building – occupied by the group for two years – police found a grim statue of ‘Santa Muerte -= Spanish for Saint Death piled with tributes of Molotov cocktails, stolen police helmets, and sacks full of cannabis.

Santa Muerte is a cult with pre-Hispanic Mexican origins with a following among narcotraffickers and other criminals, as well as corrupt police.

One of the images of the Death Goddess was festooned with a green bandanna, a symbol frequently worn by feminists and other pro-abortion advocates in Latin America.

Three women were arrested in the operation, accused of a violent attack on an elderly woman who had been driving through the city, as well as drug trafficking.

In a statement on Twitter, Ana López Reyes (a.k.a. Nnux) denounced the attack against her 72-year-old mother, writing that as a feminist, she is “furious and saddened that these things are done in the name of feminism.”

The video showed that four women wearing balaclavas came out of the occupied building on April 14 and blocked traffic on the street outside and demanded money.

When the elderly woman tried to drive past, she was attacked and threatened by the gang members, who smashed the windows of the vehicle.

López Reyes tweeted, “I have long been confused about these radical groups. I understand the anger; I understand painting the names of victims [of femicide] throughout the city.

“But this? Closing streets and attacking a woman because she won’t give you money?”

Dr. Robert J. Bunker, director of research and analysis at C/O Futures, said in an interview, “Santa Muerte is an amoral and non-judgmental deity that is accepting of marginalized groups and communities,” including the poor, criminals, and marginalized groups such as feminists, lesbians, drug-users, and homosexuals.

Anarcho-feminists, for example, he said, gravitate to Santa Muerte as a “saint of last resort” because traditional Christianity promotes morality and offers little solace to these women.

In local video news coverage of the raid, Bunker said police helmets on the altar may represent the leftist feminists’ petitions for protection from the police or curses upon them.

Bunker, who has long chronicled leftist insurgencies and crime in Latin America, has written in the past that criminal behaviour associated with Santa Muerte has been judged by many as an evil value system that rewards personal gain and promotes torture and murder as pleasurable activities.

In a paper he drafted for the FBI, he wrote that “enough ritualistic behaviours, including killings, have occurred in Mexico to leave open the possibility that a spiritual insurgency component of the narcotics wars now exists.”

Santa Muerte and similar cults have grown in Mexico, Bunker said, and in recent years spread into Central America and the United States.

Roman Catholic authorities have denounced the cult, saying that Santa Muerte is utterly opposed to Christian principles and beliefs.

A Catholic priest, Hugo Valdemar Romero, for example, recorded a YouTube video in 2019 as he publicly burned effigies of Santa Muerte.

The Mexican Army is also opposed to the cult, having destroyed numerous worship centres in 2010 and arrested Romo Guillen – a leader of the cult – on kidnapping charges.

In 2009, Guillen had called for a “holy war” on the Catholic Church, according to Bunker.

Bunker has pointed out in the past that some adherents of the cult cannot separate violent acts from the worship of Santa Muerte.

For example, in 2004, a powerful criminal figure confessed to murdering babies and virgins as offerings to Santa Muerte in exchange for her protection and favour.

And in Nuevo Laredo, just across the U.S./Mexico border in 2008, rival narcoterrorists seized members of the Sinaloa Cartel and executed them at public Santa Muerte shrines, perhaps as sacrificial victims.

In the interview, Bunker pointed out that Mexico is a “low political capacity state” where factional divisions are as constant as its war on narcoterrorist cartels.

Bunker said that police are more likely than the military to harbour Santa Muerte believers because their job’s “inter-relationship with death” tempts them to appeal to the goddess for “magical protection from harm.”

However, he expressed the hope that penetration by Santa Muerte in the police and military is low, especially in elite and heavily-screened units.

Bunker said, finally, that there may be hundreds of thousands of Santa Muerte believers in the U.S., which has public temples in Los Angeles, New Orleans, and New York.