In the footage, a missile is seen exploding near the church in a Ukrainian village.
By Lee Bullen April 27, 2022
Facebook
Twitter
Linkedin
Email 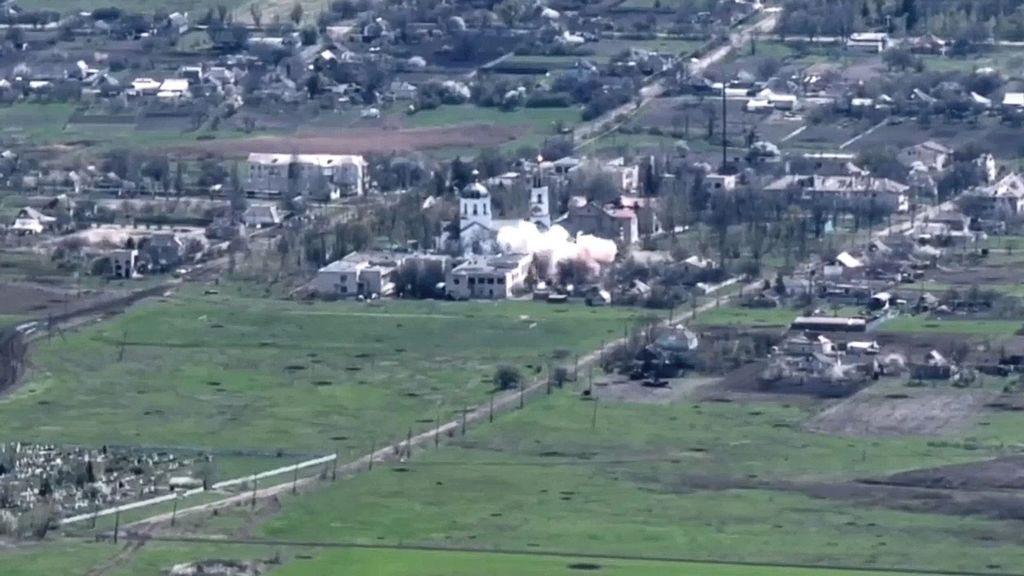 This is the moment a Ukrainian brigade bombs a Russian base set up near a church.

The 53rd Separate Mechanized Brigade, named after Prince Vladimir Monomakh, a brigade of the Ukrainian Ground Forces, stated “all the hoarded equipment was turned into a pile of scrap metal”.

The brigade said in a statement on 25th April: “Soldiers of the separate mechanized brigade named after Prince Vladimir Monomakh continue to demonstrate a high level of skill in the destruction of equipment of the armed forces of the Russian Federation.

“Cynicism and insidiousness are inherent in the occupiers, so the equipment was located near a church.

“As a result of accurate strikes by our artillery, all the hoarded equipment was turned into a pile of scrap metal.

“Russian occupiers, wherever you hide, we will find you.

“Believe in our soldiers, believe in the Armed Forces of Ukraine! Let’s win together!”

In the footage, a missile is seen exploding near the church in a Ukrainian village.

Another missile explodes a few feet away outside a building in front of the church before another blast rocks the street and smoke fills the air.

Russia invaded Ukraine on 24th February in what the Kremlin called a “special military operation”. Today marks the 62nd day of the invasion.

From 24th February to 25th April, the total combat losses of Russian troops stand at 21,900 personnel, according to the General Staff of the Armed Forces of Ukraine.