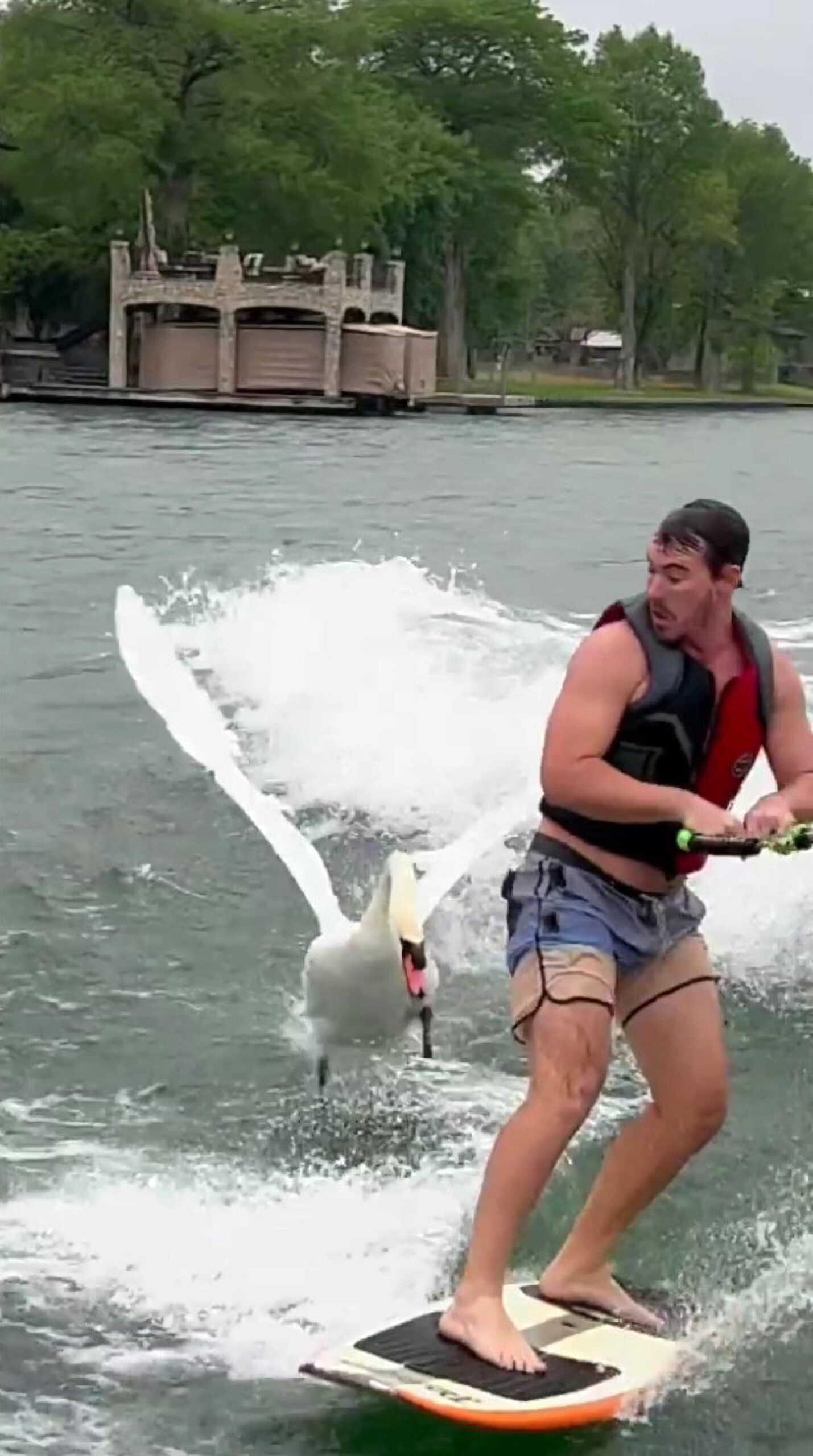 The swan knocks down the man who goes on a wakeboard 1.5 miles south east of Penny Backer bridge in Lake Austin, Texas. (@orrrick/Zenger)

A hapless wake surfer got sent pecking when an angry swan attacked him as he raced across a lake.

Astonished Sean Conway was being towed by a speedboat across Lake Austin, Texas, when the furious bird came at him from behind.

The bizarre incident was shared on Instagram by Sean Conway with the message: “So this happened!”

In the footage, the swan is seen flying across the water surface towards the unsuspecting boarder before pecking at his ankle and nudging the board.

The wake surfer then tumbles into the water as the bird hovers over him for a moment.

“My buddies Chris and Rick invited me to wake surf in the morning, it was only my fifth-time wake surfing.”

Sean said he had only just started surfing when his friends were stunned to see the swan flying about 150 yards from the bank to attack him, comparing the experience to a “helicopter landing right behind me”.

He also conceded defeat to the angry bird and said Mother Nature was just giving him a reminder to take care of the planet.

Sean told Zenger News: “I had just gotten up on the board and was riding for 15 seconds when my friends’ eyes got really big and they became frazzled like I’d already taken a hard fall but I’m still on the board, so what’s up?

“Then this breeze hits me from behind like a helicopter is landing right behind me.

“They told me the bird was near the shore and flew 150 yards before reaching me, that’s how they had enough time to pull out the camera.

“I had been curious if swans actually fly as they are massive and pterodactyl-like. Now I know the answer is certainly yes.

“After crashing, I jumped in the boat. The swan won, and I’m okay with it.

“I think it’s a positive that Mother Nature gives us a healthy poke to remind us we need to preserve this planet.”

Although swans are generally not aggressive, the male swan has been known to attack people when it’s paired with a female and defending a nest.

The males, which are known as cobs, will defend both their nest and their young, with occasionally more serious injuries such as broken bones caused to humans by their powerful wings.

«Previous Post
A 6ft Tall NHS Paramedic Beat Anxiety About Her Height By Bidding To Become Miss England»Next Post
Pensioner With No Car Spends £4,000 To Fix Holes In Road