Kiko, 11, was used as a 'breeding machine' to earn its previous owners around £140,000, her rescuers said.
By Anamarija Brnjarchevska April 27, 2022
Facebook
Twitter
Linkedin
Email 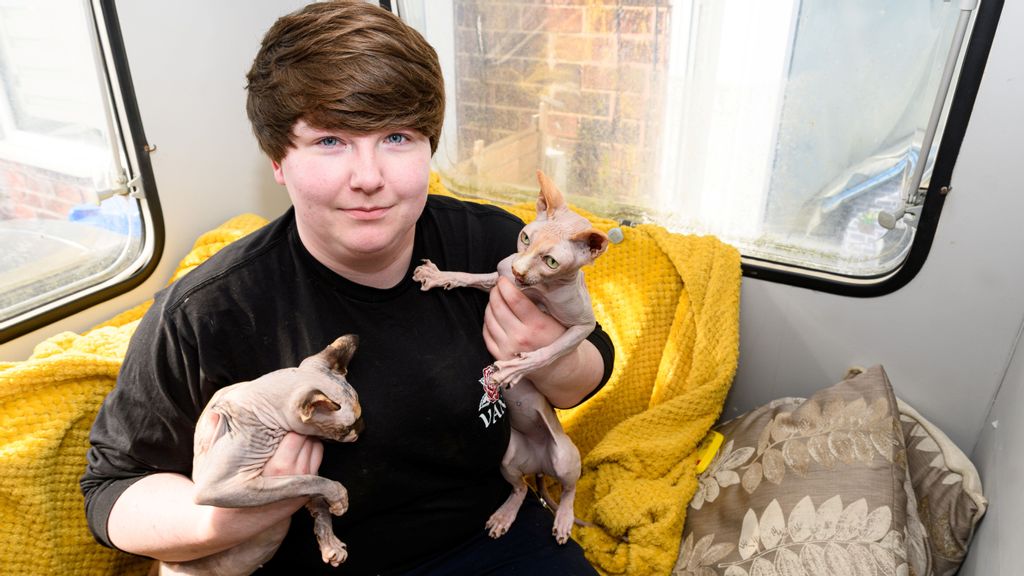 A hairless Sphynx cat has been rescued by a sanctuary after it was almost bred to death by being forced to give birth to around 70 kittens. (JP Blackpool Gazette/Zenger)

A hairless Sphynx cat has been rescued by a sanctuary after it was almost bred to death by being forced to give birth to around 70 kittens.

The poorly moggy was relentlessly bred to produce more than 70 kittens that were sold for up to £2,000 each.

Kiko and her nine-year-old son Nim arrived at Fylde Coast Cats in Blackpool, Lancs., last month, in a terrible condition and looking ‘grubby and dirty’.

They were suffering from feline calicivirus, a highly contagious virus that causes breathing problems and oral disease.

As a result of the constant breeding, Kiko has been left with a pouch so big the skin folds over her back feet.

And Nim was found with bloody gums, and had to undergo a full tooth extraction.

They’ve both also got early kidney disease, which is quite common in sphynxes and indicative of bad breeding and have racked up vets bills of almost £2,000.

Fylde Coast Cats founder Kim Millard said: “His gums were open and bleeding, and he’s got a massive pit in his tongue from ulceration.

“Obviously the breeder has used and abused them. Nim in particular is in a bad way. He’s extremely thin and can’t really eat because of the pain in his mouth.

“They’re desperate for attention all the time. They’ve obviously not had a very nice life.

“She’s got a great big pouch, and when she sits down the skin folds over her back feet.

Because of their poor health, and other problems with the sphynx breed including heart disease and skin infections, Kim fears she will struggle to rehome the cats.

But she remains hopeful that an experienced owner will be able to provide them with palliative care for the little time they have left.

Kim added: “These cats have been bred for money. They haven’t been screened for heart or kidney issues.

“If you’ve got a sphynx, chances are it will die of a heart condition or kidney failure.

“I’ve had a couple of sphynxes of my own, so I have experience with them.

“The problem is that people take them on without doing proper research.

“You have to bathe them. They’ve got very sensitive skin, they get cold very easily, they can’t go out, they get sunburned very easily.

“People think they’re interesting things and go out and buy them – it’s a bit of a fad – but they’re hard work. They’re like the French bulldogs of the cat world.”