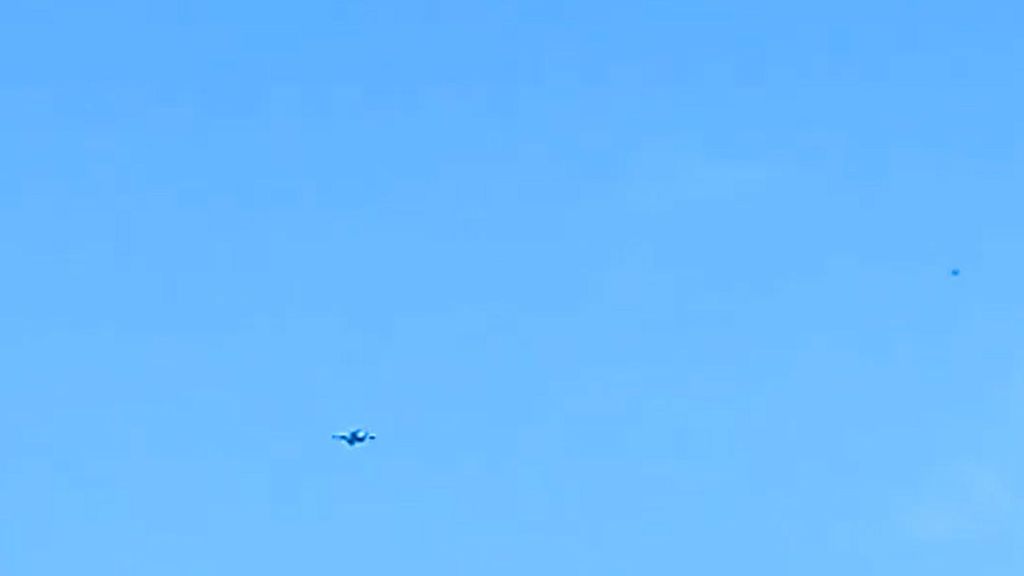 Russian Su-34 fighter-bomber spinning and falling after reportedly being shot by Ukrainian forces in the Kharkiv Oblast in Ukraine. (@spravdi/Zenger)

This remarkable footage appears to show a Russian plane spinning in circles as it descends from the sky after it was struck by a Ukrainian missile.

Stratcom said: “Ukrainian defenders shot down an enemy plane in the Kharkiv region.

“According to preliminary data, it was an all-weather two-seater fighter-bomber Su-34, according to the Air Command East.”

The Air Command East appeared to confirm the strike through its official channels.

According to reports, the warplane was shot down near the city of Balakliya, which is currently under Russian occupation.

It first flew in 1990 and it entered service with the Russian Air Force in 2014.

It is currently operated only by the Russian Air Force, although the Algerian Air Force is reported to have 14 aircraft – in its export version – on order.

It was not reported if the pilots ejected safely.

Russian troops invaded Ukraine on 24th February in what the Kremlin is calling a “special military operation” to “demilitarise and denazify” the country. The invasion is now in its 61st day.

The General Staff of the Armed Forces of Ukraine (AFU) reported earlier today that Russia had lost about 21,900 military personnel over the course of the invasion thus far.

The reports come as five railway stations have come under attack in central and western Ukraine, with reports of casualties, according to officials.

This is despite the Kremlin apparently scaling back its war goals to focus on “liberating” Ukraine’s eastern Donbas region, as announced exactly one month ago.

In the meantime, Moscow has said it will suspend attacks on the Azovstal steel plant in the besieged south-eastern port city of Mariupol to allow civilians to leave.