VIDEO: Coming Up Trunks: Elephant Superstud Shows Off His Strength 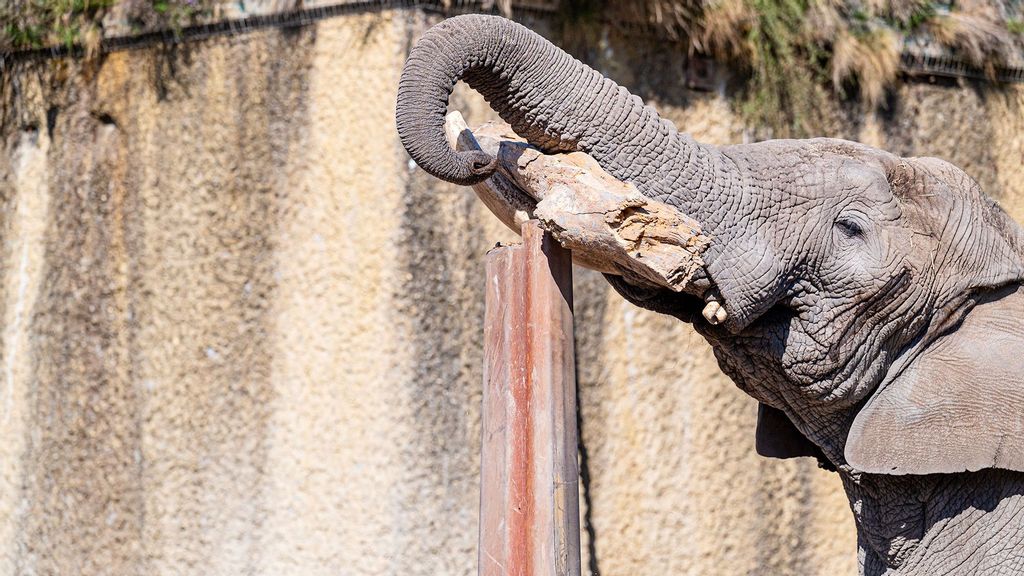 A superstud bull elephant is amazing zoo fans with his astonishing feats of strength and skill.

But it is not for his fatherhood powers but for his baffling skills in balancing huge tree trunks in his enclosure that he is becoming famous.

In videos of his feats, Tusker can be seen delicately manipulating a giant log with his trunk as if it were a toothpick.

Then he carefully hoists it into the air and places it carefully on top of a wooded pole, balancing it so it does not fall back to the ground.

As a bull elephant, he plays a very important role and is responsible for increasing the birth rate of the European zoo population.

African elephant numbers in European zoos are low, and, say his keepers, and it is therefore important to create a breeding programme.

Tusker was responsible for a baby boom at his previous zoos.

At the German Zoo Wuppertal he fathered 13 calves from four different mothers.

In 2019, Tusker then moved to the Netherlands to Rhenen. There, too, he fulfilled his duty impeccably and he is now considered one of the most successful breeding bulls in Europe.

As to the motivation for the stunts, she said: “We think of our animals as wild animals and don’t want to start analyzing them psychologically.

“We believe however that for Tusker, it is a game and an occupation.”

Now keepers in Basel hope that Tusker will go down just as well with his future mates before his next move which is set to be a trip to Spain. They did not say when he would be packing his trunk to head south but did say that it was likely to be soon.

Aged just 30, Tusker is in his prime, as African elephants usually live up to 70 years.

For the visitors of the zoo, the elephant is now the new star.

Corinne Moser’s added: “I received a video from one of the zoo employees in which the visitors clapped for Tusker.”

«Previous Post
VIDEO: Got The Hump: Tourist Terror As Boat Launches Into The Air After Striking Humpback Whale»Next Post
VIDEO: Koala Care: Young Joey Cuddles Up To Her Mum