Howzat: Britain’s Longest-Serving Cricket Umpire Return To The Crease For His 71st Season

At 86, sprightly Keith Dibb is believed to be the oldest umpire in the country.
By Anamarija Brnjarchevska April 26, 2022
Facebook
Twitter
Linkedin
Email 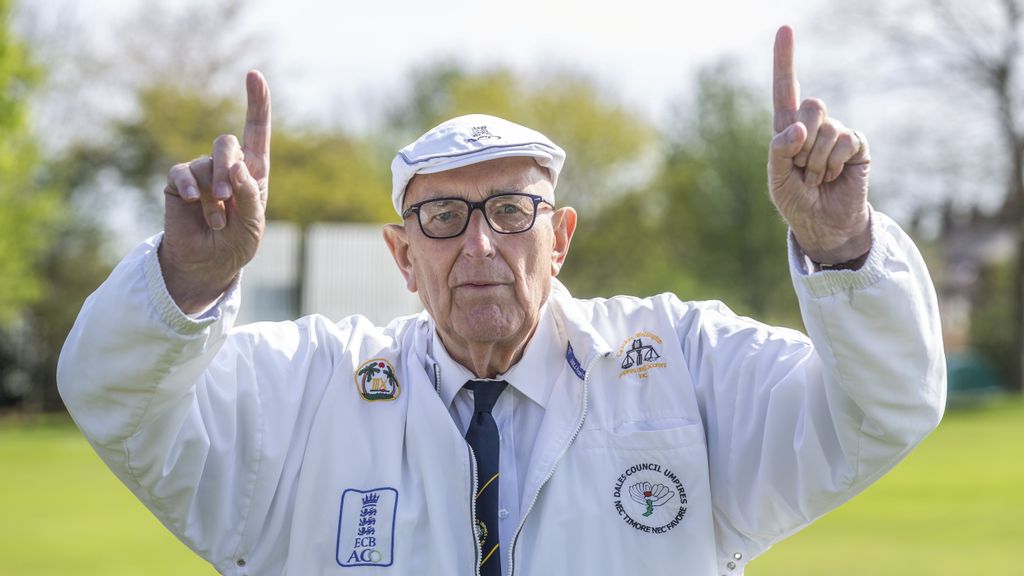 Britain’s longest-serving cricket umpire has returned to the crease for his 71st season – and has no plans to hang up his coat despite spending up to six hours at the stumps. (Lee Mclean/Zenger)

Britain’s longest-serving cricket umpire has returned to the crease for his 71st season – and has no plans to hang up his coat despite spending up to six hours at the stumps.

At 86, sprightly Keith Dibb is believed to be the oldest umpire in the country and has taken charge of around 1,000 matches over the course of his lifetime.

The former medium bowler first caught the cricket bug at 13 when he joined a local team in North Yorkshire where he grew up.

Because he was 11th in the batting order, he began officiating matches he played way back in 1952 and had not missed a season of cricket since.

Since he finished playing at the age of 47, he took up the role full-time and is still going strong despite his age.

Keith takes his white umpires coat everywhere he goes and has even overseen matches in New Zealand and Barbados when he was supposed to be on holiday.

Not even two shoulder operations and a knee replacement have stopped him spending up to six hours at a time at the crease every weekend.

Last year he won the umpires’ award for the Dales Council League – where he has stood at the crease in matches since 1995 – having previously collected it in 2000 and 2003.

And on Saturday, he officiated his first match of the season between Rodley third team and Baildon’s fourth XI.

The grandfather-of-four, of Leeds, West Yorks., said: “The way I see it, I’m giving young players some enjoyment.

“And if I see any senior players I’m always pushing them to join umpiring when they’ve finished.

“It’s the friendship and comradeship that I enjoy the most. I went to three games last week to see how they were getting on and people there remembered me.

“Some people ask ‘are you still doing it?’. It’s the love of the game that keeps you going.”

Cricket has been a constant in Keith and his family’s life.

His beloved wife of 59 years Margaret used to make the teas at Hawksworth Cricket Club, where he was a founding member.

He added: “When my son was born, my wife said ‘don’t get him into cricket’. But he followed me around when I played and was always playing with a plastic bat.

“My daughter always played cricket. Her mother was making the teas and her father and brother played together. She didn’t want to be left out so she eventually joined a ladies’ team.”

And since Margaret tragically died of Covid in December 2020, Cricket has been his main outlet for company.

He added: “Last season umpiring was tiring but you need company, and cricket has provided that.”

His daughter Wendy emigrated to New Zealand and Keith went over to visit in 2008 and ended up umpiring four matches – including a title decider in the Wellington League.

During the trip, Keith visited the New Zealand Cricket Museum in Wellington in his white umpires coat.

A local umpire invited him along to a meeting where it was mentioned they were short of an umpire that weekend.

Keith said: “The next Friday night they rang up and said can you help us again on Saturday? I ended up doing four weeks with them!”

One Christmas, Keith and Margaret went to Barbados for some winter sun and he planned on watching an over 50s tournament being held in the country.

But two weeks before he flew, the tour organizers called him to say one of the teams didn’t have an umpire and asked if he’d step in.

He was on the field to call the final four of the tournament at the legendary Kensington Oval.

Keith umpired at the Retford Gala in Nottinghamshire for 20 years, where legendary umpire Dickie Bird would present the prizes.

As he was traveling back to Yorkshire, Keith would drop Dickie off on his way home and the pair struck up a friendship.

Keith worked for the Dickie Bird Foundation – a charity set up to help underprivileged children through sport – for 13 years and is still a fundraiser for the cause.

It was through that friendship that Keith was able to umpire a charity game that Dickie had organized at Yorkshire Cricket’s Headingley home ground.

Earlier in his career, Keith had umpired a Yorkshire County Cricket game and both memories rank among his career highlights.

He said: “The dream when I was 13 was to play for Yorkshire. I wasn’t good enough, but I umpired Yorkshire and I’m happy to have done that.

“And to umpire at Headingley, as a Yorkshireman, was amazing. It’s the mecca of cricket, it was such an honor.”

Standing at 6’4, Keith cuts an imposing figure at the crease and in his younger days, players would think the former textiles salesman was a police officer.

He said: “Of course, I wasn’t, but I never corrected them. I thought let them think that, they’ll not answer me back that way.

“I’ve had a few instances where teams have tried to cheat, but I always called it out. I was firm but fair.

“You get the odd comment as players like to take part in sledging. When I was in New Zealand, an Australian bowler said with my coat I’d look better in a butcher’s shop.

“He followed through down the wicket on one delivery and he apologized, but I said to him: ‘If you do that again, I’ll have blood on my coat’.”