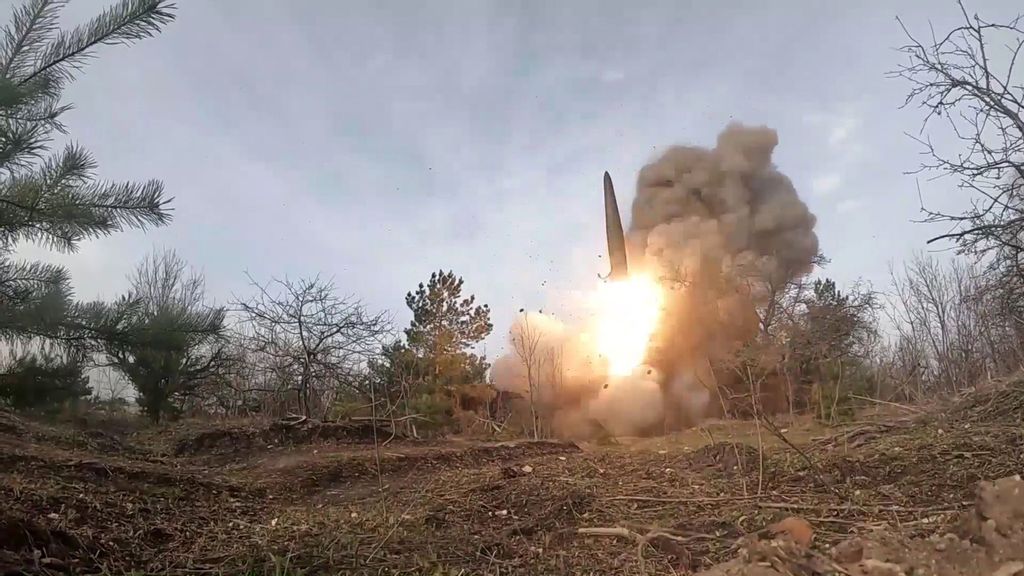 Russian Army launched an Iskander missile attack on a warehouses with weapons and ammunition of the Armed Forces of Ukraine, in April, 2022, in Ukraine.  (Russian Defense Ministry/Zenger)

A Russian rocket launcher camouflaged in fir tree branches put on an amazing show of firepower in footage released by the Kremlin.

Tree branches and leaves would make the mobile weapons system appear from the air like a giant fallen tree.

In a statement obtained by Zenger News, the Russian MoD said on April 25th that a unit with a 9K720 Iskander mobile ballistic missile system “launched a missile attack on warehouses with weapons and ammunition of the Armed Forces of Ukraine (AFU)”.

The Russian military added: “In the course of the special military operation, the Armed Forces of the Russian Federation continue to strike at the military infrastructure of the Ukrainian Armed Forces with precision-guided missiles.

“Intelligence troops discovered warehouses with weapons, military equipment, and ammunition of the Armed Forces of Ukraine in the hangars.

“It was established that all this equipment was intended for subsequent delivery to the units of the Armed Forces of Ukraine in battle formations.

“After the information was confirmed by the technical means of reconnaissance, the warehouses were attacked by an Iskander operational-tactical missile system (OTRK).”

The Russian MoD said the missile system was positioned in a field, camouflaged and loaded with a ballistic missile, adding: “Servicemen calculated the target’s position and fired.

“Then they left the firing position at top speed and took up new ones to carry out launches on the next targets.”

Russia invaded Ukraine on 24th February in what the Kremlin called a “special military operation”. Today marks the 61st day of the invasion.

From February 24th to April 24th, the total combat losses of Russian troops stand at 21,900 personnel, according to the General Staff of the Armed Forces of Ukraine.