Blushing bride - Denise Alexis, 27, from Singapore - shared the video on TikTok where it has been viewed 300,000 times.
By Feza Uzay April 25, 2022
Facebook
Twitter
Linkedin
Email 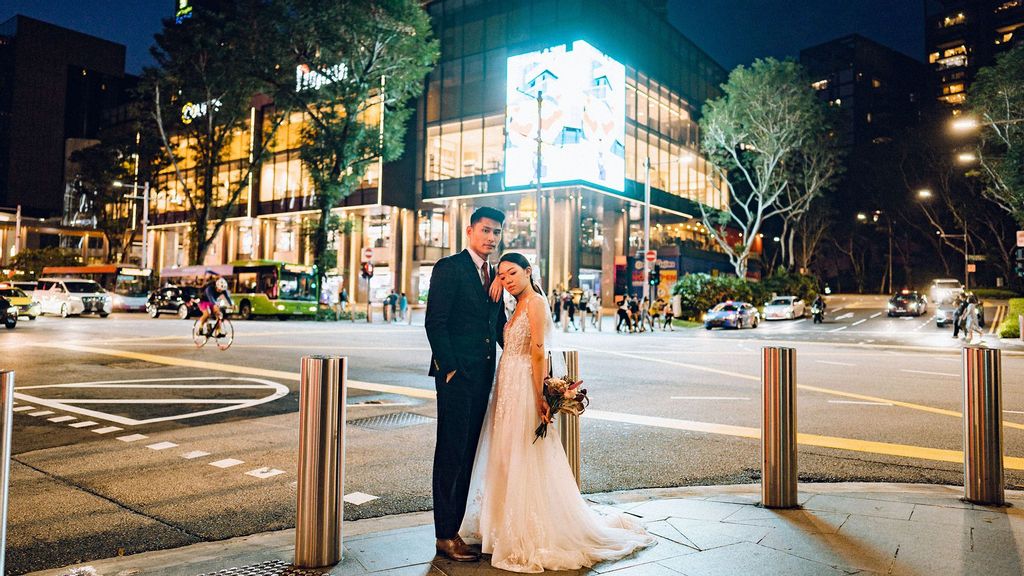 Wedding pictures of a couple in Singapore who did an acrobatic cheerleader pose during a wedding photoshoot along Orchard Road on 27th February 2022. (@heystranger.photography, @denisealexis/Zenger)

A cheerleading couple stunned passersby when they carried out a gravity-defying acrobatic stunt in their wedding outfits on a pedestrian crossing.

Blushing bride – Denise Alexis, 27, from Singapore – shared the video on TikTok where it has been viewed 300,000 times.

She explained: “We did a crazy photoshoot along Orchard Road, how did you think it went?”

Despite hitting the headlines in the couple’s homeland last week, Denise told Zenger News that the sensational single-handed hoist was filmed on 27th February.

In the footage, Denise and her groom are seen preparing for the stunt on the street as a stylist adds the finishing touches to the bride’s makeup.

The couple then walks into the middle of Orchard Road – Singapore’s busiest street – and get into position for their acrobatics.

As the groom hoists his cheerleader bride into the air with one arm, she holds a bouquet of flowers above her head and smiles for the camera.

Then the groom lowers his wife to the ground as a helper runs over and lowers her onto the tarmac before the group quickly gets out of the street.

Denise, a marketing manager, and content creator, told Zenger that she and her partner have been cheerleaders “for about 10 years now”.

She explained: “We have actually been doing yearly stunt photos on the road for a while now, usually during Chinese New Year, so it’s sort of like a tradition we do with each other.

“When the photographer suggested trying it, we were super down to do it.

“Also this stunt is a simple stunt that most cheerleaders would do when taking cheer photos.

“I expected the video to gain more views than usual, but I did not expect it to go that viral and have so much news coverage on it.

“We are glad that most reactions were happy for us and that it was mainly positive reactions, we expected some negative ones, especially from those who don’t understand the sport or didn’t understand that we planned everything carefully, such as choosing a pedestrian crossing that was one of the longest timing (1 min 30 seconds).

“We are also happy that our images are bringing attention to cheerleading as a sport in Singapore.”

«Previous Post
Guinness Announces Death Of World’s Oldest Person, 119»Next Post
VIDEO: Boy Aged Three That Has A Real Farm To Play With, And Even Drives A Real Tractor