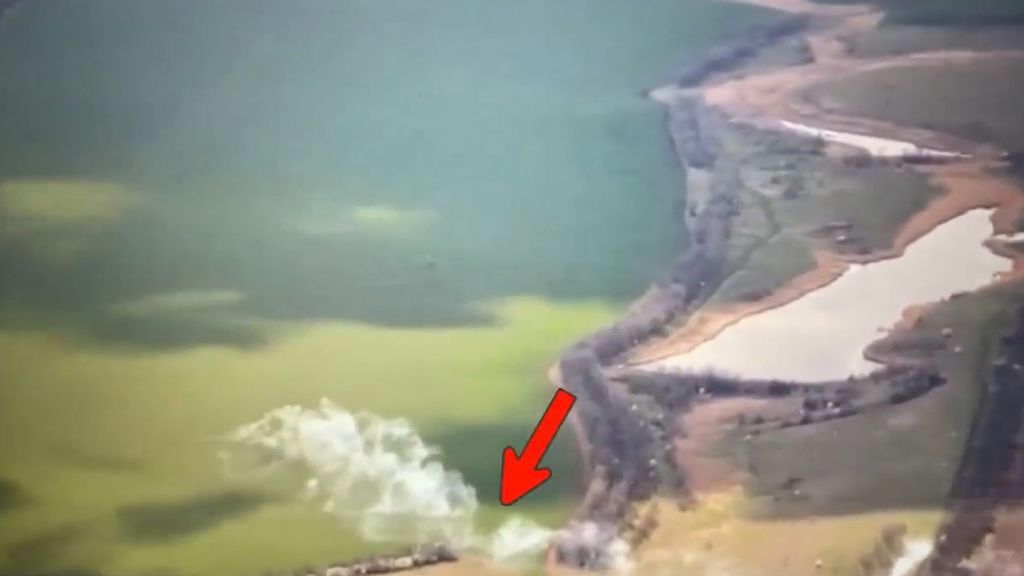 Ukrainian paratroopers shot down a Russian helicopter with a Stinger in April 2022. (@DefenceU/Zenger)

This video shows a Ukrainian missile whizzing towards a Russian helicopter and blowing it to smithereens in mid-air.

Zenger News obtained the footage from the Ministry of Defense (MoD) of Ukraine yesterday (Thursday, April 21).

The MoD said (in English): “Military brotherhood. On April 21st, Ukrainian paratroopers shot down a Russian helicopter with a Stinger. And when the second helicopter arrived, it was shot down by Marines. Ukrainian Armed Forces are strong, both on the ground and in the air.”

Zenger News also obtained a statement from the General Staff of the Armed Forces of Ukraine (AFU) reading (in Ukrainian): “Marines together with fellow paratroopers destroyed two Russian Mi-8 transport and combat helicopters.

“On April 21, in one of the areas of execution of tasks, the air defense unit of a separate airmobile brigade of the DShV [Ukrainian Air Assault Forces] of the Armed Forces of Ukraine destroyed a Russian Mi-8 transport and combat helicopter with a Stinger MANPADS [man-portable air-defense system].

“The video shows the place of the fall of the occupiers’ helicopter with a red arrow.

“Subsequently, another Russian helicopter, trying to evacuate a possibly surviving crew, was successfully destroyed by servicemen of one of the Marine units of the Ukrainian Navy.

“Death to the Russian occupiers! Glory to Ukraine!”

Neither the MoD nor the AFU specified where in Ukraine the strike took place.

Russian troops invaded Ukraine in what the Kremlin is calling a “special military operation” to “demilitarize and denazify” the country.

The invasion is now in its 58th day.

The FIM-92 Stinger is a man-portable air-defense system that operates as an infrared homing surface-to-air missile and can be adapted to fire from a wide variety of ground vehicles and helicopters.

It was developed in the United States and entered service in 1981. It is used by the militaries of 30 other countries, including Ukraine, but not Russia.

The Mil Mi-8 is a medium twin-turbine helicopter, originally designed by the Soviet Union, and now produced by Russia.

It is most commonly used as a transport helicopter, but it is also used as an airborne command post, an armed gunship, and a reconnaissance platform.

It is among the world’s most-produced helicopters and is used by over 50 countries, including both Ukraine and Russia.

The Air Force Command of the AFU said that in addition to the two Mi-8s, Ukrainian anti-aircraft defense units “destroyed 15 enemy air targets, including nine Orlan-10 unmanned aerial vehicles” on the same day.

Anti-aircraft missile units of the East Air Command also reportedly destroyed two Russian warplanes – an Su-34 and an Su-35, according to preliminary data – in the direction of Izium, in eastern Ukraine, also on the same day.