Solar Energy Lights Up The Night In Tel Aviv

LumiWeave is an eco-friendly tool to provide shade by day and illumination by night.
By Abigail Klein Leichman April 25, 2022
Facebook
Twitter
Linkedin
Email 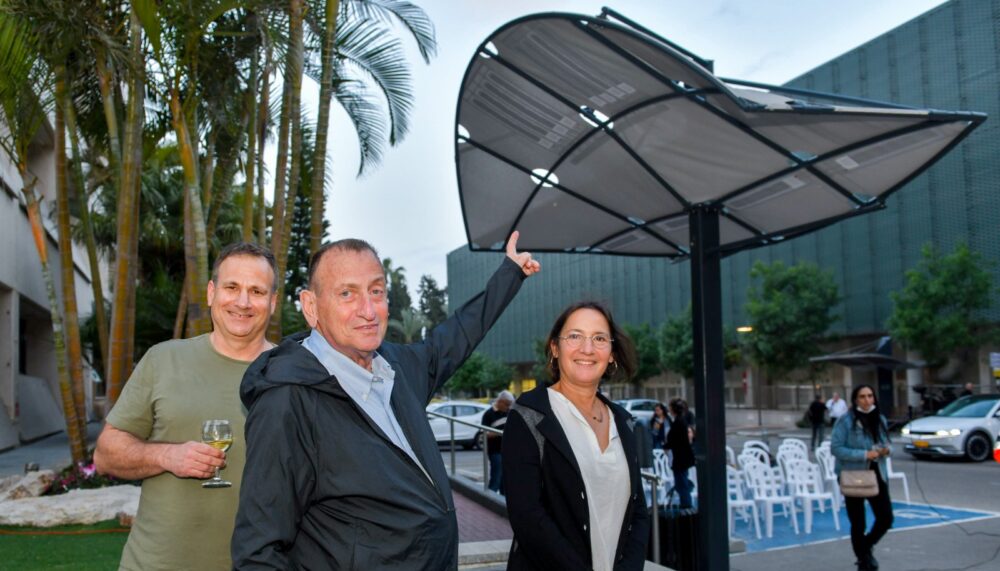 Tel Aviv is bathed in sunshine practically year-round, so why not use that abundant free energy source for more than just rooftop water heaters?

Combining energy harvesting and lighting without connecting to electricity, the lightweight and flexible LumiWeave was the winning project in the 2020 international Women4Climate Tech Challenge sponsored by C40 Cities, of which the Tel Aviv-Yafo municipality is a member.

Now, the municipality is testing LumiWeave as a way to provide zero-emissions daytime shade and nighttime lighting at Atidim Business Park.

The pilot project, organized in collaboration with the CityZone Innovation Laboratory operated by Atidim Park and Tel Aviv University, is overseen by Green and LumiWeave co-founder Tal Parnes, a high-tech entrepreneur.

Due to its simple features, LumiWeave claims to save at least half of the installation costs of standard lighting infrastructure, since it makes electrical infrastructure and heavy-duty construct redundant. It also saves 100 percent of the electricity costs. LumiWeave even allows the customer to control the time and intensity of lighting and meets all safety standards.

The main components of LumiWeave are a flexible organic photovoltaic sheet adhered to a UV-resistant fabric. This fabric is imprinted with conductive copper-based ink that acts as a circuit board. Intertwined with this fabric are polymer strips with LEDs.

Green designed the sheeting to withstand any weather condition; it carries a three-year warranty. And LumiWeave continues providing lighting even after three days without sun — which does happen occasionally during Tel Aviv winters.

LumiWeave is developing additional products with the sheeting material, including the SmartSol line of sidewalk café umbrellas that offer additional cool features, such as cellphone charging and automatic shadow position adjustment.

“I believe that LumiWeave will turn out to be a groundbreaking project,” said Tel Aviv Mayor Ron Huldai.

Huldai added the municipality also is “promoting urban plans to reduce greenhouse gas emissions, including a massive tree-planting program; expansion of green spaces; removal of polluting vehicles; and ongoing educational efforts in schools and in the public sphere.”

Solar radiation — also known as electromagnetic radiation — is emitted by the sun. While every location on Earth receives some sunlight over a year, the amount of solar radiation that reaches any one spot on the Earth’s surface varies, reports Energy.gov. Solar technologies capture this radiation and turn it into useful forms of energy.