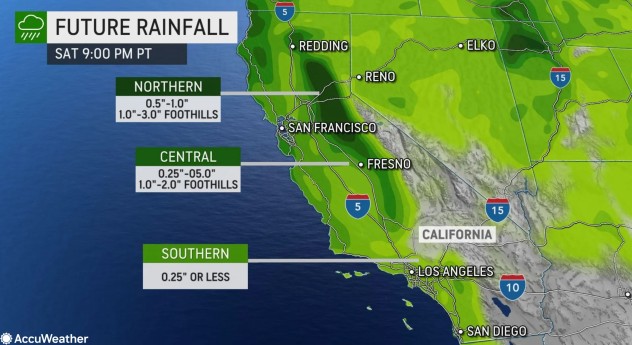 A snowstorm in the mountains of California could be Mother Nature’s last hurrah in a lackluster wet season in which drought has expanded across the parched state.

The late-season storm arrived in Northern California on April 20 and is expected to bring rain across the lower elevations and bury parts of the Sierra Nevada in more than 4 feet of snow. Precipitation will fail to reach the  Southwest desert, but the storm will likely make its presence felt there with strong winds threatening to fan ongoing blazes and ignite new ones.

“The amount of rain will increase water levels a small amount but will fall well short of what is needed to replenish them to the typical levels for late April,” AccuWeather meteorologist Ryan Adamson said about the rain sweeping through California and its impact on the state’s reservoir levels.

AccuWeather meteorologists say the storm’s most significant impact in the Golden State will not be the rain but rather the heavy snow it unloads in the mountains. Before the last flake falls, 2-4 feet of snow with an AccuWeather Local StormMax™ of 54 inches is forecast above an elevation of about 7,000 feet in the Sierra Nevada.

The California Highway Patrol posted a picture on Twitter Thursday morning of a vehicle that slid off the roadway and into a river in Truckee, California, as snow fell heavily.

“Snow is coming down heavy in Truckee so a little word of [advice] &mldr;. SLOW DOWN before you end up in a ditch or the river,” the law enforcement agency tweeted.

Forecasters expect a quick return of dry, mild weather in the storm’s wake.

“Long-range forecasts indicate that a new storm could arrive in the Pacific Northwest every few days [next week]. In much of California, however, time may be running out,” Adamson said.

Each of the storms next week may graze Northern California, but a majority of the state will miss out on any meaningful rainfall.

As April transitions into May, normal precipitation levels fall drastically. For example, rainfall in San Francisco goes from an average of 1.36 inches in April to just 0.48 of an inch in May. Similar drops occur elsewhere in the state, with far southern portions of California averaging only 0.25-0.30 of an inch of rain in May in cities such as Los Angeles and San Diego.

Los Angeles is expected to experience a 25-degree temperature swing from Friday to next Monday, with highs in the middle 60s being replaced with record-challenging 90-degree heat. Near-record warmth is also anticipated in San Diego early next week as temperatures top out in the lower 80s by Monday.