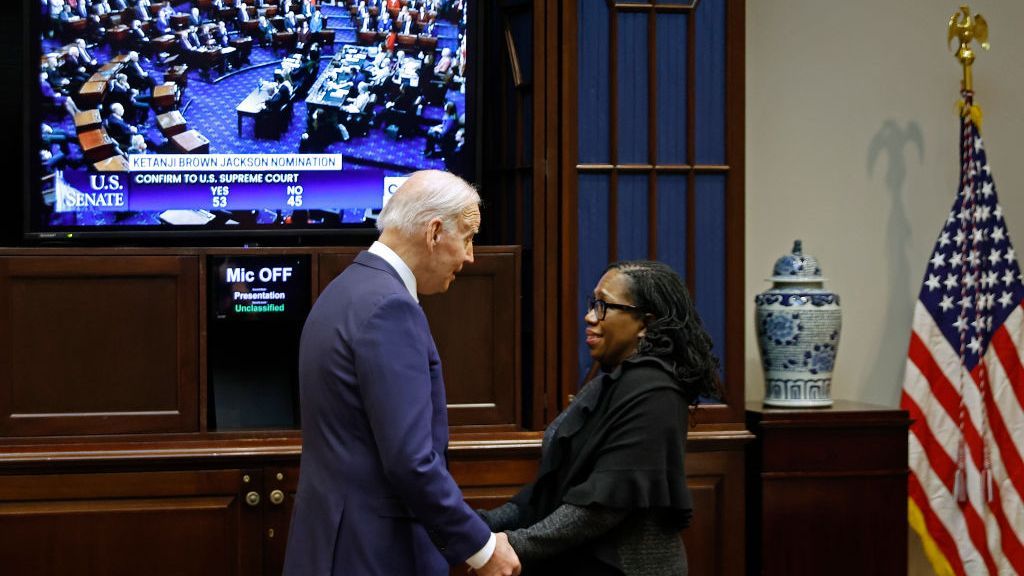 U.S. President Joseph R. Biden Jr. congratulates Ketanji Brown Jackson moments after the U.S. Senate confirmed her to be the first Black woman to be a justice on the Supreme Court. They are shown in the Roosevelt Room at the White House on April 7, 2022, in Washington, DC. (Chip Somodevilla/Getty Images)

Ketanji Brown Jackson, who will become the first Black woman to serve on the United States Supreme Court after winning Senate confirmation in a 53-to-47 vote on April 7, refused to get trapped in a discussion on religion during the hearings.

“You have a wonderful family. You should be proud,” Graham told Jackson during the committee hearings. “And your faith matters to you. What faith are you, by the way?”

Jackson initially responded that she was a “nondenominational Protestant,” but Graham cut in and asked if she felt that she could judge a Catholic person fairly, and she responded, “Senator, I have a record of &mldr; judging everyone ”

Graham interrupted Jackson again and replied, “I’m just asking this question because how important is your faith to you?”

During Graham’s questioning, Jackson gently admonished him about the separation between church and state established by U.S. Constitution.

“Personally, faith is very important — but as you know, there’s no religious test in the Constitution under Article 6,” Jackson said, referring to the part of the U.S. foundational document that prohibits public officials from submitting to religious proof tests.

“It’s very important to set aside one’s personal views about things in the role of a judge,” Jackson said.

Graham said he agreed but continued to pepper Jackson with religion-related questions, such as asking her to rank “how faithful” she is on a scale of 1 to 10 and inquiring how often she goes to church. “I go to church probably three times a year, so that speaks poorly of me,” Graham said.

Jackson limited Graham’s spiritual inquisition by saying: “Senator, I am reluctant to talk about my faith in this way just because I want to be mindful of the need for the public to have confidence in my ability to separate out my personal views.”

“I have no doubt that your faith is important to you, and I have zero doubt that you can adjudicate people’s cases fairly if they’re an atheist,” Graham replied. “You should be proud of your faith. I am convinced that whatever faith you have — and how often you go to church — will not affect your ability to be fair.”

Alice Thomas, an associate professor at the Howard University School of Law, said for the senator to ask her about her faith was not only wrong but “unfair.”

“In an employment situation, you can’t ask people about their faith,” Thomas pointed out.

While a Senate confirmation hearing is not a typical job interview, where it is indeed illegal in the United States to ask about someone’s religion, the Freedom from Religion Foundation said Graham “had an ax to grind and was exploiting the hearing to claim that [Supreme Court Justice] Amy Coney Barrett was ‘treated very, very poorly’ during her confirmation hearings” to serve on a federal appeals court in 2017.

Barrett had written a law review article about how “Catholic judges” who believe their religion prohibits them from handing down a death sentence should handle cases involving capital punishment. She was pressed on the matter by Sen. Diane Feinstein, a California Democrat, during the hearings.

“A judge’s personal religious beliefs should not impact their ability to do the job, and if it does, they should find a new line of work,” the Freedom from Religion Foundation says in a March 22, 2022, article posted on its website.

Paula Matabane, communications professor emerita at Howard University and a minister in the African Methodist Episcopal Church, said, “What is very clear to me is Judge Jackson is a woman who is deeply rooted in the spirit of God.”

Matabane said she watched the confirmation hearings nonstop. Jackson doesn’t have to talk about faith — she lives it, Matabane said. “Look at how she carries herself. She is more than a legal intellectual; she is a spiritually mature woman.”

“They have asked her almost (all) insulting questions, and she is able to reverse and bring a calmness through all of those hostilities, and she comes back with a spirit of peace.”