New study is based on analyses of a new, 115-million-year-old fossilized head crest of the pterosaur Tupandactylus imperator.
By Sofija Dizdarevik April 25, 2022
Facebook
Twitter
Linkedin
Email 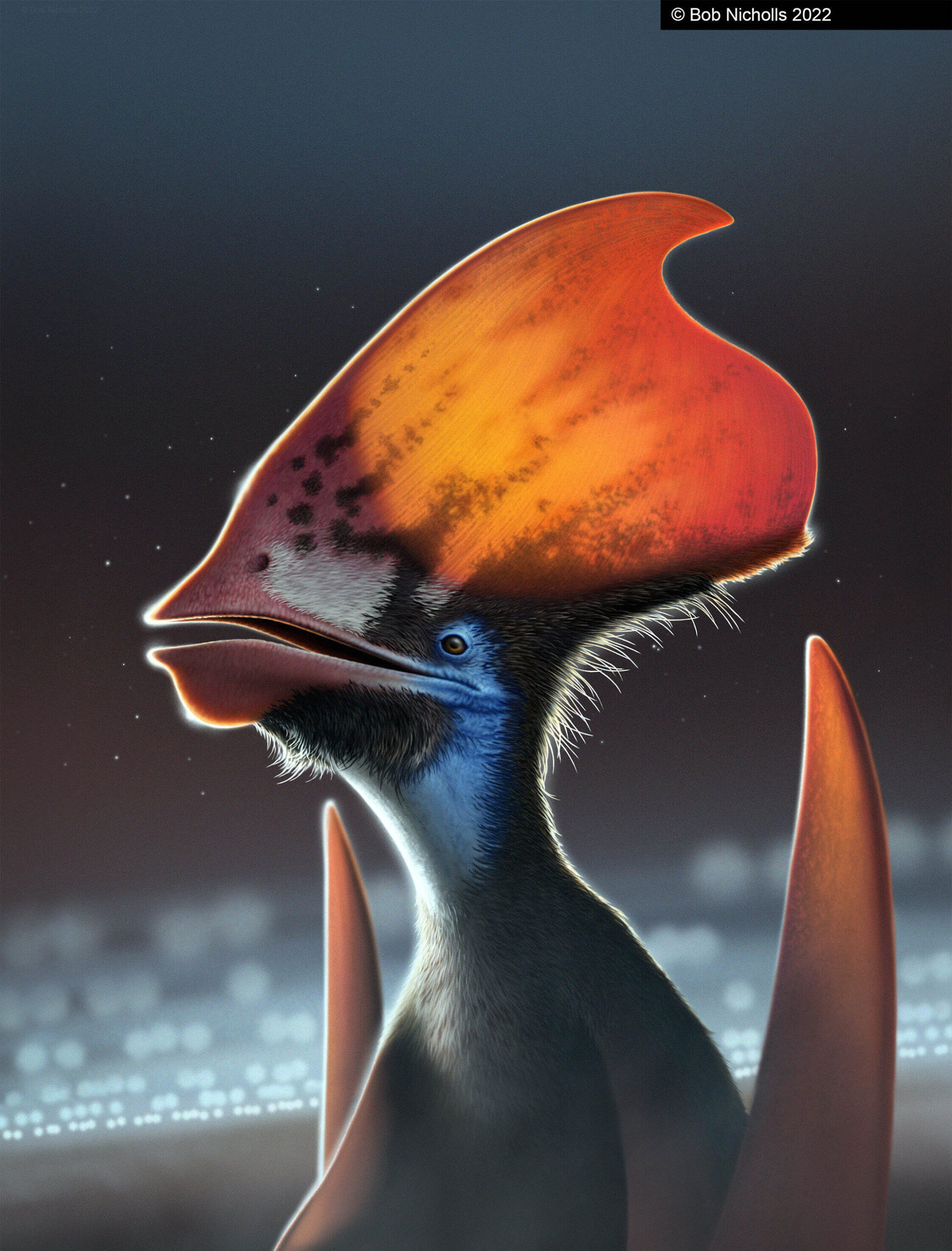 Artist’s reconstruction of the feathered pterosaur Tupandactylus, showing the feather types along the bottom of the headcrest: dark monofilaments and lighter-coloured branched feathers. (Bob Nicholls 2022/Zenger).

One of the great unsolved mysteries about dinosaurs as to whether flying pterosaurs had feathers or fur has been solved after the discovery of a remarkable prehistoric fossil that can be clearly seen to have been feathered.

An international team of paleontologists has now officially presented this fossil proof that pterosaurs, the flying relatives of dinosaurs, not only had feathers but were also able to control the color of their feathers using melanin pigments.

The study, published in the journal Nature, was led by University College Cork (UCC) paleontologists Dr. Aude Cincotta and Professor Maria McNamara, and Dr. Pascal Godefroit from the Royal Belgian Institute of Natural Sciences, with an international team of scientists from Brazil and Belgium.

The new study is based on analyses of a new, 115-million-year-old fossilized head crest of the pterosaur Tupandactylus imperator from north-eastern Brazil. Pterosaurs lived side by side with dinosaurs, from 230 to 66 million years ago.

This species of pterosaur is famous for its huge head crest. The team discovered that the bottom of the crest had a fuzzy rim of feathers, with short, wiry hair-like feathers and fluffy branched feathers.

“We didn’t expect to see this at all”, said Dr. Cincotta. “For decades paleontologists have argued about whether pterosaurs had feathers. The feathers in our specimen close off that debate for good as they are very clearly branched all the way along their length, just like birds today.”

The team then studied the feathers with high-powered electron microscopes and found preserved melanosomes – granules of the pigment melanin. Unexpectedly, the new study shows that the melanosomes in different feather types have different shapes.

“In birds today, feather color is strongly linked to melanosome shape,” said Prof. McNamara. “Since the pterosaur feather types had different melanosome shapes, these animals must have had the genetic machinery to control the colors of their feathers. This feature is essential for color patterning and shows that coloration was a critical feature of even the very earliest feathers.”

Thanks to the collective efforts of the Belgian and Brazilian scientists and authorities working with a private donor, the remarkable specimen has been repatriated to Brazil.

Dr. Godefroit added: “It is so important that scientifically important fossils such as this are returned to their countries of origin and safely conserved for posterity.

“These fossils can then be made available to scientists for further study and can inspire future generations of scientists through public exhibitions that celebrate our natural heritage.”