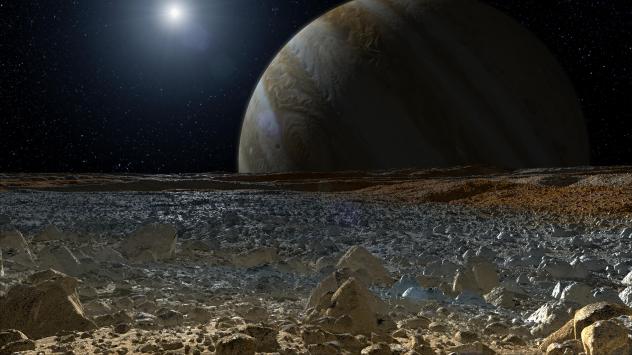 An artist's concept shows a simulated view from the surface of Jupiter's moon Europa. The planet Jupiter looms over the horizon. (NASA/JPL-Caltech)

Life in outer space might be more than a sci-fi fantasy.

Scientists studying Europa, one of Jupiter’s most famous icy moons, have found that some of its frozen features are similar to those on Greenland, which suggests the moon could hold life.

A study published Tuesday in the journal Nature Communications studied double ridges — a geological feature common to Europa comprised of two parallel ridges and a central trough down the middle — a feature also found in northwestern Greenland.

Stanford University geophysicist Riley Culberg, the lead author of the study, and his team looked at the formation of Greenland’s double ridge and found it was formed by a process that would leave shallow liquid water embedded within the ice, meaning that the moon could hold life.

Europa is a young, geologically active moon with a large subsurface ocean beneath its icy shell. The moon has a diameter of 1,940 miles, making it a bit smaller than Earth’s moon, but the fourth-largest of Jupiter’s 53 known moons.

The moon is one of the likeliest candidates to hold life, given the discovery of the large, saltwater ocean that has been detected beneath the ice.

Though Europa is only one-fourth the diameter of Earth, its ocean may contain twice as much water as all of Earth’s oceans combined. Europa’s vast and unfathomably deep ocean is widely considered the most promising place to look for life beyond Earth, according to NASA Science. A passing spacecraft might be able to sample Europa’s ocean without landing on the moon’s surface. The reason: It is possible Europa’s ocean may be leaking out into space.

“Jupiter’s moon Europa is a prime candidate for extraterrestrial habitability in our solar system,” the study says. Culberg’s discovery of potential water pockets closer to the surface provides yet another potentially hospitable habitat for alien life.

However, the alien life found on Europa is much more likely to be microbial than anything viewable with the human eye. Still, such a discovery would be important.

In 2024, NASA’s robotic Europa Clipper spacecraft will launch with the mission of investigating whether Europa could be a suitable habitat for life. The orbiter will loop around Jupiter, allowing it to perform multiple close flybys of the beautifully icy moon. If the moon appears habitable, future missions to the far-off spot in our solar system seem likely.

For the latest weather news, check back on AccuWeather.com.