Beaches Are Eroding In A Popular North Carolina Resort Area

To protect the Cape Hatteras lighthouse, the tallest in the U.S., it was moved some 1,500 feet from shore.
By Marianne Mizera April 25, 2022
Facebook
Twitter
Linkedin
Email 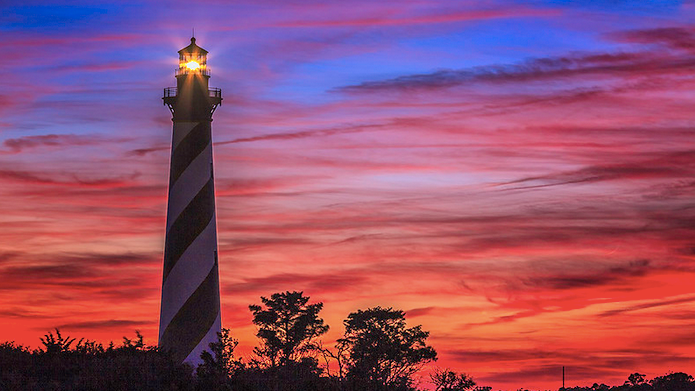 The Cape Hatteras Lighthouse, built in 1870, against a blazing sunset. Over time, natural beach erosion and rising sea levels left only 60 feet between the beacon and the ocean waters. (Dave Arnold/Flickr)

Millions of tourists each year flock to the famous barrier islands that dot North Carolina’s coastline, known as the Outer Banks.

One of most popular attractions is the 152-year-old Cape Hatteras Lighthouse, which guided weary seafarers for decades through the dangerously swift-changing sandbars of the Atlantic — eerily dubbed “The Graveyard of the Atlantic.” A spiraling red staircase beckons tourists with the stamina to climb to the top.

But over time, natural beach erosion and rising sea levels have taken their toll, leaving only 60 feet between the beacon and the ocean waters. This forced local officials and preservationists in 1999 to move the nation’s tallest lighthouse to its current location — some 1,500 feet from shore.

The effort turned into a controversial multimillion-dollar project. But in the end, a historic lighthouse was saved.

Fast-forward more than two decades later — officials and residents are still trying to contend with the persistent problem of an eroding shoreline.

“They were always eroding, and it’s probably not the best idea to build anything right next to the beach and think you’re going to be able to keep it there for hundreds of years,” David Hallac, superintendent of the National Parks of Eastern North Carolina, told Kim Leoffler, a reporter for AccuWeather.

“We have confidence in saying that sea-level rise has and will likely continue to exacerbate these erosive forces affecting the beaches,” he said.

The National Park Service tried beach nourishment, installing jetties as well as using sandbags to hold back the sea, but realized it needed to take more drastic action and move the lighthouse.

While the lighthouse may sit at a safe distance from the coast for now, the state is still keeping a close eye on the encroaching waters in the area.

Today, Hallac said, the sea level is rising at 5.3 millimeters per year. “That doesn’t sound like a lot, but it’s the equivalent of 1.74 feet over 100 years,” he said.

Danny Couch, a local commissioner in Dare County, North Carolina, which comprises most of the Outer Banks communities, told AccuWeather that natural forces like “rising water tables” continue to impact the resorts.

It’s “one of the most dynamic geologic processes out there, so any little thing that man tends to do, tends to have a huge impact … so we’re trying to be a little smarter about the future.”

Also, as a lifelong resident of North Carolina, Couch can attest that “the storms are getting a little more ferocious.”

The county has spent nearly $100 million on projects as one way of replenishing the shoreline. These “beach nourishment projects” pump sand from an offshore source onto the shore, according to Couch.

As the shoreline slowly continues to erode and with climate change playing a role, officials said a number of homes are sitting perilously close to collapsing. About 15 houses in the village of Rodanthe are in “imminent” danger along a stretch appropriately named Ocean Drive, he said.

From a safety standpoint, the county has tagged 11 of those homes for hazards, such as compromised steps or decks or to “an outright loss of the septic system,” according to Couch.

Couch can appreciate people wanting to live near the water, but local towns — and all property owners — need to react to environmental threats as they arise.

Beach temperatures at the Outer Banks is often in the high 80s. At its summer peak last year, temperatures topped at the low 90s, according to AccuWeather.

“I’m totally sympathetic of somebody who wants to come to a resort and have a house right on the ocean,” he said. “You get up in the morning, have a cup of coffee, watch a magnificent sunrise, see a pod of humpbacks go by. We certainly understand that, but at the same time, you have to save people from themselves. … It’s a big responsibility for any federal, state or local government. That’s why we do what we have to do from an enforcement standpoint.”

He said 8- to 10-bedroom homes are “colossal undertakings to try and relocate.”

“Have they been good for our economy? Absolutely.” But “we’re going to have to adapt.”

Rick Kearney, a homeowner in Beaufort, North Carolina, just south of the Outer Banks, is trying to do just that. For the last three or four years, he has noticed a change in the creek behind his home.

“I’m getting a lot of water in where it didn’t use to come in,” he said. “You’ll see that some marsh grass has washed up. That didn’t use to happen, except maybe during a hurricane. Now, if you get an extra high tide, the water comes up over the rocks.”

So Kearney and other property owners, with the financial help of the North Carolina Coastal Federation, have been installing “living shorelines” to help restore the marsh and break up the waves that trap sediments behind it. That allows plants to grow and marine life to use the space as a habitat.

In this instance, quick reefs made up of recycled oyster shells and limestone are being used as “living shorelines.” The federation has split the cost to get them installed.

“A lot of our sites are experiencing shoreline erosion, and it’s due to a variety of factors: the increased frequency of tropical storms and hurricanes, boat wakes, sea-level rise, higher-than-normal high tides,” said Lexia Weaver, a coastal scientist with the federation.

The living shorelines are being installed in many coastal communities across the country.

“This is property owners and folks realizing that things are changing. There needs to be solutions that work with the environment and their pocketbooks,” said Tancred Miller, of North Carolina’s Division of Coastal Management.

Mankind is going to have to accommodate Mother Nature and the ever-changing landscape.

“From a science standpoint, you ultimately have to resolve things like climate control,” Couch said. “You have to reconcile the science with the fact that you have to live here.”

For the latest weather news, check back on AccuWeather.com. Watch the AccuWeather Network on DIRECTV, Frontier, Spectrum, fuboTV, Philo, and Verizon Fios. AccuWeather Now is available on your preferred streaming platform.