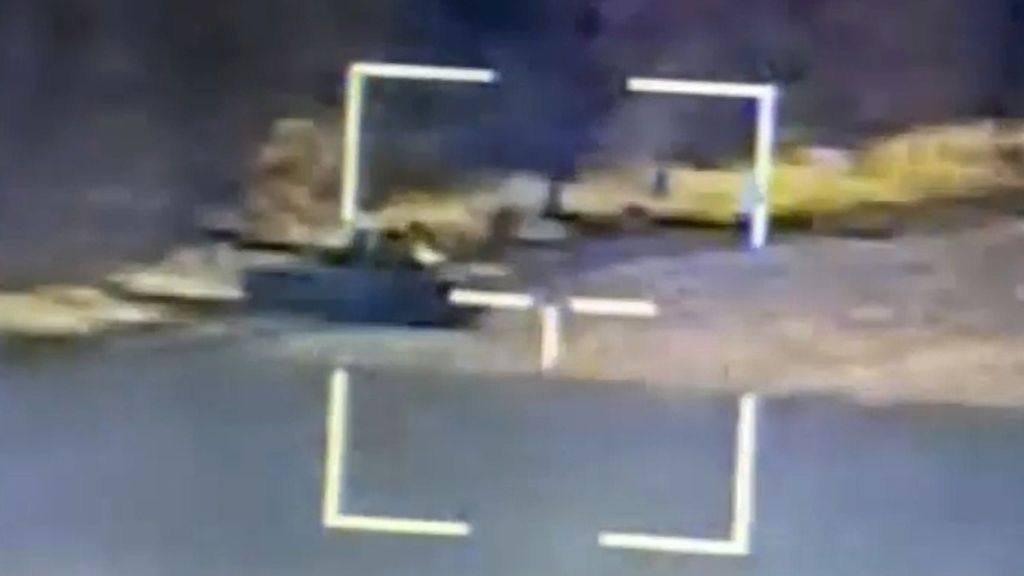 Fighters from the 128 brigade from a distance of 4,5 km destroyed Russian moving tank in April 2022. (@128brigade/Zenger)

This video shows a Russian tank caught in the crosshairs shortly before a Ukrainian anti-tank guided missile fired from nearly three miles away blows it to smithereens.

The brigade titled the video (in Ukrainian): “Stugna against T-72: attackers of the 128th brigade destroyed a Russian tank with a Ukrainian missile from a distance of 4.5 kilometers [2.79 miles]”.

The Stugna-P is a Ukrainian anti-tank guided missile system developed by the Luch Design Bureau, located in the capital Kyiv.

The brigade said: “21 seconds passed from the moment of the shot to the defeat of the tank. The missile from the Stugna anti-aircraft missile system flies at a speed of 200-220 meters [656-721 feet] per second, so the enemy tank was at a distance of about 4.5 kilometers. He did not stand still, but moved, but this did not prevent the ATGM [anti-tank guided missile] operator from hitting him.”

The brigade added: “Neither the Swedish-British anti-tank complex NLAW (it is most effective at short distances, up to 600 meters) [2,000 feet] nor the American Javelin (which is effective up to 2.5 kilometers) [1.55 miles] work at such long distances. And our Stugna destroyed a moving tank 4.5 kilometers away.”

The brigade did not specify where in Ukraine the strike took place. However, fighting has recently been most intense along a 300-mile front in the country’s eastern Donbas region.

The 128th Mountain Assault Brigade is garrisoned in Mukachevo, in Western Ukraine, in peacetime.

The T-72 referred to by the brigade is a family of Soviet main battle tanks that entered production in 1969. They are currently used by over 40 countries, including both Russia and Ukraine, though the latter has retired most of them in favor of the earlier T-64.

The General Staff of the Armed Forces of Ukraine (AFU) reported earlier today that the Russian military death toll had reached 21,000 personnel.

Russian troops invaded Ukraine on February 24 in what the Kremlin is calling a “special military operation” to “demilitarise and denazify” the country.

The invasion is now in its 57th day, with Russia “most likely” to intensify attacks in Ukraine before its May 9 Victory Day celebrations, according to UK intelligence.