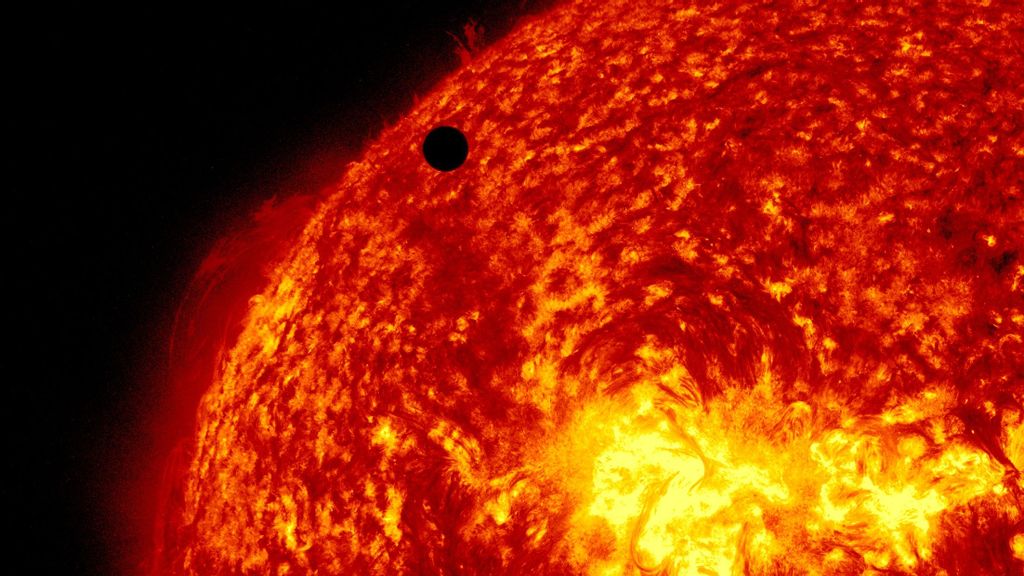 In this handout image provided by NASA, the SDO satellite captures an ultra-high definition image of the Transit of Venus across the face of the sun at on June 5, 2012 from space. The last transit was in 2004 and the next pair of events will not happen again until the year 2117 and 2125. (Photo by SDO/NASA via Getty Images)

NASA registered an M-Class solar flare on Wednesday and shared an image that highlights the “extremely hot material” in the powerful radioactive burst.

“NASA’s Solar Dynamics Observatory, which watches the Sun constantly, captured an image of the event.

“NASA’s Solar Dynamics Observatory captured this image of a solar flare – as seen in the bright flash in the upper left portion of the image– on April 20, 2022.

“The image shows a subset of extreme ultraviolet light that highlights the extremely hot material in flares, and which is colorized in yellow.

“This flare is classified as an M-Class flare. M-class flares are a tenth the size of the most intense flares, the X-class flares.”

NASA says on its website: “Solar flares are large eruptions of electromagnetic radiation from the Sun lasting from minutes to hours.

“The sudden outburst of electromagnetic energy travels at the speed of light, therefore any effect upon the sunlit side of Earth’s exposed outer atmosphere occurs at the same time the event is observed.

“When a strong enough solar flare occurs, ionization is produced in the lower, more dense layers of the ionosphere (the D-layer), and radio waves that interact with electrons in layers lose energy due to the more frequent collisions that occur in the higher density environment of the D-layer.

“This can cause HF radio signals to become degraded or completely absorbed. This results in a radio blackout – the absence of HF communication, primarily impacting the 3 to 30 MHz band. The D-RAP (D-Region Absorption Prediction) product correlates flare intensity to D-layer absorption strength and spread.

“Solar flares usually take place in active regions, which are areas on the Sun marked by the presence of strong magnetic fields; typically associated with sunspot groups. As these magnetic fields evolve, they can reach a point of instability and release energy in a variety of forms. These include electromagnetic radiation, which are observed as solar flares.”

«Previous Post
Aliens May Be Living In The Icy Shell Of Jupiter’s Tiny Moon Europa, According To New Research»Next Post
VIDEO: Earliest Aurora Borealis Record Found In 10th BC Annals Shows It Was Visible In China