Narelle Guthrie, 35, has traveled to the Polish border and into Ukraine - to help people find sanctuary in the United Kingdom.
By Anamarija Brnjarchevska April 22, 2022
Facebook
Twitter
Linkedin
Email 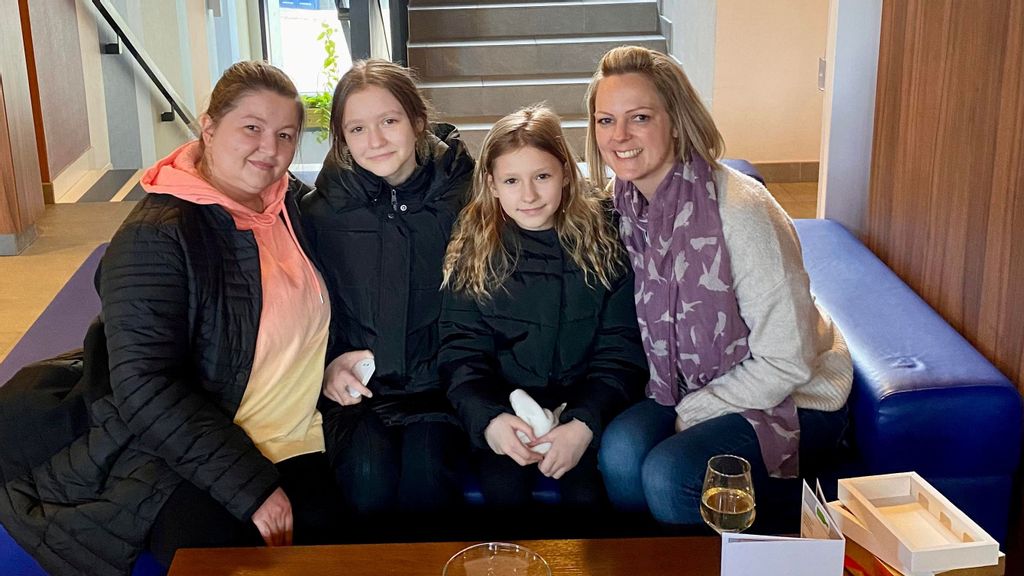 A big-hearted Brit mum has found homes in the UK - for more than a HUNDRED Ukrainian refugees. (Matthew Newby/Zenger)

A bighearted mum has found homes for more than 100 Ukrainian refugees.

Mother-of-three Narelle Guthrie, 35, has traveled to the Polish border and into Ukraine – to help people find sanctuary in the United Kingdom.

Narelle, of Devizes, a market town in Wiltshire, in the United Kingdom, has worked in refugee camps and kitchens and handed out blankets and humanitarian aid at train stations.

She also stood on the Polish-Ukraine border giving out her personal contact information “to as many people as possible to offer my help and support”.

Narelle has established a bank of translators, helped refugees fill in visa applications, and found families who will give them a temporary home.

She is part of a group called the LoveUkraine Devizes group and has paid for all her travel and costs herself – and has so far found homes for more than 100 Ukrainians.

Narelle is constantly fundraising when at home and is currently back in Poland for two weeks.

She says she spends her time “meeting, greeting and spreading the word of what the UK has to offer refugees”.

Narelle, who has a background in health and social care, admits she was inspired to take action as soon as the invasion began.

She said: “As soon as the war started I knew I wanted to take action.

“I started with collecting donations – my ex and my eldest child traveled to Paris to hand out items working alongside the French Red Cross.

”They then became admins on a Facebook page matching Ukrainian citizens and hosts across the whole of the UK.

“We then decided to scale it down to Wiltshire to be more specific and build a community of Ukrainians here in my hometown.

“Matching families with Ukrainians is not just a matter of finding a match for the sake of it, it has to be the best match.

”So the way I do it is to get to know the refugees, finding out as much as possible about them.

”Like do they have children, what their hobbies are, what jobs they do, who they would like to live with, are there any disability issues?

“It takes hours and hours and many late nights working to get it right. For instance, are they smokers, do they have pets?

”One lady I helped wanted to bring her pet turtle.

”Also, it’s important to try to arrange, as much as possible, for the Ukrainians to be homed in the same area with their wider families and friends’.’

Narelle was inspired by her 11-year-old son Xavier, who said: “Mum, we’ve got to do something to help.”

Narelle admits she had not planned on traveling to Poland until recent events in her employment “opened my eyes to how better I could use my time.”

She said: “I’ve traveled to Poland today (April 21) to volunteer for another 15 days where I will help other organizations on the borders.

“This time I will be managing a team of volunteers and coordinating the work that needs to take place, of which there is a lot.”

She has also paid for all of her volunteering – including flights and staying in hostels – with her savings.

Narelle described some of the worst stories she has heard, saying they involved the exploitation that women and children are facing in Ukraine.

She said: “There are so many children who are ‘stuck’ at the border and some have had to go back into Ukraine as their families had to leave their homes quickly with nothing.

“They have no documents and no passports with them so they cannot get out of the country and certainly cannot come to the UK!

“It sickens me to think that these people haven’t had time to stop, rest, reevaluate their lives and been given informed options to make informed choices”, she said.

She added: “One girl I met was only 13 and she had her younger brother with her and they were alone as their parents stayed to fight – it’s so sad.

“There is also so much sickness within refugee camps and it is inevitable with so many people in crowded spaces sleeping on camp beds.”

Narelle has also been fundraising in Devizes, where last week she raised 270 pounds (350 dollars) in the space of just three hours.

She explained that the money is going back into the material funds to allow a local lady in Devizes to continue to support her in making items to sell, such as bracelets, teddies, blankets and flags.

“Devizes town council have kindly given me a pitch in the shambles market every Saturday where volunteers will sell these items”, she said.

Narelle is now urging more hosts to come forward to offer to sponsor a Ukrainian citizen and is providing information on how people can offer their support if they cannot offer their homes.

She said: “Donate money, fundraise and ensure this goes to the right organizations that are spending it where it is needed, donate tinned food as these people are in desperate need of this food!”

She added: “Link up with support groups in your local communities and offer transport to help Ukrainians get around to meet people and complete essential tasks such as opening bank accounts, applying for benefits and seeking employment.

“Push for the government to speed up the visa process – some visas are still talking three to four weeks.

“You can contact MPs [Members of Parliament] to push the government for a helpline that actually gives accurate information!

“The more people that work together the better! We all have a voice and this is the time to use it if we want to make a difference.”

Narelle said she will continue to support the people of Ukraine and will go back to her job soon but only part-time, so she can dedicate her time to the cause.

She said: “I will continue to be a big part in the communities with Ukrainian citizens and have former positive friendships with many.

“I have connections across the UK where I have successfully matched families and will enjoy spending my time meeting these people over this year and beyond.”

The Reverand Keith Brindle, a co-organizer of LoveUkraine Devizes (www.loveukrainedevizes.org), added: “Narelle has made heroic efforts to support Ukrainians coming to Devizes, working tirelessly for refugees and host families.

”Her big heart and huge commitment has been such a help to people in a desperate and very complex situation and the success of matching families here with Ukrainian families has been largely due to her phenomenal work.”

The Mayor of Devizes, Chris Gay, called her “an unsung hero”.