Vanishing Act: Exploring The Case Of The Disappearing Moon

Cluster of volcanic eruptions nearly a millennium ago now thought the root cause of the moon not being visible.
By Thomas Leffler April 21, 2022
Facebook
Twitter
Linkedin
Email 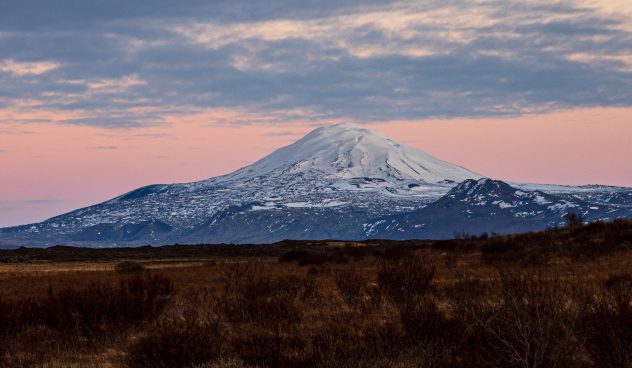 An eruption of Icelandic volcano Hekla, above, had long been thought to be the root cause of a multi-year disappearance of the moon. (Getty Images)

The welcoming golden light of the sun serves as the dawn of a new day, while the eerie white glow of the moon sends the human race into its nightly slumber.

But what if there was a day when one occurred without the other? What if that day became weeks or even months?

Such an occurrence took place nearly a millennium ago when the Earth’s moon disappeared from view during the month of May in the year 1110, with nary a reason known for the strange phenomenon. The unusual occurrence puzzled those who lived through it and continued to baffle astronomers throughout the ages. There was a belief that the moon’s disappearance was the result of an eclipse.

The British astronomer George Frederick Chambers wrote about the celestial mystery in his 1899 book “The Story of Eclipses.” About 800 years after it happened, Chambers pegged the date of the eclipse as having occurred on May 5, during the reign of Henry I.

“The totality occurred before midnight,” Chambers wrote of the moon’s disappearance from the night sky, adding that it was “evident that this was an instance of a ‘black’ eclipse when the moon becomes quite invisible instead of shining with the familiar coppery hue.”

But is that really what happened?

Finding out the root of the lunar absence became the work of a 2020 study in the journal Scientific Reports, leading to a more complex answer than originally thought.

The previously agreed-upon conclusion was that an eruption at Iceland’s Mount Hekla was the culprit. Hekla, located in the southern end of Iceland, was referred to as the “Gateway to Hell” by Europeans during the Middle Ages due to its frequent eruptions.

When an eruption took place at Hekla on approximately Oct. 15, 1104, sulfur-rich particles launched into the stratosphere. For many years, this event was thought to be the catalyst for the moon’s apparent disappearance.

The Scientific Reports study, led by a team from the University of Geneva in Switzerland, began to unravel new information concerning the moon’s whereabouts. To see whether the Hekla eruption was the sole cause of the disappearance, the researchers analyzed ice cores from Iceland and Antarctica and eventually determined that the date of the Hekla eruption did fit the 1110 timeline of lunar absence.

To find the true source, researchers combed through the records of medieval times for any references made to a “dark lunar eclipse” or a “black eclipse.” After pouring over many documents, the team made a breakthrough with the following 1110 entry from The Peterborough Chronicle: “[The moon] was so completely extinguished withal, that neither light, nor orb, nor anything at all of it was seen.”

Knowing the lunar absence began around 1110, the team suggests a cluster of volcanic eruptions from between 1108 and 1110 was most likely the root cause, not the 1104 Hekla eruption as previously thought.

One of these oft-forgotten eruptions took place in 1108 in Honshu, Japan. A diary entry from a Japanese statesman, uncovered by researchers and cited in the Scientific Reports study, said that an eruption of Honshu’s Mount Asama began in late August of 1108 and continued through that October.

“On August 29, there was a fire at the top of the volcano, a thick layer of ash in the governor’s garden, everywhere the fields and the rice fields are rendered unfit for cultivation,” the entry read. “We never saw that in the country. It is a very strange and rare thing.”

The 1108 eruption at Asama is one of what the study called “several major volcanic events” that is consistent with the “stratospheric aerosol loading sufficient to induce” the dark eclipse. Observations of changes to the moon, such as the dark, total lunar eclipse, as well as observations of dimming or discoloration of the sun, are major corroborators of the timing of major explosive volcanic activity.

On top of the eclipse, the 1108-1110 eruptions led to several societal impacts in Europe, particularly in agriculture. The researchers’ work revealed descriptions of an abundance of severe weather conditions, crop failures and famines compared to other years with similar volcanic events. Losing the lunar connection between Earth and the moon had several negative side effects, making its bright nightly appearance missed all the more.

For the latest weather news, check back on AccuWeather.com. Watch the AccuWeather Network on DIRECTV, Frontier, Spectrum, fuboTV, Philo and Verizon Fios. AccuWeather Now is available on your preferred streaming platform.