In the footage, Russian soldiers are seen communicating the coordinates before moving the rocket launcher into position.
By Lee Bullen April 21, 2022
Facebook
Twitter
Linkedin
Email 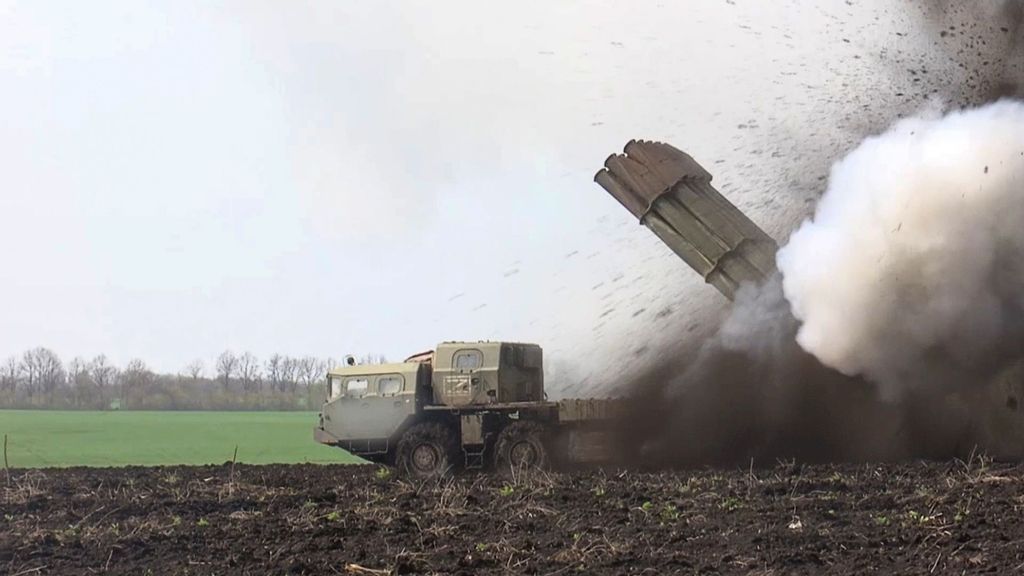 Sniper among artillery Smerch MLRS destroys the weapons of Ukrainian militants in April 2022. (Ministry of Defense of Russia/Zenger)

This is the moment Russian troops use a BM-30 Smerch multiple rocket launcher to destroy Ukrainian ammo depots.

The Russian Ministry of Defense (MoD) said reconnaissance teams identified a camouflaged airfield with ammunition and weapons depots in an unspecified region of Ukraine.

After the data was confirmed by technical officials, the coordinates were handed over to gunners who moved a BM-30 Smerch multiple rocket launcher into position and carried out a salvo launch, a simultaneous discharge of two or more rockets.

The Russian unit then reportedly fired a volley of missiles at the Ukrainian targets within minutes of first identifying them.

The Russian MoD said on April 21: “According to reconnaissance reports, AFU [Armed Forces of Ukraine] units stored ammunition, military equipment and weapons at a camouflaged airfield to supply a group of troops.

“The Smerch multiple-launch rocket launcher, having been tasked with destroying armament and ammunition depots, loaded rockets and moved to a firing position.

“The troops discovered the position of the target and conducted a salvo launch.”

In the footage, Russian soldiers are seen communicating the coordinates before moving the rocket launcher into position.

Troops are seen directing the rocket launcher towards the targets before firing a flurry of missiles, reportedly at the camouflaged Ukrainian airfield.

Russia invaded their neighbors Ukraine on February 24 in what the Kremlin called a “special military operation” in the sovereign European country.

Today marks the 57th day of the invasion. From February 24 to April 20, the total combat losses of Russian troops stand at 20,900 personnel, according to the General Staff of the Armed Forces of Ukraine.

Fighting between Ukrainian and Russian forces is said to be ongoing along a 300-mile frontline in the east of the country as Moscow pushes to capture the Donbas region.

Russian President Vladimir Putin is also said to have called off storming the Azovstal steelworks plant in Mariupol, instead ordering his troops to seal it.