The colorful spectacle at the Tregothnan Estate has been growing for around 170 years and is continuing to wow onlookers.
By Anamarija Brnjarchevska April 21, 2022
Facebook
Twitter
Linkedin
Email 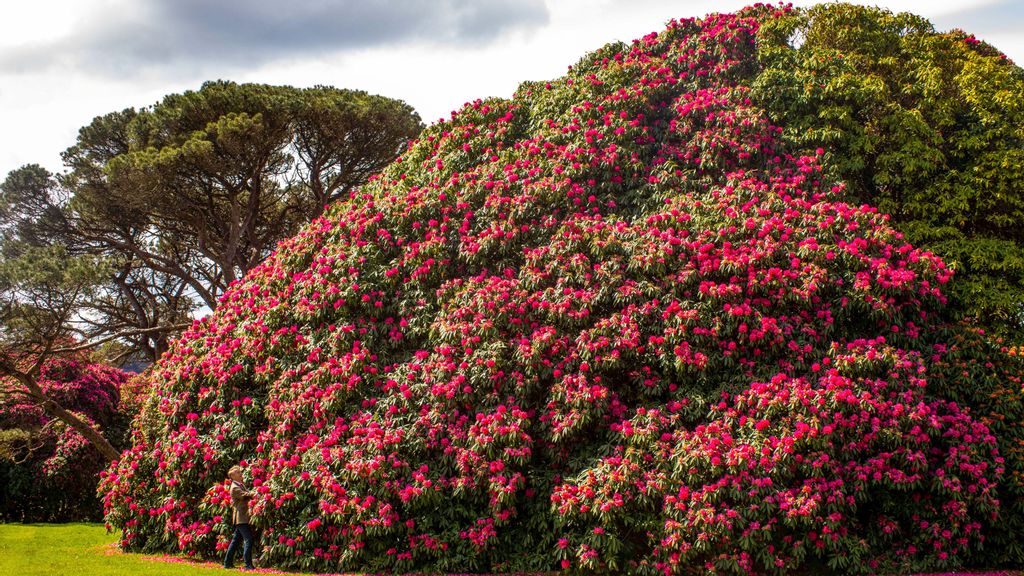 One of the biggest rhododendrons in Europe reaching full bloom. (James Dadzitis/Zenger)

These stunning images show one of the biggest rhododendrons in Europe aged 170 years reaching full bloom.

The colorful spectacle at the Tregothnan Estate has been growing for around 170 years and is continuing to wow onlookers.

Internationally known as the home of English tea, Tregothnan near Truro, Cornwall, in the United Kingdom, is an official ‘safe site’ for the keeping of rare or endangered trees from all over the world.

Managing director Jonathan Jones said: “Our rhododendrons are some of the oldest in the country – this bush is over 170 years old and is still growing.

“What we see here is not only potentially the tallest rhododendrons in the UK with the largest diameter but also one of the biggest demonstrations of mass species conservation in the wild.

“Tregothnan is home to the tallest of many flowering species in the UK, and our rhododendron bushes are going to be checked by the champion tree organization in the run-up to next Spring’s garden opening.”

Mr. Jones says the rhododendron plant originally comes from the Himalayas and added: “Our bushes really like the conditions that the microclimate offers here at Tregothnan.

“The conditions, like temperature, morning must, rainfall and soil, are almost identical to the plant’s origins”.

Mr. Jones said another reason for the bush’s excellent growth this year is due to this April’s “wet” conditions.

He added: “After four years of droughts, this has been a good April, just perfect for rhododendron flowers and tea growing.

“The amount of flowers on the rhododendron bushes is usually an indication if we’re going to get a good tea harvest – and we certainly have.

“We think we’re going to have a bumper spring harvest this year.”

Another factor that contributes to the successful growth is when various bushes of the same species are planted together.

He said: “Rhododendrons are very happy grown on mass together, they create their own environment.

“What we are seeing here is a fantastic example of what we call ex situ conservation.

“This means the plant is not in its natural habitat, but being grown in another country, yet are still thriving under their current conditions which then allows us to conserve lots of natural species.”

The diameters of the plant will be revealed next year at the world’s largest garden opening for charity.