VIDEO: Meet The Grumpy Senior Dog Who Hilariously Refuses To Take Part In His Hydrotherapy Sessions 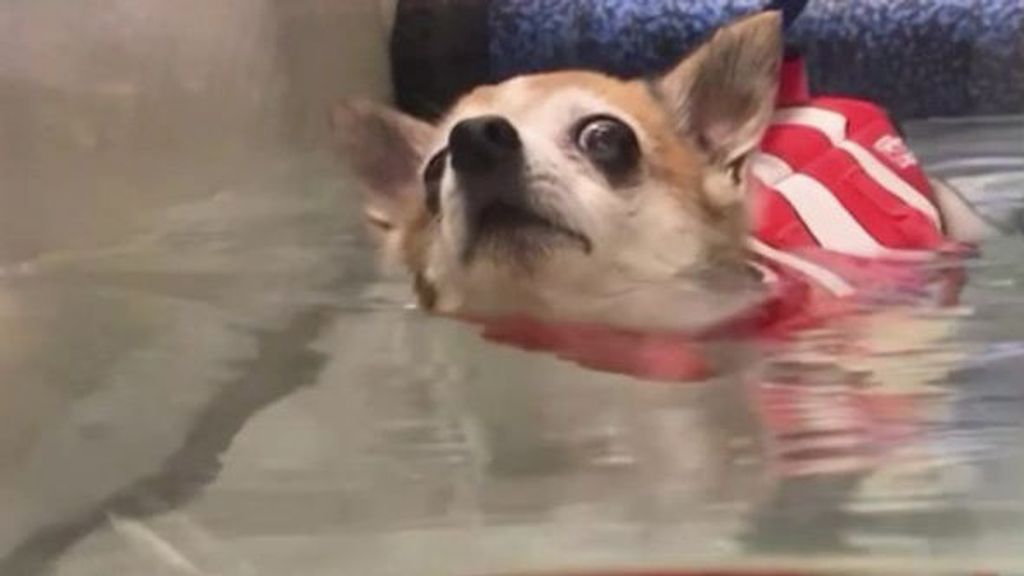 The grumpy dog who hilariously refuses to take part in his hydrotherapy sessions. (Kathryn H/Zenger)

Meet the grumpy dog who hilariously refuses to take part in his hydrotherapy sessions.

But the elderly dog refuses to do his part and waits for the instructor to drag him around the pool.

She was living in New York City at the time and had recently finished graduate school.

Kathryn saw his profile on PetFinder, put in an application and met him with his foster team for an introductory walk in the East Village in New York.

She said: “I saw Lil Hobbs and thought that was the cutest name I’d ever heard!

“The first time I saw him&mldr; I had never seen a dog walk slower than him!

“After half a block, he had to take a break and just melted into my arms – he doesn’t let most people hold him, so he must have felt comfortable with me.”

After she adopted him, a veterinarian told Kathryn that Lil Hobbs had a lot of underlying health issues including scar tissue from torn ligaments that never healed, cataracts, arthritis, loose and fractured teeth, and permanent hobble in his walk.

In July 2021, she began hydrotherapy for Hobbs at The Animal Acupuncture and Rehabilitation Center, in San Diego, California.

Hydrotherapy is a great low-impact exercise for Hobbs, who will slowly build up his endurance so he can walk or swim for longer.

“He is just a generally grumpy dog! He’s not fond of exercising so will just refuse.

“He is also not great with other people, so he can be a bit spicy at the sessions.

“I don’t know much about his past, other than that he was a stray found in the Bronx. It’s clear he must have had a hard life.

“He has a few health conditions, on top of a generally spicy personality.

“Lil Hobbs has such a deceptively sweet face that I was pretty surprised by how grumpy he is.

“He’s still a grumpy old man, but I love him regardless.”

She has taken to social media apps Instagram and TikTok to share his pictures and updates with her friends and family.

Kathryn described that the most incredible part of having a large social media platform is her ability to contribute to organizations and causes that she loves.

She has fundraised thousands of dollars for local animal rescues and now has an ongoing campaign to raise money for humanitarian aid in Ukraine, where she once lived.

She said: “I love making Hobbs content, so it’s mostly just a fun side hobby for me.

“I never imagined so many people from all over the world would follow him and have so much love for him.

“We have an incredibly kind fan base, so I’m really thankful that their generosity and engagement helps make his charity work possible.”

Lil Hobbs’ social media pages have been the perfect platforms for Kathryn to describe the joy and creativity he has brought to her, encouraging people to give senior dogs a chance.

She said: “I began painting again after a long hiatus, just because I wanted to make a portrait of him.

“I wrote a children’s book about his adventures, I’ve learned how to edit videos and do special effects, and so much more.

“He’s given me an outlet to express my love of art and media, something that isn’t always possible when I’m working on spreadsheets and budgets in my day job.

“Studies even show people with pets are happier and generally live longer – they can boost your brain’s production of oxytocin, serotonin and dopamine and reduce stress by lowering your cortisol.

“Being a pet owner does take time and energy, but it’s completely worth it.”