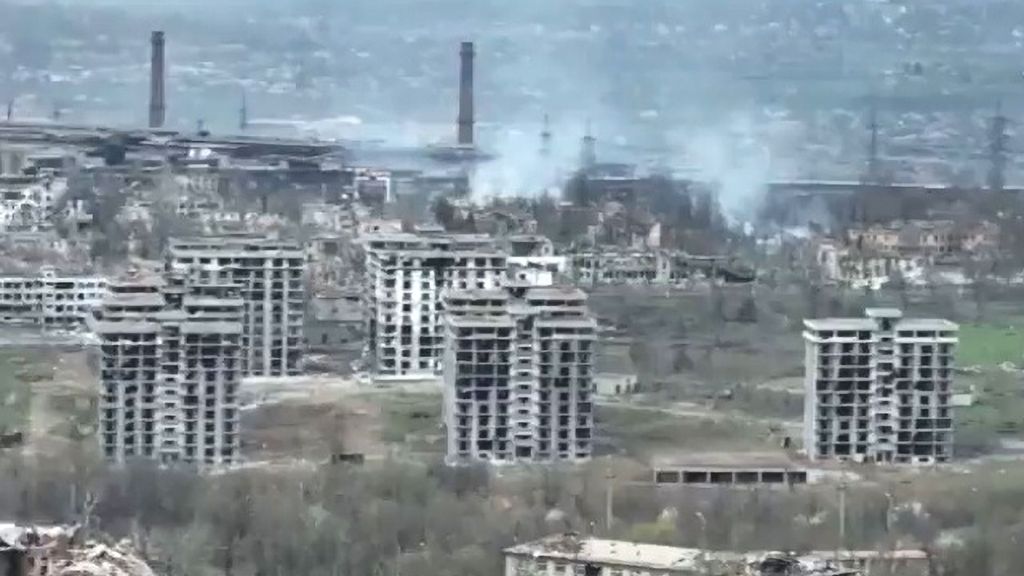 Mariupol, Ukraine, destroyed by the war, in April, 2022. (Ministry of Defence of Ukraine/Zenger)

This footage shows how Mariupol is left looking like something out of the film ‘Mad Max’ as Russian forces storm the last Ukrainian holdouts in the devastated city.

The Ukrainian MoD said: “Invictus Mariupol. Here, even the stones do not surrender to the enemy.”
They ended their statement with the hashtag “#ArmUkraineNow”.

Since the start of the invasion, at least 95 percent of the city has been destroyed, largely by Russian bombardments, say Ukrainian officials. Only two Ukrainian-held pockets remained at the time of writing.

Russian-backed special forces are reportedly storming the city’s Azovstal steelworks plant, where the last remaining Ukrainian troops are said to be holed up.

Ukrainian officials said that many civilians, including children, were among those taking shelter in the large, industrial area. Representatives from the self-proclaimed Donetsk People’s Republic denied this.

An ultimatum from the Kremlin on Sunday and then again on Tuesday to remaining Ukrainian fighters in Mariupol to capitulate was ignored.

Moscow is believed to view the port city as a major strategic prize that would leave Russia with an uninterrupted band of territory from the northeast to the south of the country.

The Ukrainian authorities have said that tens of thousands of civilians have died during the siege of the city, which saw a maternity ward and children’s hospital and the Donetsk Academic Regional Drama Theatre bombed and residential areas shelled.

Russian forces are now attacking enemy positions along the length of the 300-mile front line in the Donbas region, with the Kremlin claiming that over 1,000 Ukrainian targets were struck overnight.

Ukrainian officials reported that Russian troops had seized control of the small city of Kreminna, in the Luhansk region.

The Donbas is Ukraine’s former coal- and steel-producing region and is home to many Russian speakers.

Russian President Vladimir Putin has accused Ukraine of carrying out genocide in the region. US officials have labeled this claim as propaganda.

Parts of the region were seized by pro-Russian separatists in 2014 and now call themselves the Luhansk and Donetsk People’s Republics.

Although the focus of the invasion is now firmly on eastern Ukraine, Russian forces have continued to strike several locations throughout the rest of the country in recent days.