The environmental cop, named only as Officer Fonda, freed the bird of prey from the picnic table near the town of Carlton.
By Lee Bullen April 21, 2022
Facebook
Twitter
Linkedin
Email 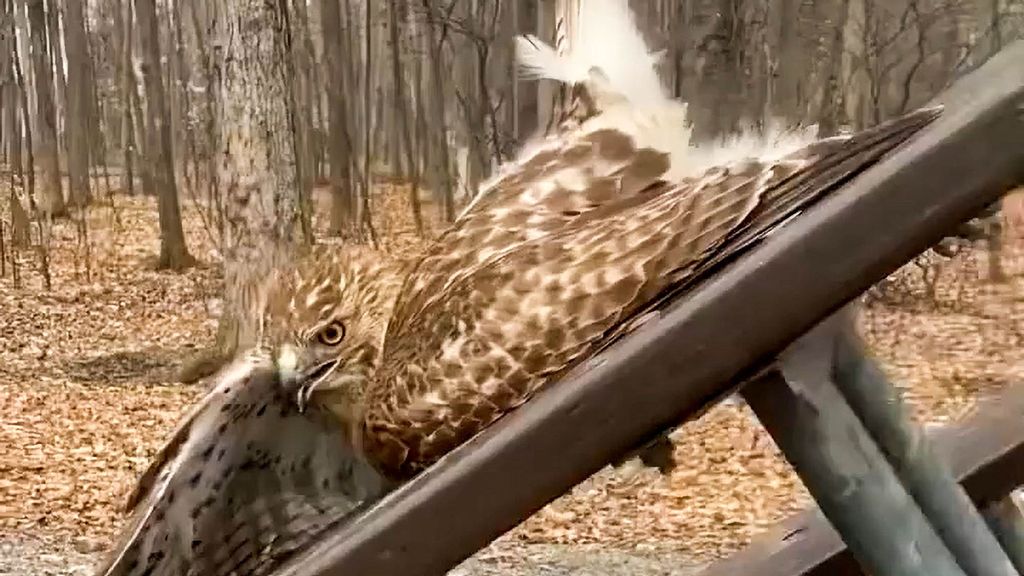 This is the moment a New York environmental cop rescues a red-tailed hawk with its leg trapped in a picnic table.

The Environmental Conservation Police Officer (ECO) from Orleans County in the US state of New York rescued the young red-tailed hawk (Buteo jamaicensis) in a picnic area where its leg was trapped in the table.

The environmental cop, named only as Officer Fonda, freed the bird of prey from the picnic table near the town of Carlton and released it unharmed.

New York State Department of Environmental Conservation said on April 18: “On April 4, Orleans County ECO Fonda responded to a complaint of a hawk in distress at Lakeside State Park in the town of Carlton.

“When Officer Fonda arrived, he found a juvenile red-tailed hawk with its leg caught in a picnic table, unable to free itself.

“ECO Fonda safely freed the hawk from its precarious perch and released it unharmed.”

Meanwhile, the New York State Department of Environmental Conservation said police in Suffolk County rescued a red-tailed hawk that was blocking a roadway.

The Department said in a statement: “On April 5, Suffolk County Police requested assistance with an injured bird of prey blocking the roadway. ECO DeRose responded and found a red-tailed hawk standing in the roadway, unable to gain height when attempting to fly.

“ECO DeRose was able to corral the hawk and safely capture it without causing further injury. ECO DeRose transported the hawk to a local wildlife rehabilitator who examined the bird and determined it had a laceration under one of its wings from an apparent car strike, but no broken bones.

“Rehabilitators cleaned the hawk, closed the laceration, and kept it for observation.

The department also reported that a young fox gave a homeowner in Nassau in New York State a fright when it fell into her outdoor enclosure.

The organization said: “On April 5, ECO Crain received reports from a homeowner in the town of Nassau claiming she heard an animal in distress that fell approximately five feet into an outdoor enclosure that surrounds their furnace exhaust pipe.

“When Officer Crain arrived, the homeowner advised that she saw an adult red fox pacing back and forth in her yard before she heard the noises. ECO Crain shined a light on the bottom of the enclosure and saw the kit (young fox) partially hidden underneath the furnace pipe.

“Using a cordless drill, the ECO removed the plywood cover to the enclosure and attempted to capture the kit with a catchpole. The kit, however, crawled underneath the pipe to avoid capture. ECO Crain then utilized a ladder to get into the pit to capture and release the kit uninjured.”