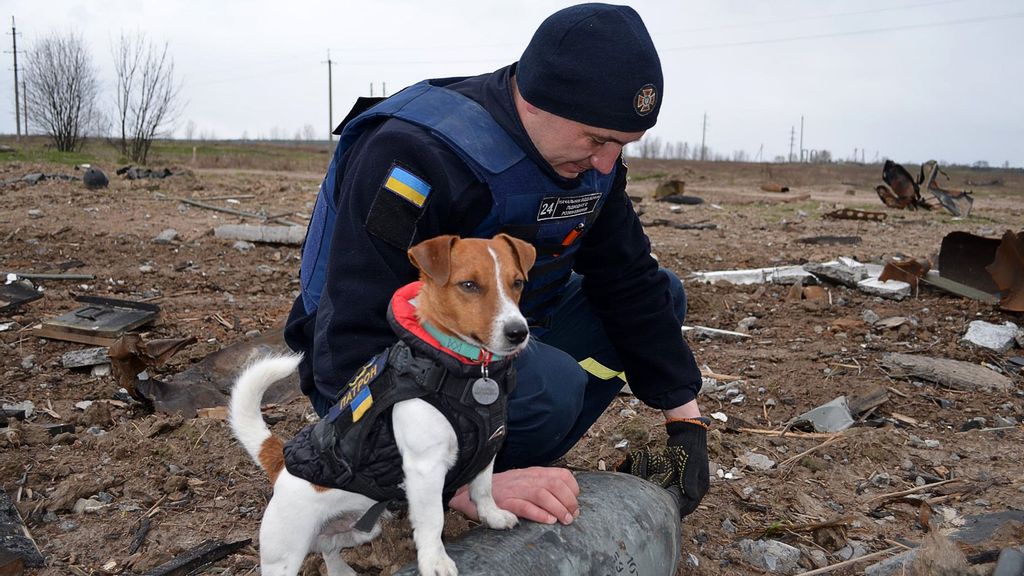 Zenger News obtained the photos and video from the State Emergency Service (SES) of Ukraine.

The SES said: “Shestovytsia, in the Chernihiv region. Burnt down by our Armed Forces.

“The power of the orcs’ technique. Among the broken tanks and armored vehicles, a huge number of shells, mortars, grenades, ammunition…

“Meter by meter SES sappers are clearing the territory of the settlement. And to make people aware of mine safety, rescuers are talking to locals and handing out warning postcards.

“Our sniffer dog Patron is loved by both adults and children.

“Friends, our work on cleaning the territories of unexploded ordnance continues. Be careful, do not rush back to your homes. Do not approach broken machinery, do not venture off the pavements, and do not go to the woods for now. This could be dangerous. Spotted a suspicious object? Call 101 or 102.”

Shestovytsia is a village in Ukraine’s northern Chernihiv region, which is currently undergoing a large-scale clean-up after Russian troops withdrew from the area to regroup in the east of the country.

The SES’s sniffer dog, Patron, had previously hit headlines around the world following his efforts to clear Ukrainian land of unexploded Russian ordnance.

A video of the two-year-old Jack Russell Terrier getting his reward of fresh cheese at the end of a long day helping disposal experts to track down landmines provided a rare heartening moment in a conflict marked by tragedy and suffering.

Russian troops are currently attempting to take Ukraine’s eastern Donbas region in a new offensive after they withdrew from areas north of the capital, Kyiv, which is located in the north-central part of the country.

It is believed that Moscow decided to focus its efforts on eastern Ukraine after Russian troops met stiffer resistance and sustained greater losses than expected.

The General Staff of the Armed Forces of Ukraine (AFU) reported earlier this morning that Russia had lost around 20,900 military personnel over the course of the invasion so far.