Jupiter, Venus, Mars and Saturn have lined up in a row in the early morning sky and will be visible for the rest of the month.
By Brian Lada April 21, 2022
Facebook
Twitter
Linkedin
Email 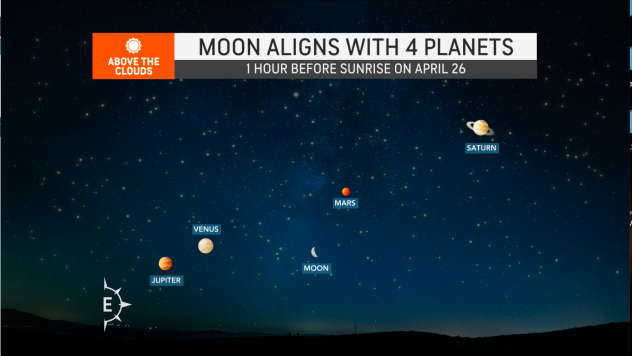 The planets will align and glow in the early morning sky. The rings of Saturn cannot be seen without a telescope. (Courtesy of AccuWeather)

Astronomy fans have a reason to get up early.

Those up before the crack of dawn will be rewarded with great views of the planets through the end of the month. The daily spectacle will be even more impressive at the start of next week.

Jupiter, Venus, Mars and Saturn have lined up in a row in the early morning sky and will continue to glow throughout the rest of April. The quartet can be seen without a telescope in the Eastern sky.

Plus, another celestial object will join the alignment early next week.

The crescent moon will appear near the four planets about an hour before sunrise on Monday, April 25, and Tuesday, April 26.

Viewers can check the AccuWeather forecast to see which morning on the two-day event will have the better viewing conditions.

A fifth planet will be hidden in plain sight near the bottom of the alignment. Neptune will appear near Venus and Jupiter on April 25 and April 26. However, it will be difficult to spot without the help of a telescope.

People new to using a telescope will have help finding the distant world as it will appear directly between Jupiter and Venus. Neptune will look like a small blue dot, distinct from the other planets and stars visible in this area of the sky before sunrise.

The morning planets will be worth another look on April 30 and May 1 as Jupiter and Venus pass extremely close to each other.

Astronomers refer to this type of planetary meetup as a conjunction. It will be the closest Jupiter and Venus have appeared in the night sky since Nov. 24, 2019.

Skywatchers should also keep an eye out for shooting stars as the annual Lyrid meteor shower remains active until April 29. An estimated 15 to 20 meteors per hour are expected on the night of April 21, but a few meteors are still possible throughout the early morning when the planetary alignment is visible.

Records of the Lyrids go back 2,700 years, according to EarthSky. The Lyrids are best seen during the second half of the night, but the moon could be a disruption this year.

Experts recommend nearby parks after sunset as great spots for stargazing, since they have less light pollution.

«Previous Post
Vanishing Act: Exploring The Case Of The Disappearing Moon»Next Post
Aliens May Be Living In The Icy Shell Of Jupiter’s Tiny Moon Europa, According To New Research