Aliens May Be Living In The Icy Shell Of Jupiter’s Tiny Moon Europa, According To New Research

The finding is based on an analysis of symmetrical landforms called double ridges.
By Anamarija Brnjarchevska April 21, 2022
Facebook
Twitter
Linkedin
Email 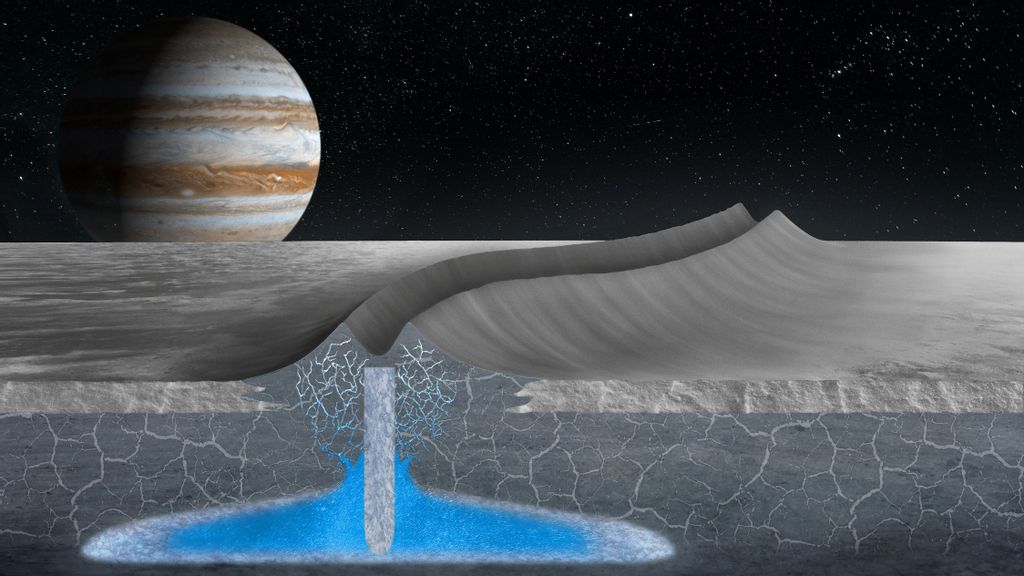 Aliens may be living in the icy shell of Jupiter's tiny moon Europa, according to new research. (Matthew Newby SWNS/Zenger)

Aliens may be living in the icy shell of Jupiter’s tiny moon Europa, according to new research.

The frigid world shares striking similarities with Greenland… which is home to weird jellyfish, slugs, shrimps, and snails.

Life could have evolved in shallow pockets of water near the surface, say scientists.

The finding is based on an analysis of symmetrical landforms called double ridges. They stretch for hundreds of miles across the surface, flanking a shallow trough.

Ice-penetrating radar observations captured the formation of the same type of geometrical feature in northwest Greenland.

It is compelling evidence of potentially habitable environments within the exterior of the Jovian satellite.

Senior author Professor Dustin Schroeder, of the University of Stanford, California, said: “Because it is closer to the surface, where you get interesting chemicals from space, other moons, and the volcanoes of Io, there is a possibility life has a shot if there are pockets of water in the shell.

“If the mechanism we see in Greenland is how these things happen on Europa, it suggests there is water everywhere.”

The discovery was serendipitous. Prof Schroeder is an expert on global warming – rather than extraterrestrials.

He explained: “We were working on something totally different related to climate change and its impact on the surface of Greenland when we saw these tiny double ridges – and we were able to see the ridges go from ‘not formed’ to ‘formed’.”

Upon further examination, they identified a miniature version of the most prominent features on Europa – which is mostly flat.

Professor Schroeder described them as “dramatic gashes”, reaching nearly 1,000 feet and separated by valleys about half a mile wide.

They were first photographed by the Galileo spacecraft in the 1990s. An explanation of how they formed has remained a mystery – until now.

The study in Nature Communications used data collected from 2015 to 2017 by NASA’s Operation IceBridge which monitors Earth’s polar ice.

It revealed Greenland’s double ridge was produced when ice fractured around a pocket of pressurized water that was refreezing inside – causing two peaks to rise into a distinct shape.

Lead author Riley Culberg, a Ph.D. student in electrical engineering at Stanford, said: “In Greenland, this double ridge formed in a place where water from surface lakes and streams frequently drains into the near-surface and refreezes.

“One way that similar shallow water pockets could form on Europa might be through water from the subsurface ocean being forced up into the ice shell through fractures – and that would suggest there could be a reasonable amount of exchange happening inside of the ice shell.”

Rather than behaving like a block of inert ice, the shell seems to undergo a variety of geological and hydrological processes.

The theory is supported by this study and others – including evidence of water plumes that erupt to the surface.

A dynamic ice shell, which is about 60 miles thick, backs habitability. It facilitates the exchange between the subsurface ocean and nutrients from neighboring celestial bodies accumulated on the surface.

“But this is the first time we were actually able to watch something similar on Earth and see nature work out its magic.

“We are making a much bigger step into the direction of understanding what processes actually dominate the physics and the dynamics of Europa’s ice shell.”

The moon harbors a deep salty ocean beneath the ice – which has long captivated alien hunters.

Prof Schroeder said: “The mechanism we put forward in this paper would have been almost too audacious and complicated to propose without seeing it happen in Greenland.”

Culberg added: “We are another hypothesis on top of many – we just have the advantage ours has some observations from the formation of a similar feature on Earth to back it up. It’s opening up all these new possibilities for a very exciting discovery.”

It may be just as fertile as oceans. Bacteria have been found buried deep beneath the Antarctic ice sheet.

Space scientists have long been intrigued by the possibility of finding extraterrestrial life forms in ice-covered worlds far from Earth, especially on Europa.

The ice surface of Europa is streaked with reddish-brown cracks, possibly caused by micro-organisms suspended in the ice.

Minerals from the rocky interior are seeping through cracks in the ice and getting blasted by UV radiation from the sun – lending Europa its blushing red surface.

That same UV radiation can break apart water molecules – allowing oxygen to sink back down into the ocean.

They are just the kinds of ingredients life needs to get started in a watery environment.