In the footage, a Russian fighter jet is seen taxiing on the runway before taking off into the sky.
By Lee Bullen April 21, 2022
Facebook
Twitter
Linkedin
Email 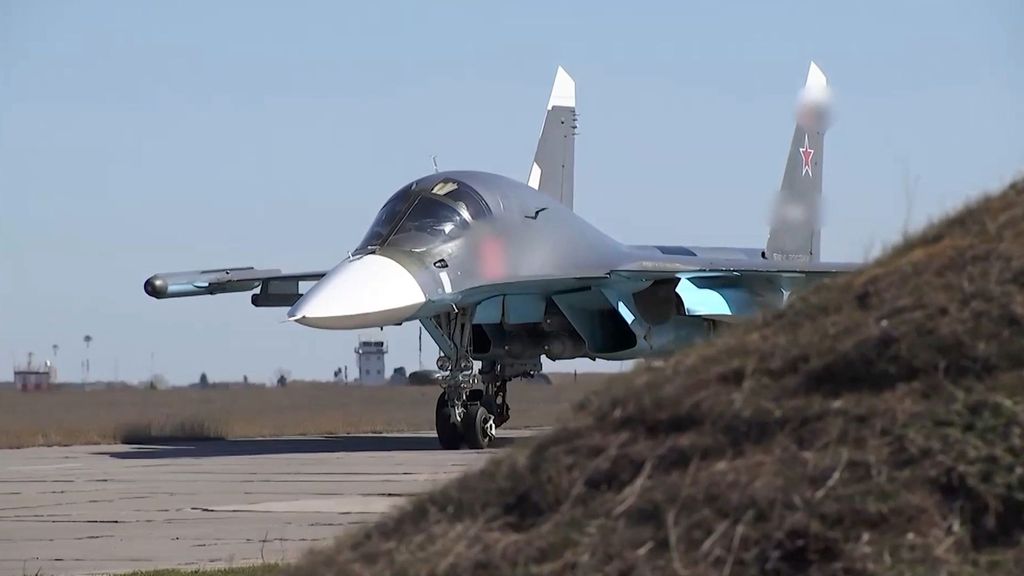 Russian Army using the Sukhoi Su-34 bombers launched an air strikes on fortified positions of the Armed Forces of Ukraine, in April, 2022. (Ministry of Defence of the Russian Federation/Zenger)

This is the moment Russian fighter jets take to the sky and reportedly carry out strikes on key Ukrainian strongholds and weapons depots.

The Russian Ministry of Defense (MoD) said the airstrikes, carried out by single planes and in pairs, successfully destroyed Ukrainian fortified structures and depots for weapons and ammo, including NATO-supplied systems.

In a statement obtained by Zenger News, the Russian MoD said: “In the course of performing a combat mission, the crews of the Russian Aerospace Forces took part in practical airstrikes against hidden long-term fortified structures used by nationalist formations and depots with weapons and ammunition, including foreign-made ones.”

The Russian MoD added: “Airstrikes were carried out by single planes and in pairs.

“The results of the defeat of ground targets were recorded by the means of objective control of the aircraft as well as unmanned aerial vehicles.”

In the footage, a Russian fighter jet is seen taxiing on the runway before taking off into the sky.

The next scene shows two combat planes in the sky, apparently heading to the Ukrainian targets, before dropping several bombs in the same area.

At least three huge fireballs fill the air before two Russian jets fly back to base and land on the runway, ready for the next mission.

Russia invaded their neighbors Ukraine on February 24 in what the Kremlin called a “special military operation”.

Today marks the 56th day of the invasion. From February 24 to April 20, the total combat losses of Russian troops stand at 20,900 personnel, according to the General Staff of the Armed Forces of Ukraine.

A Ukrainian marine commander reportedly holed up with troops and civilians at the Azovstal steel plant in Mariupol has refused Russians calls to surrender and requested today from world leaders to be evacuated to a third country.