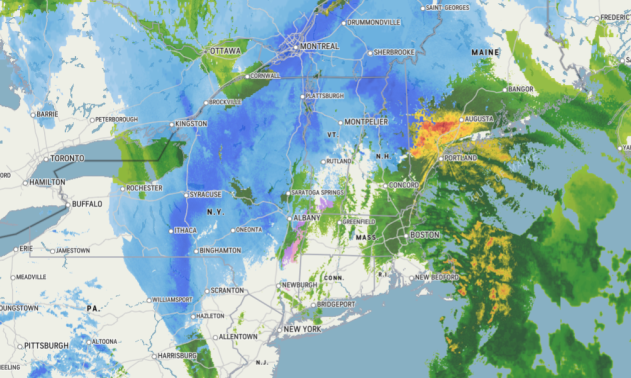 A radar image showing a large storm system bringing rain, snow and even a mix of snow and rain across the Northeast during the morning of April 19, 2022. (Courtesy of AccuWeather)

Winter made an appearance in the northeastern United States on Monday, despite the calendar reading April.

With atmospheric conditions primed for snow in the region, thanks to a large storm system, winter weather blanketed several states Monday and into early Tuesday morning.

Residents reacted to the storms, with many shocked by the wintry sight. “Two days ago, it was near 80 (degrees F), today it’s snowing. Gotta love Maryland weather,” one Maryland citizen commented via Twitter.

The sarcastic reply highlighted the lack of enthusiasm from residents who are wanting true springlike weather. Another comment summed up the situation in one word: “Yuck!”

The highest snowfall totals came out of central New York near the Catskill Mountains and northern Pennsylvania. Early Tuesday morning, 16 inches were reported at Indian Lake, New York, located around 80 miles northwest of Albany. Just near the Pennsylvania border, 12 inches of snow was recorded in the New York towns of Windsor and Hartford.

The highest snowfall total in Pennsylvania was just south of the New York border in Montrose, where 12 inches of snow fell.

Snow was limited to the interior Northeast, with precipitation falling as rain for most of the Interstate-95 corridor.

Gusty winds accompanied the late-April storm with a gust of 31 mph clocked at Martha’s Vineyard, an island off the Rhode Island coastline, according to the National Weather Service. On the northern tip of Cape Cod, the wind gusted to 37 mph early Tuesday morning.

The National Weather Service (NWS) office in Norton, Massachusetts, lost power around 12:30 a.m. local time, resulting in its radar being shut down while the peak of the storm passed through its forecast area. Just before 4 a.m. EDT, the power was restored and the radar became operational again.

On early Tuesday morning, Binghamton, New York, reported three inches of snow in just one hour, an impressive hourly snowfall rate for a snowstorm regardless of the month.

As of 2 AM EDT, we’re up to 6.0 inches at NWS Binghamton (1,577 feet). 3 inches fell in just the past hour! Also, we’ve lost commercial power, but have backup generators here and at the radar.

The odd timing of the snowstorm impacted the spring’s signature sport.

Progressive Field, home to Major League Baseball’s Cleveland Guardians, had a coating of snow Monday morning. This became the impetus for the Guardians to postpone a scheduled Monday contest with the Chicago White Sox, rescheduling the April game for July.

The other Chicago squad, the Chicago Cubs, saw its iconic Wrigley Field also hit with snow approximately 90 minutes before a game with the Tampa Bay Rays. The Cubs game was not postponed, leading to the house organ instrument playing a rendition of “Let It Snow.” Although not snow-related, the same storms forced a postponement of a clash between the New York Mets and San Fransisco Giants, due to rain.

The cold and snowy weather across the Northeast will give way to more seasonable warmth during the second half of the week, allowing most of the snow to melt.