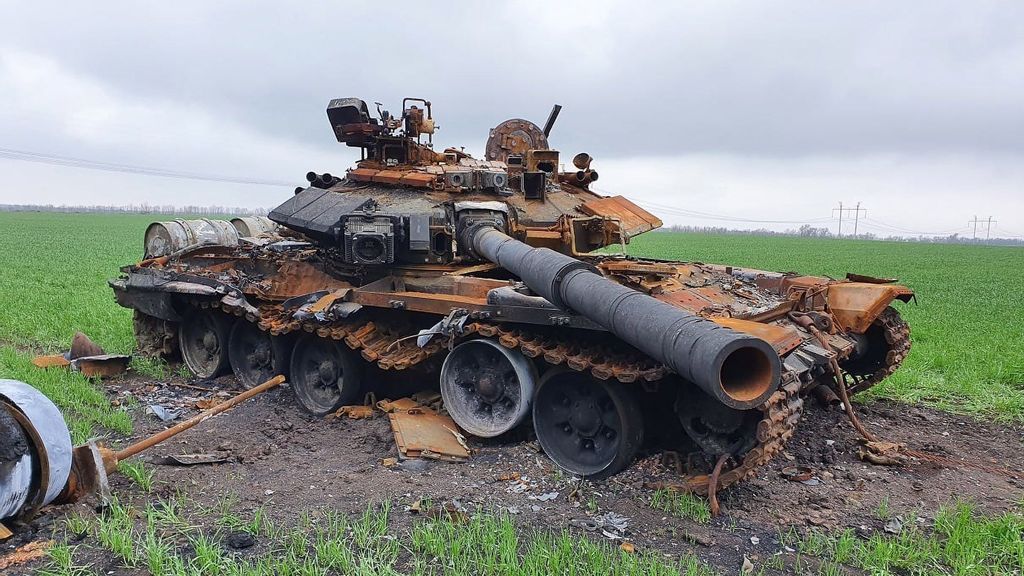 The images show a Ukrainian soldier posing in front of the destroyed vehicle and in a statement from the General Staff of the Armed Forces of Ukraine made yesterday (Tuesday, April 19), they claimed that the images show a T-90 ‘Vladimir’ tank destroyed by the “Transcarpathian Legion (128 OGShBr).”

The Transcarpathian Legion is also known by its official name, the 128th Separate Mountain Assault Zakarpattia Brigade. It has been fighting pro-Russian separatists in the Donbas region since 2014 and can trace its history back to 1922, making it one of the oldest military formations in the Ukrainian Ground Forces.

The Ukrainian General Staff added: “The main battle tank of the Russian Army – highly advertised and praised, exported to many countries. With the ‘Ainet’ system, which allows you to fire shells with remote detonation, laser sight-rangefinder and thermal imaging cameras.”

The Ainet system is a fuse setting system that allows the tank to detonate a special round at a specific distance instead of the round detonating on impact, making it highly effective against infantry and attack helicopters.

The Ukrainian General Staff also said: “The cost of this modern machine is about 4 million dollars. The assailants of our brigade destroyed it with one shot from an anti-tank RPG.

“Apparently, the missile flew to the right, and after its explosion detonated ammunition.”

It is understood that the Ukrainian forces reportedly fired a rocket-propelled grenade, a shoulder-fired missile, at the tank, that then detonated its ammunition storage compartment.

The T-90 is a third-generation Russian main battle tank. A large number of them have been reported destroyed by Ukrainian forces, despite supposedly being equipped with defensive technology designed to protect them against rocket launcher attacks.

But researchers at the Modern War Institute at West Point have said that “gunners using the ITAS (improved target acquisition system) should never directly laser the tank with the range finder, instead targeting a patch of ground three vehicle lengths away.”

It is unclear if the Ukrainian soldiers worked out this tactic themselves by trial and error during combat or if they were taught it by American advisers.