Up to 20 meteors per hour will appear during the height of the Lyrid shower.
By Brian Lada April 20, 2022
Facebook
Twitter
Linkedin
Email 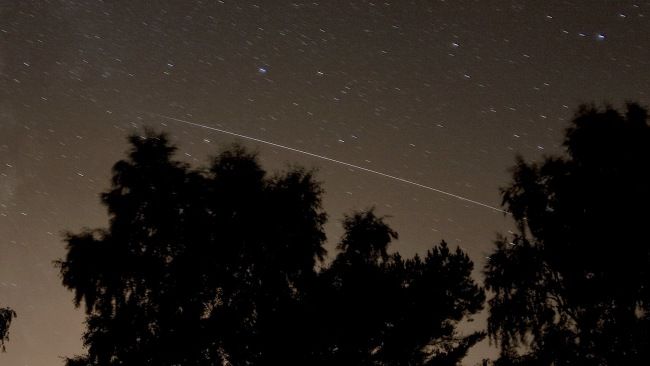 A meteor streaking through the night sky over England. (David Warrington)

A star-studded show is booked for this week.

Seeing a shooting star dash across the night sky can be a breathtaking sight. Later this week, a flurry of meteors will give sky watchers ample opportunities to spot these celestial fireworks.

The Lyrid meteor shower peaks on Thursday night, April 21, into Friday morning, April 22, Earth Day. This is one of the oldest meteor showers in history. Records of the Lyrids go back 2,700 years, according to EarthSky.

Nearby parks after sunset can be great spots for stargazing, as they have less light pollution.

Up to 20 meteors per hour will streak across the sky during the height of the Lyrids, a typical rate for most meteor showers throughout the year. However, what makes the Lyrid event special is that it marks the end of a meteor shower drought that started on the second night of 2022.

The most recent meteor shower was the Quadrantids, which peaked on Jan. 2. Not only did this shower occur on a cold winter night, but it is one of the shortest annual meteor showers, lasting just a few hours, making it a challenge to observe.

The Lyrids are best seen during the second half of the night, but the moon could be a disruption this year.

The bright moon is set to rise around 2 a.m. local time. Once the moon is above the horizon, the moonlight will make it difficult to spot some dimmer meteors, experts say.

Given this, the best window for viewing the 2022 edition of the Lyrids will occur between midnight and moonrise. Viewers can still spot meteors after moonrise, but the shooting stars will mainly be visible in the darker areas of the sky away from the moon.

Meteors will radiate from the northeastern sky near the constellation Lyra, but they can appear in any area of the sky, not just near the radiant point.

In addition to the disruptive light from the moon, clouds will be an issue for some observers.

The best viewing conditions are anticipated across the southern High Plains, the southeastern U.S. and part of the Great Lakes region into the Canadian provinces of Ontario and Quebec. Mainly cloud-free weather in these areas will benefit folks who head outside on Thursday night to spot meteors.

Widespread clouds across the western U.S. into the northern Plains and Canadian Prairies could obscure most of the Lyrids on peak night, AccuWeather forecasters say. Clouds will also block out part or most of the sky over the Ohio Valley, mid-Atlantic, New England and into Atlantic Canada on Thursday night.

The Lyrids will continue through the weekend, so people who find themselves under a cloudy sky on Thursday night can try their luck at meteor watching on Friday night and Saturday night.

However, hourly rates on these nights will be slightly lower than the 15 to 20 per hour expected on Thursday night.

After waiting more than three months between the Quadrantids and the Lyrids, skywatchers will not have to wait nearly as long for the next chance to spot shooting stars.

The Eta Aquarid meteor shower will peak on the night of May 4 into May 5, once again featuring around 15 to 20 meteors per hour for observers in the Northern Hemisphere.