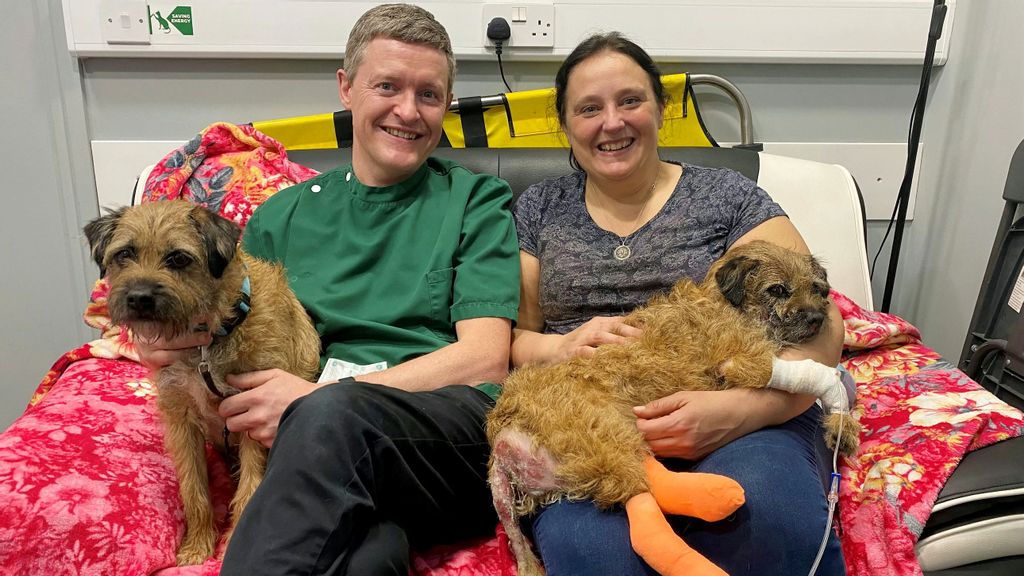 A miracle dog survived 12 DAYS trapped down a badger sett after her owner refused to give up hope and camped out in the woods waiting for her safe return. (Steve Chatterley/Zenger)

A miracle dog survived 12 days trapped down a badger den after her owner refused to give up hope and camped out in the woods waiting for her safe return.

Victoria Hogan, 46, was left devastated when her border terrier Freda became trapped underground after darting down the hole during a walk.

Victoria carried out an eight-day vigil by setting up camp at Lickey Hills Country Park, near Birmingham, in the United Kingdom, in the vague hope she would emerge.

She even attempted to coax her beloved pet out by cooking bacon and blowing the aroma down the hole using a leaf blower but to no avail.

Incredibly, 12 days later, the six-year-old pooch remerged and was found by three students, collapsed by a roadside.

Freda was rushed to Blacks Vets’ veterinary hospital in Dudley, in the West Midlands, for urgent treatment for dehydration, malnutrition, pressure sores and cuts and scrapes.

She is now back at her home in Lickey, in Worcestershire. with owners Victoria, husband Brian, 52, and their other terrier Bert after recovering from the dramatic ordeal.

Victoria, who works alongside her husband at the same vet’s, said: “I camped out for eight days in the hope that Freda would somehow miraculously re-emerge.

“The Badgers Trust and RSPCA really supported us, while Hereford and Worcester fire service even used specialist listening devices and cameras to try to locate her but there was no trace.

“On day eight, I just said to myself ‘I have to give up and begin to grieve’ and went back home, although I did leave her blanket and bowl behind in the park just in case.

“Then, on day 12, I was told three students had found Freda collapsed at the side of a nearby road and I initially feared the worst and thought it must be her dead body.

“When I was told she was alive it felt like a miracle and I ran out of the house to find her.

“She was very weak and bedraggled but she was alive, so we rushed her to Blacks Vets 24/7 emergency hospital in Dudley where my husband Brian is based.

“They were so supportive and accommodating from the moment it happened.

“At first, I rang in to say I’d be late as Freda had disappeared and then it developed into I wouldn’t be going in that day and, finally, could I take leave at short notice to search for her.

“I was so grateful but it was when Freda was found that they really came into their own.

“We called ahead to say we were on our way to the hospital and by the time we arrived the nurses and emergency team had already organized a heated bed, had fluids and pain relief ready and were all geared up to treat her wounds.

“Some of our colleagues even came in to help, even though they were not on duty.

“They were all fabulous and I now fully realize just how important it is for a vet’s to provide a 24/7 emergency service that can make the difference in cases such as Freda’s.”

Brian, who is the clinical director of Blacks Vets, added: “I’ve been a vet for almost 30 years but Freda’s story is one of the most incredible I’ve ever known.

“She was severely malnourished and dehydrated and had some significant pressure sores as a result of being trapped and wedged underground for so long but, thankfully, nothing that she could not overcome.

“She was hospitalized for two days here at Blacks for treatment and then allowed home to be reunited with her brother Bert and the rest of the family, which was obviously a very happy occasion indeed.”