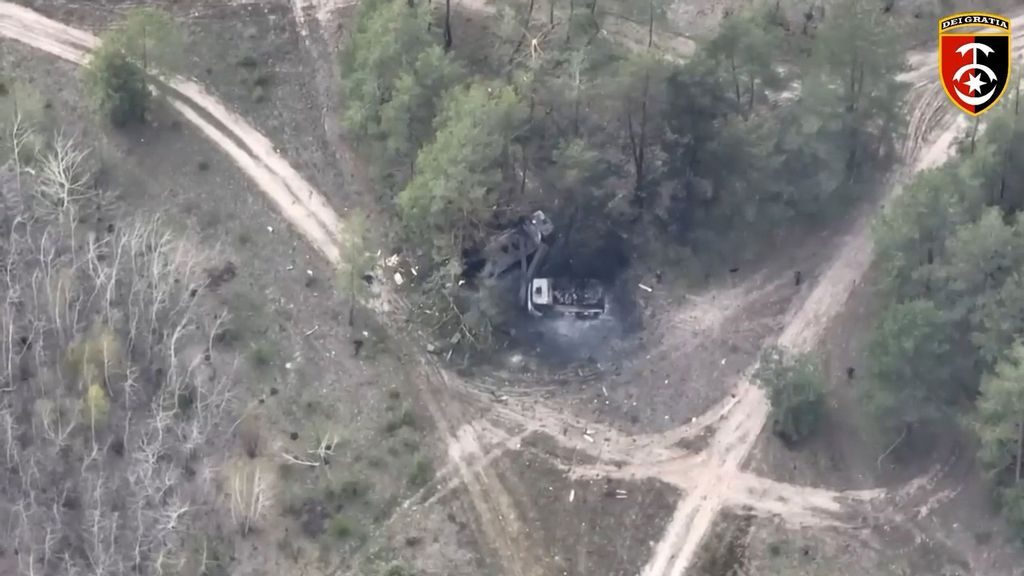 This is the moment Ukrainian troops bomb a Russian hideout in the woods.

The attack was carried out by the 30th Mechanized Brigade, named after Prince Konstanty Wasyl Ostrogski, of the Ukrainian Ground Forces in eastern Ukraine.

Zenger News obtained images of the attack from the brigade on April 18 and they said: “Let’s drive the enemy from our land!”

In the footage, bombs are seen exploding in the treeline of a Ukrainian forest.

At the end of the clip, an area of the woodland has been burned away, apparently exposing at least two Russian armored vehicles that were previously covered by the trees.

The footage comes as Russian forces embark upon their large-scale battle for Ukraine’s eastern Donbas region.

The small city of Kreminna fell to Russian forces overnight from Sunday to Monday, with the Kremlin’s sights now apparently set on key target Kramatorsk.

Seven reportedly died when several missiles struck the UNESCO-listed city of Lviv, in western Ukraine, which had largely remained untouched since the invasion began.

Over 4.9 million have now fled the country due to the invasion, the United Nations is reporting.

And Ukraine has handed in a questionnaire to the European Union (EU) in its bid to gain candidate status so it can fully join the bloc in the future.

Russian President Vladimir Putin is firmly opposed to Ukraine joining NATO but is said to be open to the idea of the country joining the EU if it stays out of the western military alliance.

Russia invaded their neighbors Ukraine on February 24 in what the Kremlin has called a “special military operation”.

Today marks the 55th day of the invasion. From February 24 to April 19, the total combat losses of Russian troops stand at 20,800 personnel, according to the General Staff of the Armed Forces of Ukraine.